Karl Heinrich Georg Ferdinand Kreipe (5 June 1895 – 14 June 1976) was a German career soldier who served in both World War I and World War II. While leading German forces in occupied Crete in April 1944, he was abducted by British SOE officers, Patrick Leigh Fermor and William Stanley Moss, with the support of the Cretan resistance.[1][2][3]

Born in 1895, Kreipe volunteered for the army at the start of World War I. After the war, he joined the Freikorps, and then the new Reichswehr in October 1919. By 1939, Kreipe had attained the rank of colonel in the Wehrmacht.

As commander of Infantry Regiment 209 of the 58th Infantry Division, Kreipe participated in the Battle of France and the drive towards Leningrad during Operation Barbarossa. He was awarded the Knight's Cross of the Iron Cross on 13 October 1941. Kreipe remained in the Leningrad front until May 1942, when he was transferred back to Germany, where he took up administrative and teaching positions. In June–October 1943, he was returned to the Eastern Front, where he led the 79th Infantry Division. On 1 March 1944, Kreipe was appointed Commander of the 22nd Air Landing Infantry Division, operating on Crete, replacing General Friedrich-Wilhelm Müller, who had been made the German commander of Crete in Hania.

Abduction by Greek and British agents

In the spring of 1944, a plan was hatched by the Allies to kidnap General Müller, whose harsh repressive measures had earned him the nickname "the Butcher of Crete". The operation was led by Major Patrick Leigh Fermor, and second Captain Bill Stanley Moss, Greek SOE agents and Cretan resistance fighters. However General Müller left the island before the plan could be executed. Major Fermor decided to abduct Kreipe instead. 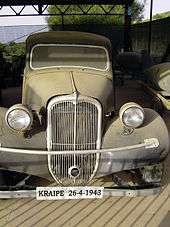 On the night of 26 April, General Kreipe left headquarters in Archanes. The car headed without escort to a well-guarded residence, "Villa Ariadni", about 25 km outside Heraklion. Major Fermor and Captain Moss, dressed as German military policemen, waited for him 1 km before his residence. When he arrived, they asked the driver to stop and asked for their papers. As soon as the car stopped, Fermor opened Kreipe's door, jumped in, and threatened him with his pistol, while Moss took the driver's seat. (The abduction is now commemorated near Archanes.)[4] Moss drove the kidnappers and the General for an hour and a half through 22 controlled road blocks in Heraklion, before leaving Leigh Fermor to drive on and abandon the car, with material being planted that suggested their escape from the island had been made by submarine. Moss set off with the General on a cross-country march supported by the Greek resistance, soon rejoined by Leigh Fermor. Hunted by German patrols, the kidnappers crossed the mountains to reach the southern side of the island, where a British Motor Launch (ML 842 commanded by Brian Coleman) was waiting to rendez-vous. Eventually, on 14 May 1944, they were picked up from Peristeres beach near Rhodakino and ferried to Egypt.

Kreipe was interrogated, and then sent to a POW camp in Canada. Later transferred to a special camp in Wales,[5] Kreipe was finally released from British captivity in 1947. General Kreipe met his kidnappers one more time in 1972 on a Greek TV show.[6] He died at Northeim on 14 June 1976.