The kidnap of General Heinrich Kreipe was a Second World War operation by the Special Operations Executive (SOE), an organisation of the United Kingdom. The mission took place on the German occupied island of Crete in May 1944.[1][2]

On 1 March 1944, Kreipe was appointed Commander of the 22nd Air Landing Infantry Division operating on Crete, replacing General Friedrich-Wilhelm Müller, who had been made the German commander in the Dodecanese and who had a reputation for brutality towards the Cretan people. The SOE team of Major Patrick Leigh Fermor and Captain William Stanley Moss[3] had planned to abduct Müller, but when he was replaced, proceeded with their plans and targeted Kreipe instead. Helped by Cretan resistance fighters, the SOE team successfully abducted Kreipe and managed to evade the German troops searching for them. When the team reached the coast, they were picked up by the Royal Navy and taken to Egypt.

These events were portrayed in Moss's book Ill Met by Moonlight.[4][5] and Leigh Fermor's book, Abducting a General.[6]

The British Army and allied forces from various countries of the British Commonwealth had been driven out of Crete after the Battle of Crete in May 1941. Following the evacuation of the surviving British forces, the Special Operations Executive landed agents on the island to assist and advise the Cretan resistance movements. They had a number of objectives including liaison, intelligence gathering, preparing the local resistance and assisting escapers and evaders to leave the island.[7]

Major Patrick Leigh Fermor and Captain William Stanley Moss hatched the plan in Cairo for the abduction of General Friedrich-Wilhelm Müller, the military governor in Crete and commander of the 22nd Airlanding Division. Müller had a reputation for brutality and was despised by the Cretan people, and the Special Operations Executive planned to kidnap him and transport him to Egypt.[8]

Leigh Fermor’s strategy was to undertake a bloodless operation that would be attributed to British forces alone in order to avoid direct reprisals being meted out against the Cretan population. In this, he was successful.[9][10][11] 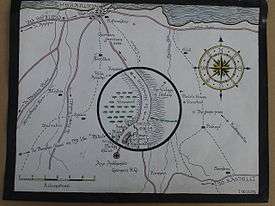 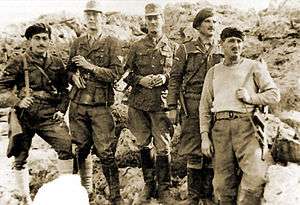 On 4 February 1944, Major Patrick Leigh Fermor, Captain William Stanley Moss, and two Cretan SOE agents, Georgios Tyrakis and Emmanouil Paterakis, left Egypt by plane for Crete. Their intention was to parachute into Crete but after arriving at the drop zone, only Leigh Fermor was able to parachute successfully. The others had to abandon the attempt due to bad weather and were returned to Egypt. On landing Leigh Fermor was met by a group from the Cretan resistance, with whom he remained until the arrival of the rest of the SOE team.

Moss and the other two tried three more times by aircraft to land and eventually, after two months of attempts they arrived by Motor Launch ML 842 on 4 April 1944. They were met on the beach by Leigh Fermor and another SOE agent, Sandy Rendel.[12] Their target General Müller was replaced by General Kreipe on 15 February just before they arrived by sea. They decided, nevertheless, to go ahead with their plan with General Kreipe now their target.[13]

The SOE team now included a number of Cretans: Antonios Papaleonidas "Wallace Beery", Michail Akoumianakis "Mikis" and Grigorios Chnarakis. Mikis was especially welcome as his house was across the road from Kreipe's residence, the Villa Ariadne, in the village of Knossos.[13] The team reconnoitred the area and planned the abduction. Leigh Fermor dressed as a Cretan shepherd, and travelled on the local bus to check Knossos and the area around the German headquarters. From his reconnaissance Leigh Fermor decided that the German headquarters would be too difficult to penetrate.

After a few days of alternately observing the comings and goings of the General, they finalized the details of the abduction. The plan was for the two British officers, dressed as corporals in the Feldgendarmerie (German military police), to stop the general's car on his way home at what was supposed to be a routine check point.[14]

On the night of 26 April 1944, the two British officers stopped the General's car before the Villa Ariadne. When the car stopped, Leigh Fermor and Paterakis took care of Kreipe and Moss struck the driver with his cosh, supported by Tyrakis.[15][16] The driver, Unteroffizier Alfred Fenske, was later found dead. Moss drove the team (Saviolakis, Tyrakis and Paterakis holding the General on the back seat) in the General's car with Leigh Fermor impersonating the General and Moss, the driver, for an hour and a half through 22 controlled road blocks in Heraklion before leaving Leigh Fermor to go on and abandon the car. When he left the car, he also left documents, revealing that the kidnapping had been done by British Commandos and no reprisals should be taken against the local population.

Moss set off with the General and his Cretan escorts across country, to a rendezvous where they would be joined by Leigh Fermor. Hunted by German patrols, the group moved across the mountains to reach the southern side of the island, where Major Dennis Ciclitira had arranged for a British Motor Launch (ML 842 commanded by Brian Coleman) to pick them up. The route took them over Mount Ida, in Greek mythology the birthplace of Zeus, where Kreipe is said to have recited the first line of Horace's "Ode Ad Thaliarchum [1.9.1]" (in Latin) on seeing the white peak: "Vides ut alta stet nive candidum Soracte" ("You see how Mount Soracte stands white with deep snow") at which point Leigh Fermor, a keen reader of Horace, recited the rest of the poem.

Leigh Fermor later recounted that each had realised they had "drunk at the same fountains" of learning.[17]

The SOE team and the general were finally picked up from a beach near Rodakino, from Peristeres beach, on the southern side of the island on 14 May 1944. They were transported to safety, landing at Mersa Matruh in Egypt.[18]

After the war, a member of Kreipe’s staff reported how, on hearing the news of the kidnap, an uneasy silence in the officers' mess in Heraklion was followed by – "Well gentlemen, I think this calls for champagne all round."[19]

Postwar correspondence explains that Kreipe was disliked by his soldiers because, amongst other things, he objected to the stopping of his own vehicle for checking in compliance with his commands concerning approved travel orders. This tension between the General and his troops, in part, explains the caution of sentries in considering stopping the General’s car as Moss drove it through Heraklion.[9] Allied propaganda efforts attempted to suggest that the kidnapping was a cover story and that Kreipe had actually defected to the Allies, possibly out of fear of death during an Allied invasion.

The Germans did not retaliate directly for the kidnap. However, in August 1944 the village of Anogia and several villages in the Amari valley were destroyed and many Cretans massacred. A Proclamation was issued with regard to the destruction of Anogia, citing the villages' involvement in recent attacks on German forces, including the Damasta sabotage a few days earlier, as well as its support for the resistance and that Kreipe had passed through the area.

Müller, now the German commander in Crete, had further strategic reasons for reprisals and terror across Crete in order to assist the German planned evacuation from much of the island to Chania as well as not wishing to let Anogia go unpunished for years of resistance. Anogia dwellers had been actively involved in, and given refuge to, the resistance for many years, had killed the Sergeant Commander Olenhauer and the garrison from Yeni-Gave and had also provided shelter to the abductors of General Heinrich Kreipe. His order of the day to destroy Anogia was specific and retrospective.[20] His Order reads:-

"ORDER BY THE GERMAN GENERAL COMMANDER OF THE GARRISON OF CRETE – "Because the town of Anogia is the centre of the English Intelligence on Crete, because the people of Anogia committed the murder of the Sergeant Commander of the Yeni-Gave, as well as of the garrison under his orders, because the people of Anogia carried out the sabotage of Damasta, because in Anogia the guerrillas of the various groups of resistance take refuge and find protection and because it was through Anogia that the kidnappers with General Von Kreipe passed using Anogia as a transit camp, we order its COMPLETE DESTRUCTION and the execution of every male person of Anogia who would happen to be within the village and around it within a distance of one kilometre" CHANEA 13TH AUGUST 1944, THE GENERAL COMMANDER OF THE GARRISON OF CRETE, H. MULLER.

No Proclamation was made for the Amari massacres, although the German propaganda paper Parateretis cited the kidnap of Kreipe as the main reason for the destruction and murder. Recent Wehrmacht documents of the time, found in the Leigh Fermor Archive in the National Library of Scotland, describe the reasons - to suppress resistance activity, with no reference to Kreipe. The Germans needed to protect their flank from attack as they were about to withdraw from Heraklion and Rethymno towards Chania along the northern coast road.[21] Müller was captured at the end of the war and executed by the Greek government for war crimes.

For their part in the successful kidnapping Major Patrick Leigh Fermor was awarded the Distinguished Service Order, and Captain William Stanley Moss the Military Cross, "For [their] outstanding display of courage and audacity", the awards were gazetted on 13 July 1944.[24]

These events were portrayed in Moss's book Ill Met by Moonlight: The Abduction of General Kreipe. In 1957, the book was turned into the film starring Dirk Bogarde, David Oxley and Marius Goring.[25]