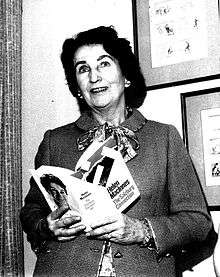 Helen Clark MacInnes was born on October 7, 1907 in Glasgow to Donald MacInnes and Jessica McDiarmid. She was reared in a traditional Scots Presbyterian[2] upbringing. Helen Clark MacInnes graduated from the University of Glasgow in Scotland in 1928 with a degree in French and German. After her M.A. in 1928, MacInnes continued her studies at University College, London, where she received a diploma in librarianship in 1931.

While working as a librarian, MacInnes met and married the classics scholar Gilbert Highet on September 22, 1932, and they moved to New York City in 1937.[3]

In the 1930s, MacInnes collaborated with Highet to translate German literature, which helped finance their summer travels through Europe. These European excursions gave MacInnes the exposure to the locations which would become the exotic settings of her espionage thrillers in later years.[3]

MacInnes accepted an appointment as a special cataloger for the Ferguson Collection at the University of Glasgow. She also helped the Dunbartonshire Education Authority to select books for county libraries. In 1932, Gilbert Highet accepted a classics teaching appointment at St. John's College, Oxford and while in Oxford, MacInnes served as an amateur actress with the Oxford University Dramatic Society and the Oxford Experimental Theatre.[4]

Gilbert Highet served as an MI6 British intelligence agent, in addition to working as a classics scholar. Obviously, her husband's work in intelligence became a significant influence on the subject matter of MacInnes's novels. (Apparently Highet continued his work with MI6 even after moving to the U.S. in 1937.[5]) Highet accepted appointment as a professor and chairman of the department of classics (Latin and Greek) at Columbia University in New York City in 1937.[4] During the following 45 years, MacInnes wrote 21 espionage thrillers, four of which were later made into movies. MacInnes became a U.S. citizen in 1952.

MacInnes's second novel, Assignment in Brittany (1942), was required reading for Allied intelligence agents who were being sent to work with the French resistance against the Nazis. Her 1944 book, The Unconquerables, carries such an accurate portrayal of the Polish resistance that some thought she was using classified information given to her by her husband.[5]

In her later books, she shifted her subject matter from World War II to the Cold War and continued to produce about one book every two years until her final novel Ride a Pale Horse (1984). Gilbert Highet died in 1978 and Helen MacInnes died in New York City on September 20, 1985.

MacInnes's writing also reflects an affinity for Arthur Koestler and Rebecca West, with her strong opposition to any form of tyranny and totalitarianism.[3]

In 1966 she won the Columba Prize for Literature.