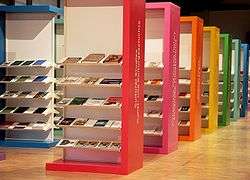 German literature comprises those literary texts written in the German language. This includes literature written in Germany, Austria, the German parts of Belgium and Switzerland, Liechtenstein, South Tyrol in Italy and to a lesser extent works of the German diaspora. German literature of the modern period is mostly in Standard German, but there are some currents of literature influenced to a greater or lesser degree by dialects (e.g. Alemannic).

Medieval German literature is literature written in Germany, stretching from the Carolingian dynasty; various dates have been given for the end of the German literary Middle Ages, the Reformation (1517) being the last possible cut-off point. The Old High German period is reckoned to run until about the mid-11th century; the most famous works are the Hildebrandslied and a heroic epic known as the Heliand. Middle High German starts in the 12th century; the key works include The Ring (ca. 1410) and the poems of Oswald von Wolkenstein and Johannes von Tepl. The Baroque period (1600 to 1720) was one of the most fertile times in German literature. Modern literature in German begins with the authors of the Enlightenment (such as Herder). The Sensibility movement of the 1750s-1770's ended with Goethe's best-selling Die Leiden des jungen Werther (1774). The Sturm und Drang and Weimar Classicism movements were led by Johann Wolfgang von Goethe and Johann Christoph Friedrich von Schiller. German Romanticism was the dominant movement of the late 18th and early 19th centuries.

Biedermeier refers to the literature, music, the visual arts and interior design in the period between the years 1815 (Vienna Congress), the end of the Napoleonic Wars, and 1848, the year of the European revolutions. Under the Nazi regime, some authors went into exile (Exilliteratur) and others submitted to censorship ("internal emigration", Innere Emigration). The Nobel Prize in Literature has been awarded to German language authors thirteen times (as of 2009), or the third most often after English and French language authors (with 27 and 14 laureates, respectively), with some of the winners including Thomas Mann, Hermann Hesse, and Günter Grass.

Graph of works listed in Frenzel, Daten deutscher Dichtung (1953). Visible is medieval literature overlapping with Renaissance up to the 1540s, modern literature beginning 1720, and baroque-era works (1570 to 1730) in between; there is a 20-year gap, 1545-1565, separating the Renaissance from the Baroque era.The Diagram was first published in Olaf Simons, Marteaus Europa, oder Der Roman, bevor er Literatur wurde (Amsterdam/ Atlanta: Rodopi, 2001), p. 12. It does not give a picture of the actual production of German literature, but the selection and classification of literary works by Herbert Alfred and Elizabeth Frenzel.[1]

Medieval German literature refers to literature written in Germany, stretching from the Carolingian dynasty; various dates have been given for the end of the German literary Middle Ages, the Reformation (1517) being the last possible cut-off point.

The Old High German period is reckoned to run until about the mid-11th century, though the boundary to Early Middle High German (second half of the 11th century) is not clear-cut.

The most famous work in OHG is the Hildebrandslied, a short piece of Germanic alliterative heroic verse which besides the Muspilli is the sole survivor of what must have been a vast oral tradition. Another important work, in the northern dialect of Old Saxon, is a life of Christ in the style of a heroic epic known as the Heliand.

Middle High German proper runs from the beginning of the 12th century, and in the second half of the 12th century, there was a sudden intensification of activity, leading to a 60-year "golden age" of medieval German literature referred to as the mittelhochdeutsche Blütezeit (1170–1230). This was the period of the blossoming of MHG lyric poetry, particularly Minnesang (the German variety of the originally French tradition of courtly love). One of the most important of these poets was Walther von der Vogelweide. The same sixty years saw the composition of the most important courtly romances. These are written in rhyming couplets, and again draw on French models such as Chrétien de Troyes, many of them relating Arthurian material, for example, Parzival by Wolfram von Eschenbach. The third literary movement of these years was a new revamping of the heroic tradition, in which the ancient Germanic oral tradition can still be discerned, but tamed and Christianized and adapted for the court. These high medieval heroic epics are written in rhymed strophes, not the alliterative verse of Germanic prehistory (for example, the Nibelungenlied).

The Middle High German period is conventionally taken to end in 1350, while the Early New High German is taken to begin with the German Renaissance, after the invention of movable type in the mid-15th century. Therefore, the literature of the late 14th and the early 15th century falls, as it were, in the cracks between Middle and New High German, and can be classified as either. Works of this transitional period include The Ring (c. 1410), the poems of Oswald von Wolkenstein and Johannes von Tepl, the German versions of Pontus and Sidonia, and arguably the works of Hans Folz and Sebastian Brant (Ship of Fools, 1494), among others. The Volksbuch (chapbook) tradition which would flourish in the 16th century also finds its origin in the second half of the 15th century.

The Baroque period (1600 to 1720) was one of the most fertile times in German literature. Many writers reflected the horrible experiences of the Thirty Years' War, in poetry and prose. Grimmelshausen's adventures of the young and naïve Simplicissimus, in the eponymous book Simplicius Simplicissimus, became the most famous novel of the Baroque period. Martin Opitz established rules for the "purity" of language, style, verse and rhyme. Andreas Gryphius and Daniel Caspar von Lohenstein wrote German language tragedies, or Trauerspiele, often on Classical themes and frequently quite violent. Erotic, religious and occasional poetry appeared in both German and Latin. Sibylle Ursula von Braunschweig-Lüneburg wrote part of a novel, Die Durchlauchtige Syrerin Aramena (Aramena, the noble Syrian lady), which when complete would be the most famous courtly novel in German Baroque literature; it was finished by her brother Anton Ulrich and edited by Sigmund von Birken.[2][3]

Sturm und Drang (the conventional translation is "Storm and Stress"; a more literal translation, however, might be storm and urge, storm and longing, or storm and impulse) is the name of a movement in German literature and music taking place from the late 1760s through the early 1780s in which individual subjectivity and, in particular, extremes of emotion were given free expression in response to the confines of rationalism imposed by the Enlightenment and associated aesthetic movements. The philosopher Johann Georg Hamann is considered to be the ideologue of Sturm und Drang, and Johann Wolfgang von Goethe was a notable proponent of the movement, though he and Friedrich Schiller ended their period of association with it, initiating what would become Weimar Classicism.

Weimar Classicism (German “Weimarer Klassik” and “Weimarer Klassizismus”) is a cultural and literary movement of Europe, and its central ideas were originally propounded by Johann Wolfgang von Goethe and Johann Christoph Friedrich von Schiller during the period 1786 to 1805.

German Romanticism was the dominant movement of the late 18th and early 19th centuries. German Romanticism developed relatively late compared to its English counterpart, coinciding in its early years with the movement known as German Classicism or Weimar Classicism, which it opposed. In contrast to the seriousness of English Romanticism, the German variety is notable for valuing humor and wit as well as beauty. The early German romantics tried to create a new synthesis of art, philosophy, and science, looking to the Middle Ages as a simpler, more integrated period. As time went on, however, they became increasingly aware of the tenuousness of the unity they were seeking. Later German Romanticism emphasized the tension between the everyday world and the seemingly irrational and supernatural projections of creative genius. Heinrich Heine in particular criticized the tendency of the early romantics to look to the medieval past for a model of unity in art and society.

Biedermeier refers to work in the fields of literature, music, the visual arts and interior design in the period between the years 1815 (Vienna Congress), the end of the Napoleonic Wars, and 1848, the year of the European revolutions and contrasts with the Romantic era which preceded it. Typical Biedermeier poets are Annette von Droste-Hülshoff, Adelbert von Chamisso, Eduard Mörike, and Wilhelm Müller, the last three named having well-known musical settings by Robert Schumann, Hugo Wolf and Franz Schubert respectively.

Young Germany (Junges Deutschland) was a loose group of Vormärz writers which existed from about 1830 to 1850. It was essentially a youth movement (similar to those that had swept France and Ireland and originated in Italy). Its main proponents were Karl Gutzkow, Heinrich Laube, Theodor Mundt and Ludolf Wienbarg; Heinrich Heine, Ludwig Börne and Georg Büchner were also considered part of the movement. The wider circle included Willibald Alexis, Adolf Glassbrenner and Gustav Kühne.

Under the Nazi regime, some authors went into exile (Exilliteratur) and others submitted to censorship ("inner emigration", Innere Emigration)

Much of contemporary poetry in the German language is published in literary magazines. DAS GEDICHT, for instance, has featured German poetry from Germany, Austria, Switzerland, and Luxemburg for the last twenty years.

The Nobel Prize in Literature has been awarded to German language authors thirteen times (as of 2009), or the third most often after English and French language authors (with 27 and 14 laureates, respectively).