He was appointed by President Harry S. Truman as an Assistant Secretary of State, heading up the Point Four Program.[1]

Henry Garland Bennett was born in New Hope, Arkansas on December 14, 1886 to Reverend Thomas Jefferson Bennett and Mary Elizabeth (née Bright) Bennett.[2] He had three sisters[3] Although his family moved to Texas before he was one year old he returned to Arkadelphia, Arkansas before school age.[3]

Bennett attended Ouachita Baptist College and obtained a Bachelor of Arts Degree in 1907. While at college he was president of Philomathean Literary Society, business manager of the campus yearbook, The Bear, and vice-president of the athletic program. To earn extra money he collected laundry, drove a grocery wagon and delivered mail.[3]

Remained superintendent of Hugo schools until accepting presidency of Southeastern Normal School in 1919 as the sixth president.[6] He met Vera Pearl Connell in Durant, Oklahoma. She was the daughter of a lawyer and judge. They married on January 27, 1913 and had five children.[6] 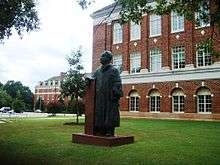 Statue of Henry G. Bennett on the campus of Oklahoma State University

Henry Bennett died in a plane crash in Iran serving on an assignment for the Point Four Program.[1] His wife, Vera, was with him and also was killed in the crash.[6] He was interred at Highland Cemetery, Durant, Oklahoma.[8] The Bennett Memorial Chapel at Oklahoma State University serves as a memorial to Bennett and his wife, and to the students of Oklahoma A&M College who were killed in World War I and World War II.[9]