Here is one hand 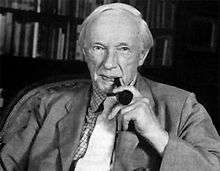 Here is one hand is an epistemological argument created by George Edward Moore in reaction against philosophical skepticism and in support of common sense.

The argument takes the following form:

G. E. Moore wrote A Defence of Common Sense and Proof of an External World. For the purposes of these essays, he posed skeptical hypotheses, such as "you may be dreaming" or "the world is 5 minutes old", and then provided his own response to them. Such hypotheses ostensibly create a situation where it is not possible to know that anything in the world exists. These hypotheses take the following form:

Where S is a subject, sp is a skeptical possibility, such as the brain in a vat hypothesis, and q is a knowledge claim about the world:

Moore does not attack the skeptical premise; instead, he reverses the argument from being in the form of modus ponens to modus tollens. This logical maneuver is often called a G. E. Moore shift or a Moorean shift.[1] His response takes the following form:

Moore famously put the point into dramatic relief with his 1939 essay Proof of an External World, in which he gave a common sense argument against skepticism by raising his right hand and saying "here is one hand," and then raising his left and saying "and here is another". Here, Moore is taking his knowledge claim (q) to be that he has two hands, and without rejecting the skeptic's premise, seeks to prove that we can know the skeptical possibility (sp) to be untrue.

In his 1925 essay A Defence of Common Sense, Moore argues against idealism and skepticism toward the external world on the grounds that skeptics could not give reasons to accept their metaphysical premises that were more plausible to him than the reasons he had to accept the common sense claims about our knowledge of the world that skeptics and idealists must deny. In other words, he is more willing to believe that he has a hand than to believe the premises of what he deems "a strange argument in a university classroom." "I do not think it is rational to be as certain of any one of these ... propositions".[2]

Some subsequent philosophers (especially those inclined to skeptical doubts) have found Moore's method of argument unconvincing.[3]

One form of refutation contends that Moore's attempted proof fails his second criterion for a good proof (i.e. the premises are not demonstrable in the required sense) by pointing out the difference between demonstrating the perception that his hands exist and demonstrating the knowledge that his hands exist. Moore may be doing the former when he means to be doing the latter.[3]

Another form of refutation simply points out that not everyone shares Moore's intuition. If a person finds the skeptical possibility sp more intuitively likely than the knowledge claim q, then for that person Moore's own defense of intuition provides a basis for their skepticism.[3]

Appeals of this type are subsequently often called "Moorean facts".[1] "A Moorean fact [is] one of those things that we know better than we know the premises of any philosophical argument to the contrary".[2]

The "here is one hand" idea deeply influenced Ludwig Wittgenstein, whose last writings were devoted to a new approach to Moore's argument.[4] These remarks were published posthumously as On Certainty.