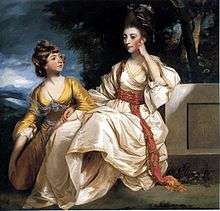 Hester Lynch Thrale (born Hester Lynch Salusbury and became after her second marriage Hester Lynch Piozzi, 27 January 1741 [NS] – 2 May 1821) was a British diarist, author, and patron of the arts. Her diaries and correspondence are an important source of information about Samuel Johnson and 18th-century life.

Thrale was born at Bodvel Hall, Caernarvonshire, Wales. As a member of the powerful Salusbury Family, she belonged to one of the most illustrious Welsh land-owning dynasties of the Georgian era. She was a direct descendant of Katheryn of Berain. Her father was John Salusbury. 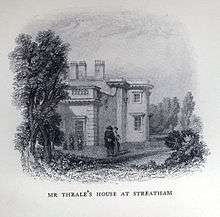 After her father had gone bankrupt in an attempt to invest in Halifax, Canada, she married the rich brewer Henry Thrale on 11 October 1763, at St. Anne's Chapel, Soho, London. They had 12 children and lived at Streatham Park. However, the marriage was often strained; her husband was often slighted by members of the Court and may well have married to improve his social status. The Thrales' eldest daughter, Hester, became a viscountess.

After her marriage, Mrs Thrale was liberated and free to associate with whom she pleased. Due to her husband's financial status, she was able to enter London society, as a result of which she met Samuel Johnson, James Boswell, Bishop Thomas Percy, Oliver Goldsmith and other literary figures, including the young Fanny Burney, whom she took with her to Gay Street, Bath. (There is some evidence that she was jealous of the attention given to the youthful novelist.) 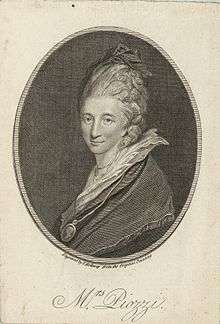 In July 1774 Johnson visited Wales in Thrale's company,[1] during which time they visited Hester's uncle Sir Lynch Cotton at Combermere in Denbighshire.[2] Frances, the wife of Sir Lynch's son Robert "found Johnson, despite his rudeness, at times delightful, having a manner peculiar to himself in relating anecdotes that could not fail to attract old and young. Her impression was that Mrs. Thrale was very vexatious in wishing to engross all his attention, which annoyed him much".[3]

Johnson wrote two verses for her in 1775, the first in celebration of her 35th birthday, and another in Latin to honour her.

Following her husband's death (4 April 1781), she fell in love with and, on 25 July 1784, married Gabriel Mario Piozzi, an Italian music teacher. She complained: "I see the English newspapers are full of gross Insolence towards me," with one commenting how Thrale could not have imagined "his wife's disgrace, by eventually raising an obscure and penniless Fiddler into sudden Wealth."[4] This caused a rift with Johnson, which was only perfunctorily mended shortly before his death. The levelling marriage also earned her the disapproval of Fanny Burney (who would in 1793 marry the impoverished, Catholic émigré Alexandre D'Arblay) and her cousins the Cottons. With her second husband, Hester retired to Brynbella, a specially-built country house on her Bach y Graig estate in the Vale of Clwyd, near Tremeirchion village in north Wales. During this time she began to reflect heavily on her ancestry, and for a time became obsessed with the idea of reclaiming her father's Canadian lands in Herring Cove, an enclave of Nova Scotia.

After Johnson's death, she published Anecdotes of the late Samuel Johnson (1786) and her letters (1788). Together with her diaries which were known as Thraliana, and were not published until 1949, these sources help to fill out the often biased picture of Johnson presented in Boswell's Life. Johnson often stayed with the Thrale household and had his own room, above the library at Streatham in which he worked. Hester's papers provide more insight into his composition process.

Her Retrospection: or a review of the most striking and important events, characters, situations, and their consequences which the last eighteen hundred years have presented to the view of mankind[5] was an attempt at a popular history of that period, but it was not received well by critics, some of whom patently resented female intrusion into the male preserve of history. Posterity has been kinder. According to the Oxford Dictionary of National Biography, "it has since been seen as a feminist history, concerned to show changes in manners and mores in so far as they affected women; it has also been judged to anticipate Marxian history in its keen apprehension of reification: 'machines imitated mortals to unhoped perfection, and men found out they were themselves machines'."[6]

Hester Piozzi died at number 10 Sion Row, Clifton, Bristol, of complications after a fall, and was buried on 16 May 1821 near Brynbella in the churchyard of Corpus Christi Church, Tremeirchion, next to Piozzi.[7] A marble inside the church was erected in 1909 inscribed with the words

Near this place are interred the remains of

Hester Lynch Piozzi. "Doctor Johnson's Mrs Thrale" Born 1741. Died 1821. Witty. Vivacious and Charming. In an Age of Genius She Ever Held a Foremost Place This Tablet is Erected by Orlando Butler Fellowes Grand-Son of Sir James Fellowes. The Intimate Friend of Mrs. Piozzi and her Executor. Assisted by Subscriptions

Fanny Burney eulogized her, going so far as to make a comparison with Germaine de Staël.[9]

From the time of her death to nearly the present, she was referred to by scholars as Johnson had referred to her as "Mrs Thrale" or "Hester Thrale." However, she is now often referred to as either "Hester Lynch Piozzi" or "Mrs Piozzi."

Samuel Beckett would draw on Thrale's diaries and Anecdotes to dramatize her and Samuel Johnson's relationship in one of his earliest plays, Human Wishes. The play was abandoned after the completion of the First Act.