In geometry, a hippopede (from Ancient Greek ἱπποπέδη, "horse fetter") is a plane curve determined by an equation of the form

where it is assumed that c>0 and c>d since the remaining cases either reduce to a single point or can be put into the given form with a rotation. Hippopedes are bicircular rational algebraic curves of degree 4 and symmetric with respect to both the x and y axes.

When d>0 the curve has an oval form and is often known as an oval of Booth, and when d<0 the curve resembles a sideways figure eight, or lemniscate, and is often known as a lemniscate of Booth, after 19th-century mathematician James Booth who studied them. Hippopedes were also investigated by Proclus (for whom they are sometimes called Hippopedes of Proclus) and Eudoxus. For d = −c, the hippopede corresponds to the lemniscate of Bernoulli. 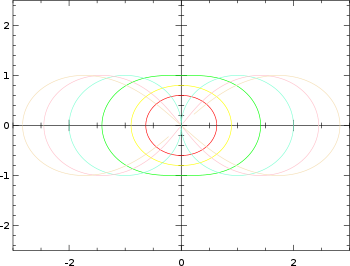 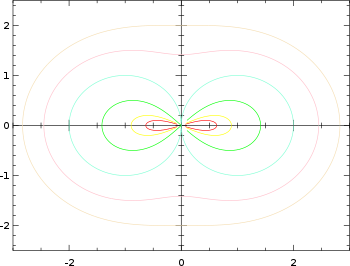 Hippopedes can be defined as the curve formed by the intersection of a torus and a plane, where the plane is parallel to the axis of the torus and tangent to it on the interior circle. Thus it is a spiric section which in turn is a type of toric section.

If a circle with radius a is rotated about an axis at distance b from its center, then the equation of the resulting hippopede in polar coordinates

or in Cartesian coordinates

Note that when a>b the torus intersects itself, so it does not resemble the usual picture of a torus.