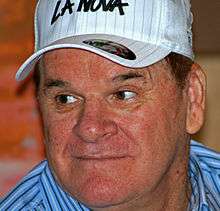 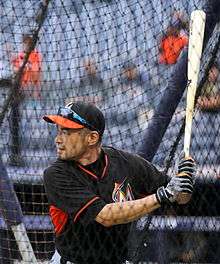 In baseball statistics, a hit (denoted by H), also called a base hit, is credited to a batter when the batter safely reaches first base after hitting the ball into fair territory, without the benefit of an error or a fielder's choice.

To achieve a hit, the batter must reach first base before any fielder can either tag him with the ball, throw to another player protecting the base before the batter reaches it, or tag first base while carrying the ball. The hit is scored the moment the batter reaches first base safely; if he is put out while attempting to stretch his hit to a double or triple or home run on the same play, he still gets credit for a hit (according to the last base he reached safely on the play).

A hit for one base is called a single, for two bases a double, and for three bases a triple. A home run is also scored as a hit. Doubles, triples, and home runs are also called extra base hits.

An "infield hit" is a hit where the ball does not leave the infield. Infield hits are uncommon by nature, and most often earned by speedy runners.

A no-hitter is a game in which one of the teams prevented the other from getting a hit. Throwing a no-hitter is rare and considered an extraordinary accomplishment for a pitcher or pitching staff. In most cases in the professional game, no-hitters are accomplished by a single pitcher who throws a complete game. A pitcher who throws a no-hitter could still allow runners to reach base safely, by way of walks, errors, hit batsmen, or batter reaching base due to interference or obstruction. If the pitcher allows no runners to reach base, the no-hitter is a perfect game. 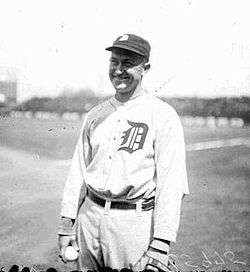 In 1887, Major League Baseball counted bases on balls (walks) as hits. The result was skyrocketing batting averages, including some near .500; Tip O'Neill of the St. Louis Browns batted .485 that season, which would still be a major league record if recognized. The experiment was abandoned the following season.

There is controversy regarding how the records of 1887 should be interpreted. The number of legitimate walks and at-bats are known for all players that year, so computing averages using the same method as in other years is straightforward. In 1968, Major League Baseball formed a Special Baseball Records Committee to resolve this (and other) issues. The Committee ruled that walks in 1887 should not be counted as hits. In 2000, Major League Baseball reversed its decision, ruling that the statistics which were recognized in each year's official records should stand, even in cases where they were later proven incorrect. Most current sources list O'Neill's 1887 average as .435, as calculated by omitting his walks. He would retain his American Association batting championship. However, the variance between methods results in differing recognition for the 1887 National League batting champion. Cap Anson would be recognized, with his .421 average, if walks are included, but Sam Thompson would be the champion at .372 if they are not.

The official rulebook of Major League Baseball states in Rule 10.05:[1]

(a) The official scorer shall credit a batter with a base hit when:

(1) the batter reaches first base (or any succeeding base) safely on a fair ball that settles on the ground, that touches a fence before being touched by a fielder or that clears a fence;
(2) the batter reaches first base safely on a fair ball hit with such force, or so slowly, that any fielder attempting to make a play with the ball has no opportunity to do so;

Rule 10.05(a)(2) Comment: The official scorer shall credit a hit if the fielder attempting to handle the ball cannot make a play, even if such fielder deflects the ball from or cuts off another fielder who could have put out a runner.

(b) The official scorer shall not credit a base hit when a:

Rule 10.05(b) Comment: Rule 10.05(b) shall not apply if the fielder merely looks toward or feints toward another base before attempting to make the putout at first base.

(5) runner is called out for interference with a fielder attempting to field a batted ball, unless in the scorer's judgment the batter-runner would have been safe had the interference not occurred.