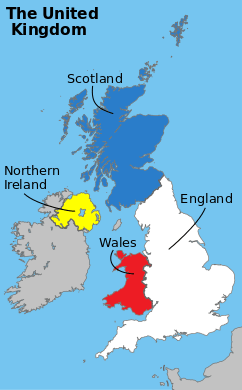 A map of the Home Nations of the UK White: England; Yellow: Northern Ireland; Blue: Scotland; and Red: Wales

The Home Nations, or Home Countries, refers collectively to England, Scotland, Wales, and Northern Ireland (countries of the United Kingdom), and in certain sports (e.g. Rugby football) contexts, to England, Scotland, Wales and the whole island of Ireland. The term "Home Nations" is used in this second sense partly because Northern Ireland and the Republic of Ireland have a unified association structure in certain sports, such as the Irish Rugby Football Union. Formerly the phrase was applied in general in this same wider sense, such as the period between 1800 and 1922, before the political partition of Ireland, when the whole island was part of the United Kingdom. The term "Home Countries" (not to be confused with the "home counties") is also sometimes used, and is synonymous.[1]

The term has yet a third meaning in the context of British Cycling, where it refers collectively to the seven teams representing the four constituent countries of United Kingdom plus the three Crown Dependencies (the Isle of Man, Jersey and Guernsey) that participate in the Commonwealth Games.[1] The Crown Dependencies are not part of the United Kingdom, but are politically associated with it, and together make up the British Islands.[2]

In association football, the Home Nations originally referred to the then four national teams of the United Kingdom: England, Ireland, Scotland and Wales.[3] Today, the term refers to the teams of England, Northern Ireland, Scotland and Wales – the teams that contested the British Home Championship until 1984[4] – although references to the Home Nations sometimes include the Republic of Ireland team.[5]

A debate took place among the football associations that govern the sport in England, Scotland, Wales and Northern Ireland, over whether they would allow their members to participate in the 2012 Summer Olympics as a single UK team. The English Football Association (the only association in favour of participation), and the news media used the term Home Nations to describe the parties to the debate.[6][7] In the event, a team consisting only of English and Welsh players took part (with the Football Association of Wales still opposed, but not placing sanctions on those Welsh players who chose to play).[8]

In 1883, the first Home Nations Championship was played between England, Ireland, Scotland and Wales. At this point in its history, the competition contained only teams from the UK. In 1910, France officially joined the competition and it was renamed the Five Nations Championship. Despite the partition of Ireland and the secession of the Republic of Ireland from the United Kingdom, the island of Ireland still fields a single sports team and is referred to as a Home Nation in the context of rugby union.[9] When France was expelled from the international championship in 1932, the tournament reverted to being known simply as the Home Nations tournament until the readmission of France immediately after the 1939 tournament, just before World War II caused its suspension until 1947. Since the admission of Italy in 2000, the tournament has been known by its current name, the Six Nations Championship.

Victory by any Home Nation over the other three Home Nations is a Triple Crown.[10] The Home Nations also contribute players to a unified team known as the British and Irish Lions. Southern Hemisphere teams who beat all four home nations in one tour are said to have a Grand Slam Tour.[11]

The Amateur Four Nations competition in rugby league, run annually from 2002 to 2007 for the A sides of Wales, England, Scotland and Ireland, was also referred to as the "home nations championship".