Since Ireland began competing in international rugby league in 1995, it has participated in the 1995 Rugby League Emerging Nations Tournament, the 1996 Super League World Nines, and three Rugby League World Cups – 2000, 2008 and 2013. They have also competed in the Rugby League European Nations Cup and Victory Cup. Ireland A compete in the St Patrick's Day Challenge in the USA and in the Amateur Four Nations.

Irish players have in the past been selected to play for the Great Britain side, one recent example being Cork-born Brian Carney. However, since the Great Britain team was split into individual nations in 2007, it is unlikely that this situation will arise again.

The seeds of modern-day Rugby League in Ireland were sown in 1989 when Brian Corrigan founded the Dublin Blues, a club that was primarily used by union players to keep fit during the summer by playing matches against touring British teams. In 1995 the British RFL established Ireland's first development officer and later that year Ireland played against the United States in Washington on St Patricks Day with Ireland winning 24-22. Wigan Warriors player Joe Lydon came on as a substitute despite him being there as manager. Huddersfield Giants coach Terry Flanagan and former Great Britain international Niel Wood were the joint coaches. In August 1996 Ireland beat Scotland at the RDS Arena in Dublin as a curtain raiser to the charity shield match between Leeds Rhinos and Wigan Warriors . Former Great Britain player Des Foy played for Ireland. Following their appearance at the 1995 Emerging Nations Tournament they were invited to the Super League World Nines in Fiji where they finished 8th. Prior to the tournament Ireland played a game of touch rugby against Australia in Fiji's National Stadium on 20 February going down 12-20. Later that year Ireland returned to the USA to play in the St Patrick's Day match winning 14-12[1]

The Four Provinces Flag of Ireland

The Irish rugby league team is one of many Irish teams that draws its players from across the island of Ireland, it utilises the Four Provinces Flag of Ireland and the anthem "Ireland's Call".

Ireland were included in the tournament held in England and were placed in Group 2 alongside Moldova and Morocco. Ireland beat Moldova 48-24 before beating Morocco 42-6 to progress to the final. Gigg Lane in Bury was the venue for the final against Cook Islands but Ireland lost 6-22. Coached by Terry Flanagan, Ireland's squad included professionals Des Foy and Martin Crompton in an otherwise domestic based squad

1997 saw more England-based Super League players making themselves available by use of the grandparent rule. The Irish team improved its standards but this development gave less opportunity for Irish-based players to get a chance to play. However, Irish-based players were included in the Irish squad for the triangular tournaments in 1998 against France and Scotland and 1999 against Scotland and Wales. Their success was enough to earn a place in the 2000 World Cup. Finishing top of their group, the Irish eventually lost 26–16 to England in the quarter-finals, but the performance set the scene for future developments in Ireland.

Ireland were drawn against Lebanon and Russia in Europe's 2008 Rugby League World Cup Qualifying Pool Two. Ireland topped the group with a 16–16 draw with Lebanon at Dewsbury on 2 November 2007. The draw meant Ireland qualified for the 2008 World Cup on points difference from Lebanon as both nations gained the same number of group points.

At the 2008 World Cup in Australia, Ireland were in Group C along with Tonga and Samoa. They lost to Tonga on 27 October in Parramatta, Sydney, but were victorious against Samoa, again in Parramatta, on 5 November and topped the group on points difference. As the group winners, they played Fiji, winners of Group B, for a chance to qualify for the semi-final. Fiji won 30–14 and so Ireland were eliminated.

Mark Aston the head coach and driving force behind the Sheffield Eagles as been confirmed as the head coach of Rugby League Ireland. His appointment was announced at a press conference in Sheffield on Tuesday 24 May 2011 and he is confirmed in the role for the World Cup in 2013.

The following tournaments is a list of notable international competitions that Ireland has been competing in since their existence in 1995. A red box around the year indicates tournaments played within Ireland

The Ireland national team squad selected for the 2017 World Cup qualifiers.[2] (caps and points apply for before the qualifiers began):

Ireland has played in 54 internationals since its debut in 1995 winning 23 and losing 28 with 3 draws. Ireland have played 18 different teams over this 21-year period. As it is not a full member of the Rugby League International Federation, these matches are not considered to be tests. They compete in the Rugby League European Nations Cup and the Rugby League World Cup 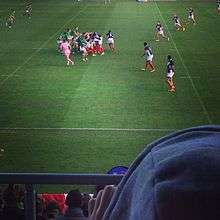 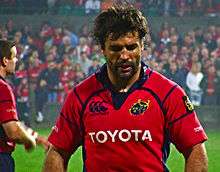 The Ireland A team is selected from players in the Irish domestic competition. This team is administered by Rugby League Ireland. The 'A' team competes each year in the Amateur Four Nations with England A, Scotland A and Wales A.