The Honolulu Marathon (branded JAL Honolulu Marathon for sponsorship reasons) is a major 26.2-mile (42.2 km) marathon in Honolulu, Hawaii. It is one of the world's largest marathons,[2] taking place annually on the second Sunday in December.[3] The marathon is popular for its exotic location in Hawaii, and is also popular among first-time marathoners, many of whom are visitors from Japan. In addition to title sponsor Japan Airlines, the marathon is also sponsored (as of 2012) by Adidas, MUFG Financial Group, NTT Docomo, and Sato Pharmaceuticals USA.

The 2012 Honolulu Marathon was held on Sunday, December 9, 2012. The field for the 40th Honolulu Marathon reached 30,898 entries at the marathon expo at the Hawaii Convention Center. 16,067 of those registered entrants were from Japan. The 2012 marathon was the largest in 15 years, and the second largest in America of 2012, only surpassed by the Chicago Marathon.[4] 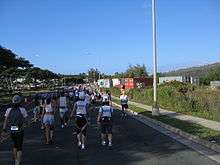 The race began in 1973. During its formative period (1973–1978) the Honolulu Marathon doubled in size every year—a rate that has been equaled only once.[5] That growth, like the growth of long-distance running itself, came about not from an interest in competition, but from a quest for personal longevity and an enhanced quality of life.[6] Former Honolulu Mayor Frank Fasi has been inducted in the Honolulu Marathon Hall of Fame after documents proved that he was the true founder of the race 40 years ago.

Mayor Fasi died in 2010. With the Honolulu Marathon just days away, race officials say they have undisputed proof that Fasi made it all happen.

"We were clearing out some files and we saw a box labeled 1973 and we saw the documents that showed beyond a shadow of a doubt that Mayor Fasi was the creator and the founder of the marathon," said Jim Barahal, Honolulu Marathon President.

Now drawing more than 20,000 entries a year, the Honolulu Marathon is one of the biggest in the country. Back in 1973, there wasn't widespread interest in it. But Mayor Fasi knew about the Boston Marathon, and saw its potential here. At the forefront of the growth of the Honolulu Marathon was cardiologist Jack Scaff, one of the first physicians to prescribe running as therapy for heart disease. In 1977 Sports Illustrated's senior writer and Olympic marathoner Kenny Moore wrote a feature story about the race. That article was soon followed by the book "The Honolulu Marathon," by journalist Mark Hazard Osmun; the book was a revelatory chronicle of the then-unfolding social craze called the "Running Boom," as exemplified in the Honolulu event.

Over time, the race grew and changed, luring large corporate sponsors and paying substantial prize money to the winners. In 1995, the Honolulu Marathon enjoyed the distinction of being the world's largest marathon when it drew 34,434 entrants and had 27,022 finishers.[7]

Unique to the Honolulu Marathon among American marathons is its popularity among runners from Japan, where there are very few marathons open to all entrants. In recent years, the majority of entrants have been visitors from Japan. The marathon is popular enough that the Honolulu Marathon Association maintains an office in Tokyo to process entries. Japan Air Lines has been the title sponsor of the race since 1985.

Starting near Ala Moana Beach Park across from Ala Moana Center, the course progresses west along the waterfront toward downtown Honolulu, then loops through downtown and bends back east through Waikiki, around Diamond Head, and out toward the eastern suburbs of Honolulu, winding through Hawaii Kai before doubling back toward the finish line at Waikiki's Kapiolani Park. Marathoners consider the course moderately difficult because of the tropical weather conditions, with temperatures starting at around 65 °F (18 °C) and rising to as high as 80 °F (27 °C), and a relatively hilly course compared with other marathons. Nevertheless, the race also remains a popular choice for first-time marathoners.[6]

Satellite races in Iraq and Afghanistan

The Honolulu Marathon has been popular with U.S. military personnel stationed in Hawaii. With many Hawaii-based troops deployed abroad, the marathon coordinated with the military to organize satellite marathon races on U.S. bases in Iraq and Afghanistan on the same day as the main race, with finishers receiving the same T-shirts and medals. The first such race was held in 2004 at a U.S. base in Tarin Kowt, Afghanistan. In 2005, the marathon organized a similar race at Camp Victory in Baghdad.[9]

On Dec. 12, 2010, the 43rd Sustainment Brigade, home stationed in Fort Carson, Colo., now deployed to Kandahar Air Field, Afghanistan, organized a satellite run on the base. Nearly 135 people from several different nations participated in the run.

In recent years, on average, about 25,000 runners finish the Honolulu Marathon each year, and it has consistently placed among the world's ten largest marathons in terms of total finishers. Entry to the Honolulu Marathon is open to anyone who can pay the entry fee. Unlike other marathons of similar size, popularity, and stature, there are no qualifying standards to meet, no fixed limits on the number of runners, and no time limit to finish the course (all runners receive an official time and certificate).

Although the difficulty of the course precludes world-record pace performances, winners of the Honolulu Marathon have used it as a stepping stone to greater achievements. For instance, three-time winner Ibrahim Hussein of Kenya later won the Boston Marathon three times; and 1993 winner Bong-Ju Lee won the silver medal in the 1996 Olympic Marathon in Atlanta.

Ethiopian Ambesse Tolossa was disqualified as the men's champion because the U.S. Anti-Doping Agency found he had a banned substance in his system.[11]

In 2007 the Marathon organizers switched from the ChampionChip timing system they had used since 2000 to a new system from SAI which utilized a smaller, lighter, chip implanted in a strip of paper. For a myriad of reasons that are not yet entirely clear (heavy rains, improper usage, failed generators) the timing devices apparently failed to accurately record the start, split and finish times of all 24,300 participants, forcing race officials to manually review finish line video tape of all 24,000+ runners in order to confirm their correct finishing times.[12]