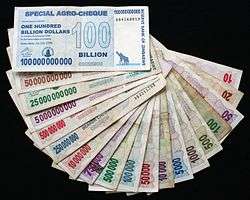 Zimbabwe banknotes ranging from 10 dollars to 100 billion dollars printed within a one-year period. The magnitude of the currency scalars signifies the extent of the hyperinflation.

Hyperinflation in Zimbabwe was a period of currency instability that began in the late 1990s shortly after the confiscation of private farms from landowners, towards the end of Zimbabwean involvement in the Second Congo War. During the height of inflation from 2008 to 2009, it was difficult to measure Zimbabwe's hyperinflation because the government of Zimbabwe stopped filing official inflation statistics. However, Zimbabwe's peak month of inflation is estimated at 79.6 billion percent in mid-November 2008.[1]

In 2009, Zimbabwe stopped printing its currency, with currencies from other countries being used.[2] In mid-2015, Zimbabwe announced plans to have completely switched to the United States dollar by the end of 2015.[3]

On 18 April 1980, the Republic of Zimbabwe was born from the former British colony of Southern Rhodesia. The Rhodesian Dollar was replaced by the Zimbabwe dollar at par value. When Zimbabwe gained independence, the Zimbabwean dollar was more valuable than the US dollar at the official exchange rates, however, this value did not reflect reality, and its black market value was lower.[4] In its early years, Zimbabwe experienced strong growth and development. Wheat production for non-drought years was proportionally higher than in the past. The tobacco industry was thriving as well. Economic indicators for the country were strong.

From 1991 to 1996, the Zimbabwean Zanu-PF government of president Robert Mugabe embarked on an Economic Structural Adjustment Programme (ESAP), designed by the IMF and the World Bank, that had serious negative effects on Zimbabwe's economy. In the late 1990s, the government instituted land reforms intended to evict white landowners and place their holdings in the hands of black farmers. However, many of these "farmers" had no experience or training in farming. From 1999 to 2009, the country experienced a sharp drop in food production and in all other sectors. The banking sector also collapsed, with farmers unable to obtain loans for capital development. Food output capacity fell 45%, manufacturing output 29% in 2005, 26% in 2006 and 28% in 2007, and unemployment rose to 80%.[5] Life expectancy dropped.[6]

The Reserve Bank of Zimbabwe blamed the hyperinflation on economic sanctions imposed by the United States of America, the IMF and the European Union.[7][8] These sanctions affect the government of Zimbabwe,[9] and asset freezes and visa denials targeted at 200 specific Zimbabweans closely tied to the Mugabe regime.[10] There are also restrictions placed on trade with Zimbabwe, by both individual businesses and the US Treasury Department's Office of Foreign Asset Control.[11]

Crucial to both components is discipline over the creation of additional money. However, the Mugabe government was printing money to finance involvement in the Democratic Republic of the Congo and, in 2000, in the Second Congo War, including higher salaries for army and government officials. Zimbabwe was under-reporting its war spending to the International Monetary Fund by perhaps $23 million a month.[13]

Another motive for excessive money creation has been self-dealing. Transparency International ranks Zimbabwe's government 157th of 177[14] in terms of institutionalised corruption.[15] The resulting lack of confidence in government undermines confidence in the future and faith in the currency.

Economic mis-steps by government can create shortages and occupy people with workarounds rather than productivity. Though this harms the economy, it does not necessarily undermine the value of the currency, but may harm confidence in the future. Widespread poverty and violence, including government violence to stifle political opposition, also undermines confidence in the future.[16] Land reform lowered agricultural output, especially in tobacco, which accounted for one-third of Zimbabwe's foreign-exchange earnings. Manufacturing and mining also declined. An objective reason was, again, that farms were put in the hands of inexperienced people; and subjectively, that the move undermined the security of property.

Government instability and civic unrest were evident in other areas.[17] Zimbabwean troops, trained by North Korean soldiers, conducted a massacre in the 1980s in the southern provinces of Matabeleland and Midlands, though Mugabe's government cites guerrilla attacks on civilian and state targets. Conflicts between the Ndebele ethnic minority and Mugabe's majority Shona people have led to many clashes,[18] and there is also unrest between blacks and whites, in which the land reform was a factor. An aspect of this reform that seeks to bar whites from business ownership induced many to leave the country.[19]

Lack of confidence in government to practiсe fiscal restraint feeds on itself. In Zimbabwe, neither the issuance of banknotes of higher denominations nor proclamation of new currency regimes led holders of the currency to expect that the new money would be more stable than the old. Remedies announced by the government never included a believable basis for monetary stability.[20][21] Thus, one reason the currency continued to lose value, causing hyperinflation, is that so many people expected it to.[22]

Over the course of the five-year span of hyperinflation, the inflation rate fluctuated greatly. At one point, the US Ambassador to Zimbabwe predicted that it would reach 1.5 million percent. In June 2008 the annual rate of price growth was 11.2 million percent. The worst of the inflation occurred in 2008, leading to the abandonment of the currency. The peak month of hyperinflation occurred in mid-November 2008 with a rate estimated at 79,600,000,000% per month.[1] This resulted in US$1 becoming equivalent to the staggering sum of Z$2,621,984,228.[23][24]

As hyperinflation accelerated, the value of the Zimbabwe dollar declined fast against other currencies, yet official exchange rates published by the Reserve Bank of Zimbabwe were infrequently updated; this made it impossible to tell from an official source how much the Zimbabwe dollar was really worth against other currencies on a particular day, which in turn disrupted international business transactions involving Zimbabwe dollars. Staff from WM/Reuters devised an indirect means of measurement that was termed the Old Mutual Implied Rate (OMIR).[25] This took the daily price of shares in the insurance company Old Mutual that traded in the London and Harare stockmarkets and derived from it a notional daily exchange rate between the Zimbabwe dollar and the pound.[26][27] Shares had much less strict capital controls than through the Zimbabwe banking system, so the shares were used as a vehicle for moving capital between currencies by buying stock in either London or Harare and then selling in the other location.

The Old Mutual Implied rate was widely adopted benchmark rate for unofficial currency exchange until intervention by the Reserve Bank of Zimbabwe in May 2008 to prohibit the transfer of shares in Old Mutual, ABC and Kingdom Meikles Africa out of the country, therefore stopping their fungibility.

Use of foreign currencies

In 2007, the government declared inflation illegal. Anyone who raised the prices for goods and services was subject to arrest. This amounted to a price freeze, which is usually ineffective in halting inflation.[28] Officials arrested numerous corporate executives for changing their prices.[29]

In December 2008, the Central Bank of Zimbabwe licensed around 1,000 shops to deal in foreign currency.[30][31] Citizens had increasingly been using foreign currency in daily exchanges, as local shops stated fewer prices in Zimbabwe dollars because they needed foreign currency to import foreign goods. Many businesses and street vendors continued to do so without getting the license.[32]

In January 2009, acting Finance Minister Patrick Chinamasa lifted the restriction to use only Zimbabwean dollars. This too acknowledged what many were already doing. Citizens were allowed to use the US dollar, the euro, and the South African rand. However, teachers and civil servants were still being paid in Zimbabwean dollars. Even though their salaries were in the trillions per month, this amounted to around US$1, or half the daily bus fare.[33] The government also used a restriction on bank withdrawals to try to limit the amount of money that was in circulation. It limited cash withdrawals to $Z500,000 which was around US$0.25.[34] 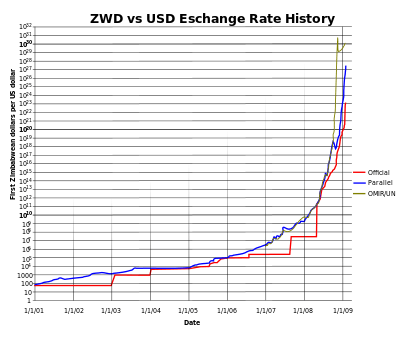 Such business venues constituted a black market, an arena explicitly outside the law. Transactors could evade the price freezes and the mandate to use Zimbabwean dollars.

The black market served the demand for daily goods such as soap and bread, as grocery stores operating within the law no longer sold items whose prices were strictly controlled, or charged customers more if they were paying in Zimbabwean dollars.[36] At one point, a loaf of bread was Z$550 million in the regular market, when bread was even available; apart from a trip to another country, the black market was the only option for almost all goods, and bread might cost Z$10 billion.[37]

The government did not attempt to fight inflation with fiscal and monetary policy. In 2006, before hyperinflation reached its peak, the bank announced it would print larger bills to buy foreign currencies. The Reserve Bank printed a Z$21 trillion bill to pay off debts owed to the International Monetary Fund.

On three occasions, the Central Bank of Zimbabwe redenominated the currency. First, in August 2006, the Central Bank recalled notes in exchange for new notes with three zeros slashed from the currency.[39] In July 2008, the governor of the Reserve Bank of Zimbabwe, Gideon Gono, announced a new Zimbabwean dollar, this time with 10 zeros removed. The Z$10 billion would be redenominated to be Z$1.[40] This move was not just to slow inflation but also to make computations more manageable.[41]

A third redenomination, producing the "fourth Zimbabwe dollar," occurred in February 2009, and dropped 12 more zeros from the currency. It was thus worth 10 trillion trillion original dollars, as the three redenominations together reduced the value of an original dollar by 103 × 1010 × 1012 = 1025. Computers could not handle the amount of zeros such that other forms of money had to be used to act as normal money (bearer’s cheques). Banks had to input a lesser amount on the deposit or withdrawal slip then would put a covering statement, such as “multiply by 1000 000 or add 10 zeros to your amount to get the real value”. The same was true for businesses as well and all traders.

A solution effectively adopted by Zimbabwe is to adopt some foreign currency as official. To facilitate commerce, it is less important which currency is adopted than that the government standardise on a single currency. The US dollar, the euro, and the South African rand were candidates; the US dollar had the most credibility and was the most widely traded within Zimbabwe.[42] Zimbabwe could have joined the nearby nations of Lesotho, Namibia, South Africa, and Swaziland, which constitute the Common Monetary Area, or "Rand Zone"[4] by formally deciding to use the rand to promote trade and stability.[43]

In 2014, the Reserve Bank of Zimbabwe unveiled "convertible" coins in denominations of US$0.01 through US$0.50. The Bank said that 80% of Zimbabweans use the U.S. dollar, and said the local lack of coins induces retailers to round prices up to the next higher dollar. The coins extend the use of the dollar as a de facto currency, and indeed the National Bank has repeatedly assured that it does not intend to bring back a national currency.[44] As of May 2016 the liquidity of the USD had rapidly decreased and John Mangudya, the governor of the Reserve Bank of Zimbabwe, said Zimbabwe would print new bond note which he was said would be at par with the American dollar.[45] This was to be done within the following two months. Some citizens disputed this, saying the 2008 error was now returning and they would not accept the bond notes.

In June 2015, the Reserve Bank of Zimbabwe said it would begin a process to "demonetise" (i.e., to officially value a flat currency at zero). The plan was to have completed the switch to the US dollar by the end of September 2015.[3] In December 2015 Patrick Chinamasa the Zimbabwe Minister of Finance said they would make the Chinese yuan their main reserve currency and legal tender after China cancelled $40 million debts. [46] However this was denied by the Reserve Bank of Zimbabwe in January 2016.[47] In June 2016, nine currencies were legal tender in Zimbabwe but it was estimated 90% of transactions were in US dollars and 5% in Rand.[48]