Money creation (also known as credit creation) is the process by which the money supply of a country or a monetary region (such as the Eurozone) is increased. A central bank may introduce new money into the economy (termed "expansionary monetary policy", or by detractors "printing money") by purchasing financial assets or lending money to financial institutions. However, in most countries today, most of the money supply is in the form of bank deposits, which is created by the fractional reserve banking system. Bank lending multiplies the amount of broad money beyond the amount of base money originally created by the central bank. Reserve requirements, capital adequacy ratios, and other policies of the central bank limit this process.

Money creation by the central bank

Monetary policy regulates a country's money supply, the amount of broad currency in circulation. Almost all modern nations have central banks such as the United States Federal Reserve System, the European Central Bank (ECB), and the People's Bank of China for conducting monetary policy. Charged with the smooth functioning of the money supply and financial markets, these institutions are generally independent of the government executive.

The primary tool of monetary policy is open market operations: the central bank buys and sells financial assets such as treasury bills, government bonds, or foreign currencies from private parties. Purchases of these assets result in currency entering market circulation, while sales of these assets remove currency. Usually, open market operations are designed to target a specific short-term interest rate. For example, the U.S. Federal Reserve may target the federal funds rate, the rate at which member banks lend to one another overnight. In other instances, they might instead target a specific exchange rate relative to some foreign currency, the price of gold, or indices such as the consumer price index.

Other monetary policy tools to expand the money supply include decreasing interest rates by fiat; increasing the monetary base; and decreasing reserve requirements. Some other means are: discount window lending (as lender of last resort); moral suasion (cajoling the behavior of certain market players); and "open mouth operations" (publicly asserting future monetary policy). The conduct and effects of monetary policy and the regulation of the banking system are of central concern to monetary economics.

In modern economies, relatively little of the supply of broad money is in physical currency. For example, in December 2010 in the United States, of the $8.853 trillion in broad money supply (M2), only about 10% (or $915.7 billion) consisted of physical coins and paper money.[2] The manufacturing of new physical money is usually the responsibility of the central bank, or sometimes, the government's treasury.

Quantitative easing (QE) involves the creation of a significant amount of new base money by a central bank by the buying of assets that it usually does not buy. Usually, a central bank will conduct open market operations by buying short-term government bonds or foreign currency. However, during a financial crisis, the central bank may buy other types of financial assets as well. The central bank may buy long-term government bonds, company bonds, asset-backed securities, stocks, or even extend commercial loans. The intent is to stimulate the economy by increasing liquidity and promoting bank lending, even when interest rates cannot be pushed any lower.

But what does it mean for a central bank to "buy" assets? In reality, the central bank is not "buying" anything, in the conventional sense that cash is paid for the asset. What it does is to accept the assets permanently as reserves of the bank that is "selling" the assets to the central bank. Reserves posted at the central bank are in effect the currency used to settle the net day-to-day interbank debts between the client banks of the central bank. Crediting the assets as reserves has two effects: The selling bank now holds larger reserves at the central bank, and therefore can settle more interbank debts. Additionally, and more importantly, the selling bank can now extend a larger quantity of loans to customers, as limited by the allowed size of the fractional reserve ratio. QE can increase risk, because reserves held at a central bank normally should be of the highest quality, e.g. US Government Bonds. When less safe assets are accepted as reserves, one can argue that the soundness of the entire banking system is reduced.

As explained above, Quantitative easing increases reserves in the banking system (i.e., deposits of commercial banks at the central bank), giving depository institutions the ability to make new loans. Quantitative easing is usually used when lowering the discount rate is no longer effective because interest rates are already close to or at zero. In such a case, normal monetary policy cannot further lower interest rates, and the economy is in a liquidity trap.

In principle, central banks can create money de novo in order to finance public spending. Under the influence of Monetarism, this is known somewhat misleadingly as debt monetization, and is forbidden by law in many countries. In the Eurozone for example, article 123 of the Lisbon Treaty explicitly prohibits the European Central Bank from financing public institutions.[4]

In contemporary monetary systems, most money in circulation exists not as cash or coins created by the central bank, but as bank deposits. Commercial bank lending expands the amount of bank deposits.[5] Through fractional reserve banking, the modern banking system expands the money supply of a country beyond the amount initially created by the central bank, creating most of the broad money in the system.[6]

There are two types of money in a fractional-reserve banking system: currency originally issued by the central bank, and bank deposits at commercial banks:[7][8]

When a commercial bank loan is extended, new commercial bank money is created if the loan proceeds are issued in the form of an increase in a customer's demand deposit account (that is, an increase in the bank's demand deposit liability owed to the customer). As a loan is paid back through reductions in the demand deposit liabilities the bank owes to a customer, that commercial bank money disappears from existence. Because loans are continually being issued in a normally functioning economy, the amount of broad money in the economy remains relatively stable. Because of this money creation process by the commercial banks, the money supply of a country is usually a multiple larger than the money issued by the central bank; that multiple was traditionally determined by the reserve requirements and now essentially by other financial ratios (primarily the capital adequacy ratio that limits the overall credit creation of a bank) set by the relevant banking regulators in the jurisdiction.

An early table, featuring reinvestment from one period to the next and a geometric series, is found in the tableau économique of the Physiocrats, which is credited as the "first precise formulation" of such interdependent systems and the origin of multiplier theory.[10] 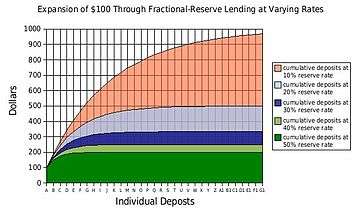 The expansion of $100 through fractional-reserve lending under the re-lending model of money creation, at varying rates. Each curve approaches a limit. This limit is the value that the money multiplier calculates. Note that the top amount resulting in $1000 is not 20% but 10% as 100/0.1=1000.

The most common mechanism used to measure this increase in the money supply is typically called the money multiplier. It calculates the maximum amount of money that an initial deposit can be expanded to with a given reserve ratio – such a factor is called a multiplier. It is the maximum amount of money commercial banks can legally create for a given quantity of reserves.

It is calculated as

In the re-lending model, this is alternatively calculated as a geometric series under repeated lending of a geometrically decreasing quantity of money: reserves lead loans. In endogenous money models, loans lead reserves, and it is not interpreted as a geometric series. In practice, because banks often have access to lines of credit, and the money market, and can use day time loans from central banks, there is often no requirement for a pre-existing deposit for the bank to create a loan and have it paid to another bank.[11][12]

There are also heterodox theories of how money is created. These include: