Not to be confused with L-3 Communications.

On October 31, 2016, CenturyLink announced an agreement to acquire Level 3 Communications in a cash and stock transaction.[6]

In 1985, Peter Kiewit Sons' Inc created a subsidiary named Kiewit Diversified Group to manage the corporation's business that was not related to construction. The division was spun off as a separate entity and changed its name to Level 3 Communications in 1998 to signify an increased focus on communication services. That same year saw it make an IPO on NASDAQ. According to Level3's own history, it continued to build its telecommunications network after going public.[7]

According to Level3's own history, in 2003, the company acquired Genuity, and, between 2005 and 2007, it purchased several other companies including former rivals WilTel Communications, Broadwing Corporation, Looking Glass Networks, Progress Telecom, and Telcove (formerly Adelphia Business Solutions).[7] In 2004, Level 3 acquired ICG Communications' wholesale dial-up business for $35 million. Then, in 2006, Level 3 purchased the rest of ICG Communications for $163 million, taking over ICG's fiber network and nationwide Points of Presence (PoPs). It then integrated these companies through 2010.

On April 11, 2011, Level 3 announced a tender offer had been made to acquire fellow Tier 1 provider Global Crossing[8] in an all-stock transaction,[9] which was approved by shareholders On August 5.[10] and completed on October 4, 2011. On October 20, 2011, Level 3 Communications reduced its total shares and transferred its stock listing from NASDAQ to the larger New York Stock Exchange.[11]

On May 14, 2012, Level 3 was contracted by European content provider Voxility to provide 250 Gbit/s or more to Voxility's three main data centers in North America and Europe.[12] On May 7, 2012, Level 3 was contracted by the U.S. Department of Defense's Defense Information Systems Agency to provide fiber-cable operations and maintenance, and IP-based infrastructure under a ten-year, indefinite contract with a maximum value of approximately $411 million.[13]

In July 2015, Level 3 acquired Black Lotus, a provider of protection against distributed denial of service (DDoS).[15] 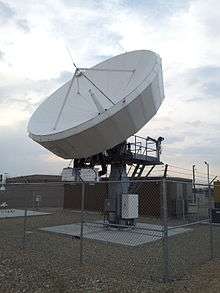 Level 3 Communications satellite dish on one of its two ground stations located in Boise, Idaho

Level 3 Communications operates a large network Internet. This includes 46 states in the continental United States,[17][18] South America, Western Europe,[4][19] and some cities in Asia. It uses transatlantic cables,[20] including "Yellow" /AC-2 (on which it owned two of the four fiber pairs after Viatels 2001 bankruptcy).[21] Level 3 Communications has also purchased 300 Gbit/s of capacity on the Apollo (cable system).[22]

It is the current owner of AS1[23] (following the acquisition of Genuity, from BBN Technologies ), but it uses AS3356 for operations. AS3356 as of 2007 consistently had one of the highest ranked connectivity degrees on the Internet.[24][25] It also operates the former Global Crossing network (AS3549) following the company acquisition in 2011.

Level 3 Communications delivers Netflix and Apple music and video content over the Internet.[26] The company runs a content delivery network which it acquired from Savvis in 2006.[27]

In 2006, Level 3 Communications announced with Internet2, an academic network, that they would deploy a next generation nationwide research network.[28]

On November 11, 2010 a dispute arose between Level 3 and Comcast, when Level 3 announced that they were "selected to serve as a primary content delivery network (CDN) provider for Netflix, Inc. to support the company’s streaming functionality."[31] Apparently, as a result of this distribution agreement, Comcast sought to renegotiate the peering agreement with Level 3 and sought a recurring fee for carrying the increased Level 3 internet traffic to and from Comcast broadband customers. Claims[32] and counter-claims[33] were made as the two companies sought to renegotiate the contract. In December 2010, the New America Foundation submitted information concerning the dispute to the FCC.[34]

On July 16, 2013, Level 3 Communications and Comcast seemingly ended their three-year dispute by issuing a statement that "Level 3 and Comcast have resolved their prior interconnect dispute on mutually satisfactory terms. Details will not be released."[35] On May 21, 2015, Level 3 and Comcast announced a new multi-year bilateral agreement to "enhance their existing network capacity while extending their mutual interconnection agreements, ensuring that both maintain ample capacity to exchange Internet traffic between their networks."[36][37]

In July 2013, the NSA was accused of wiretapping large parts of data on the German Internet Exchange Point DE-CIX which was denied by Level 3,[38] and a few months later, was accused of tapping connections between Google and Yahoo data centers.[39]