Not to be confused with Ihsan.

Ihsahn (born October 10, 1975 as Vegard Sverre Tveitan) is a Norwegian composer, multi-instrumentalist, and vocalist. He is best known for his work with Norwegian black metal band Emperor. He has appeared in Thou Shalt Suffer, played in Peccatum with his wife Ihriel (real name Heidi S. Tveitan), and now devotes himself to his solo albums.

His instructional videos on music have appeared in online publications such as Guitar World.[1] In style terms, his solo work and work with other artists have shown multiple musical forms from classical music to industrial metal to progressive metal and more. In terms of his personal beliefs, he has expressed support for Satanism and social darwinist thought while also showing respect to concepts such as meditation, stewardship of the environment, and traditional paganism as well as condemning acts of criminality and religious intolerance such as church arson.[2]

Born in the town of Notodden, Norway, Tveitan began playing piano at seven and guitar at ten and began recording songs shortly thereafter. His influences include heavy metal, classical, ambient, and techno. He grew up on a large farm in rural Norway.

Tveitan first met his musical partner, Tomas Haugen (also known as Samoth), at the age of thirteen at a music seminar. Tveitan gained Haugen's attention with his Iron Maiden patches.[3] In 1990 Tveitan joined Haugen's band Xerasia, a death metal band where he served as guitarist and keyboardist. They eventually changed their name to Embryonic sometime that year. A four-track demo titled The Land of the Lost Souls was self-financed and released in November. In 1991 they changed their name again to Thou Shalt Suffer. Several releases under this name were produced before Haugen left the band, leaving Tveitan the sole remaining member. He continues Thou Shalt Suffer as a side project to this day.

After the departure of Haugen from Thou Shalt Suffer, the two formed Emperor, where Tveitan again took on the role of guitarist. Emperor had a much more refined black metal sound which showcased Tveitan's developing keyboard skills, a distinct feature that would appear in many of his later releases. The band at this time received much support and encouragement from black metal pioneer Euronymous and after several demos, the Emperor EP was released in 1993 to much acclaim. Shortly afterwards, band-mates Haugen, Bård Eithun (also known as Faust) and Terje Schei (also known as Tchort) were arrested and imprisoned, leaving Tveitan to his own devices. He retreated to a property owned by his family to compose much of what would later become Anthems to the Welkin at Dusk, which was recorded after the parole of Haugen.

In 1995 the cult album Blood Must be Shed, by Zyklon-B was released featuring members of Emperor and Satyricon; Tveitan himself played synth. In 1998 Tveitan formed, along with his wife Heidi Tveitan (AKA Ihriel), Peccatum. The project was much more experimental in nature than Emperor, and would continue on for some time after Emperor's demise in 2001. Peccatum would come to feature Tveitan's trademark synth sound as well as clean and black vocals, eventually becoming his main project until its termination on March 4, 2006.

In 1999 Emperor released IX Equilibrium, Tveitan's third studio album with the group. Two years later, in 2001, Peccatum released their second studio album, Amor Fati. In the same year, Emperor released their fourth and final studio album, Prometheus: The Discipline of Fire & Demise. 'Prometheus' was entirely composed by Tveitan and featured more complex orchestration than previous works; though significantly less synthesizers than before. It was at this time Emperor mutually decided to dissolve, leaving Tveitan and his bandmates with more time to focus on their various side projects.

In December 2002, Ihsahn won the "Notodden Kommunes Kulturpris",[4] a culture prize given by his home city, Notodden, which is populated to about 12,500 inhabitants. He won the prize because he is considered the best-known inhabitant of Notodden, a great musician, a music teacher, and he arranges a lot of concerts for unknown bands. The fact that his band sold more than 500,000 copies was also a reason for getting the prize. 2002 also saw Tveitan contribute guest vocals to the song "Radical Cut", off Arcturus' album The Sham Mirrors.

2004 saw the release of Peccatum's third and final studio album, Lost in Reverie, with an EP titled The Moribund People following the year after. On September 30, 2005, Emperor made a surprise return at Scream magazine's 15-year anniversary party in Oslo at Rockefeller, a rock concert venue. The move was kept top secret, was only known by a handful of people, and they only played three songs. This was to announce the reuniting of the band for a few shows around Europe and America in 2006, namely at Wacken and Inferno Festival.

In April 2006, Tveitan released his first solo album, The Adversary. The album was entirely composed, performed, recorded and produced by him, with the exception of drums contributed by Asgeir Mickelson, and guest vocals on the track "Homecoming" by Kristoffer Rygg of Ulver. The album showcases his progressive influences as well as heavy metal, black metal and classical music. The Adversary was recorded at Symphonique Studios in Norway and was released on his label Mnemosyne Productions, which he founded in 2003 with Ihriel. A video was made for the opening track, "Invocation".

Tveitan lent his voice in 2007 to an animated character from the Adult Swim cartoon Metalocalypse, Eric von Wiechlinghammer, in the episode "Dethfashion". He released his second studio album, titled angL, the following year, featuring Lars K. Norberg on bass, Asgeir Mickelson on drums, and guest vocals from Mikael Åkerfeldt (of Opeth) on the track "Unhealer". 2008 also saw Tveitan start a column in the magazine Guitar World, titled "Left Hand Path". In March 2009, Tveitan performed some of his solo material live for the first time, in a one-off performance opening for Opeth in Norway. He has since made many festival appearances, playing a mix of solo material and Emperor covers. Fellow Norwegians Leprous serve as his backing band. 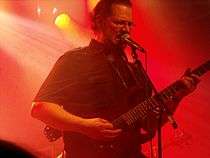 Ihsahn performing at Hole in the Sky in August 2010

Tveitan released his third solo album, After, in January 2010. Lars K. Nordberg and Asgeir Mickelson once again contributed bass and drums, respectively, with Jørgen Munkeby (of Shining) playing saxophone on several tracks as well. Later that year, in October, a Mnemosyne web update confirmed that Ihsahn had already begun writing for a fourth solo album, and was also focusing on upgrading his studio at home.[5]

2011 was a busy year for Tveitan. Aside from making his solo debut in the US at the annual ProgPower USA metal festival in Atlanta, Georgia, he also guested on two records, co-produced one with his wife, and continued to work on his fourth solo album. Additional details on the new record following its announcement have been scarce, with no possible release date mentioned. As of an August 2011 interview with Thrash Hits TV, drums for the album have been tracked and the recording process is said to be well underway.[6] Mentioned collaborators include Jørgen Munkeby once again[7] and Devin Townsend, who in a November 2011 interview mentioned that he was "singing a song for Ihsahn's new thing", but added that he could not elaborate any more at that point in time.[8]

Ihsahn described himself a Satanist in the 1990s. As he explained in 1994, he considered Satanism to be hard to define, as there are different ways of Satanism, and to be more of a category the individual would have to set for themselves. He considered most other adolescents to be "soulless" people, too involved in materialistic things. He said the imprisonment of the other Emperor members had both positive and negative effects; it meant a difficult period for the band, but the imprisonment also gave them publicity and therefore more possibilities to spread their ideas. Ihsahn additionally has said he has seen no reason to be physically destructive and has had no personal connection to the church burning cases that rocked Norway.[10] In a 1994 interview, Ihsahn described a Social Darwinist influence on his Satanism, calling himself anti-Christian and saying it is "not for a weak person", while also expressing respect towards European paganism, meditation and stewardship of the environment. He's additionally condemned acts of criminality and other forms of religious intolerance such as the aforementioned arson cases.[2]