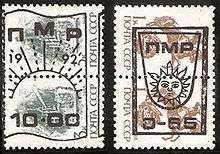 Stamps of the Soviet Union with overprints supposedly from the Pridnestrovian Moldavian Republic. These were produced in 1992 or 1993 without the knowledge or permission of PMR authorities.[1][2]

Illegal stamps are postage stamp-like labels issued in the names of existing independent countries or territories used to defraud postal administrations, stamp collectors, and the general public. Often, but not always, a member nation of the Universal Postal Union (UPU) will have asked the UPU to issue of an "International Bureau Circular" advising others of the illegal stamps. According to the UPU, the market is estimated to be at least $500 million per year.

Illegal stamps are to be distinguished from the many varieties of cinderella stamps which may have some of the same characteristics as illegal stamps but which are not usually issued in the name of an existing country.

There is no definitive method to identifying illegal stamp issues.

Illegal stamps are said to result in adverse consequences for several different parties. Postal administrations lose revenue to illegal issues and stamp collectors may lose money by mistakenly buying illegal stamps that have little or no monetary value. In addition, inexperienced or non-philatelists have been tricked into buying illegal stamps that are worthless memorabilia for their favorite hobby or interests. Additionally, legitimate stamp dealers may see their market, and the reputation of their industry, eroded by the illegal issues market. Finally, artists and photographers do not receive royalties from artistic work that is used on illegally printed issues.