Imerys S.A. is a French multinational company which specialises in the production and processing of industrial minerals. It is headquartered in Paris and is a constituent of the CAC Mid 60 index.

Imerys has operations in 50 countries and has more than 16,000 employees. It extracts and processes rocks and minerals on behalf of customers in the manufacturing and construction industries.

Groupe Bruxelles Lambert is the largest shareholder of Imerys.

The Company was founded in 1880 and for many years was known as Imetal.[1] It was founded by the Rothschild family, combining a few of their many subsidiaries in the metals and mining industries.[2]

The group's original activity was mining and transforming nickel. Its original name was Société Penarroya—Le Nickel (SLN). In the 1970s, the Group diversified and expanded its business. A holding company was created under the name of Imetal.

From 1990 onwards, Imetal focused its development on industrial minerals, pursuing an acquisition policy. The Group established positions in the white pigments business and then the graphite market. It later grew through acquisitions in refractories, clays, ceramic bodies and technical ceramics. Between 1994 and 1998, Imetal doubled in size: one-third through organic growth and two-thirds through external growth. In 1998, the business was structured around two sectors (Mineral Transformation and Metal Transformation) and organized into operating divisions.

In 1998, Imetal took over English China Clays plc, a major UK producer of white pigments (kaolin and calcium carbonates), and then changed its name to Imerys.[1] Following this acquisition, Imetal refocused its activity on minerals processing, selling its Metal Transformation business, including the North American companies Copperweld and Copperweld Canada (now Fushi Copperweld). To mark this development, Imetal changed its name, giving birth to Imerys on 22 September 1999.

Since 1997, the company has transformed into a specialist of specialty minerals, under the impetus first of Patrick Kron, who has since become the chief of Alstom, and then Gérard Buffière. 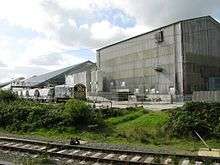 Active in 50 countries with more than 250 industrial locations, Imerys operates about 130 mines and extracts 30 different minerals or families of minerals. The company achieved sales of €4.1 billion in 2015.

Using minerals mined from its reserves and processed using complex processes, the group develops solutions for use by industrial clients in their products or production processes. Its minerals have many applications in everyday life, including construction, hygiene products, paper, paint, plastic, ceramics, telecommunications and beverage filtration.

Headquartered in Paris, it employs about 16,000 people.

The company specialises in the mining and distribution of industrial minerals. It is organised into four operating divisions:

These divisions are organized into operational activities serving specific markets.

These results are broken down as follows:

The geographical breakdown of 2015 revenue is as follows: Western Europe 44%, North America 24%, emerging countries 27% and Japan/Australia 5%.

Amongst its other activities, Imerys is bidding to develop one of the ten eco-towns proposed for construction in England. Planned for the site of former china clay mines in Cornwall, the project has the provisional title St Austell and Clay Country Eco-town.

Since January 2003, Imerys has supported the musical and operatic group Les Arts Florissants, and in particular its work promoting a resurgence of interest in the operas of numerous composers: Purcell's The Fairy Queen (Opéra-Comique, Paris in 2010), Lully's Atys (Opéra-Comique, Paris, and the Brooklyn Academy of Music, New York in 2011), Cavalli's La Didone (Caen Theatre in 2011), and Handel's Jeptha (Salle Pleyel, Paris in 2011). This ensemble is directed by the American-French conductor, William Christie, and specialized in Baroque music.