Cancer Research UK is a cancer research and awareness charity in the United Kingdom,[1] formed on 4 February 2002 by the merger of The Cancer Research Campaign and the Imperial Cancer Research Fund.[2] Its aim is to reduce the number of deaths from cancer. As the world's largest independent cancer research charity[3][4] it conducts research into the prevention, diagnosis and treatment of the disease. Research activities are carried out in institutes, universities and hospitals across the UK, both by the charity's own employees and by its grant-funded researchers. It also provides information about cancer and runs campaigns aimed at raising awareness of the disease and influencing public policy.[5][6][7]

On 18 July 2012 it was announced that Cancer Research UK was to receive its largest ever single donation of £10 million from an anonymous donor. The money will go towards the £100 million funding needed for the Francis Crick Institute in London, the largest biomedical research building in Europe.[8]

The British Empire Cancer Campaign (BECC) was founded in 1923, and initially drew a hostile response from ICRF and the Medical Research Council, who considered it a rival.[9][10] "The Campaign", as it was colloquially known, became a very successful and powerful grant-giving body. In 1970, the charity was renamed The Cancer Research Campaign (CRC).[10]

In 2002 the two charities agreed to merge to form Cancer Research UK, the largest independent research organisation in the world dedicated to fighting cancer (the largest, the National Cancer Institute, is funded by the US Government).[11][12] At the time of the merger, the ICRF had an annual income of £124m, while the CRC had an income of £101m.[11] 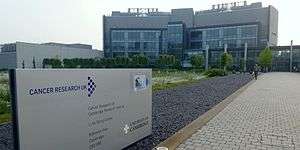 In the financial year 2014/15 the charity spent £422.67 million on cancer research projects (around 67% of its total income for that year). The bulk of the remaining costs were spent on trading and fundraising costs with a small amount also spent on information services, campaigning, advocacy, administration and other activities or was held in reserve.[1] The charity funds the work of over 4,000 researchers, doctors and nurses throughout the UK, supports over 200 clinical trials and studies cancer and cancer risk in over a million people in the UK.[13] Around 40% of the charity's research expenditure goes on basic laboratory research relevant to all types of cancer into the molecular basis of cancer. The research is intended to improve understanding of how cancer develops and spreads and thus provide a foundation for other research.[14] The rest of its funding is used to support research into over 100 specific cancer types, focusing on key areas such as drug discovery and development; prevention, early detection and imaging; surgery and radiotherapy; and cancers where survival rates are still low, such as oesophageal, lung and pancreatic cancers.[15]

The prostate cancer drug abiraterone was discovered in the Cancer Research UK Centre for Cancer Therapeutics at the Institute of Cancer Research in London.[16] In 2015 one of three recipients of the Nobel Prize in Chemistry, for mechanistic studies of DNA repair, was Professor Tomas Lindahl,[17][18] who joined Cancer Research UK as a researcher in 1981, and from 1986 was the first Director of their Clare Hall research institute in Hertfordshire, since 2015 part of the Francis Crick Institute. He brings the total of Nobel Prizes awarded to CRUK researchers to seven.[19]

In addition to funding individual researchers and projects, CRUK has several research institutes:[20]

It is a partner in:

The charity provides information to the general public, the scientific community and healthcare professionals. Through CancerHelp UK, a website written in Plain English for anyone affected by cancer, it provides information on cancer and cancer care, and a unique clinical trials database.[2] A specialist team of cancer information nurses provides a confidential telephone service, the Cancer Chat forum provides a place for users to talk to others affected by cancer, and mobile cancer awareness units deliver health information to locations where cancer incidence and mortality are higher than average. It provides statistical information to healthcare professionals via the CancerStats section It also provides publications for the public to order and download at www.cancerresearchuk.org/leaflets.

The charity works with the UK governments to inform and improve cancer services. It worked to bring about the smoking ban in England and continues to campaign for further action on smoking.[23] The charity lobbies for better screening programmes and advises on access to new cancer medicines, amongst other issues.

Fundraisers for CRUK include Race for Life and Stand Up to Cancer UK.

The charity works in partnership with other organisations. These include the UK Department of Health, the Wellcome Trust, the National Health Service, NICE, and the National Cancer Intelligence Network. It is one of the partners in the National Cancer Research Institute which also includes the Medical Research Council (UK) and Leukaemia & Lymphoma Research.[24] It is also a major partner in the Francis Crick Institute.[25]

In June 2011 Cancer Research UK was one of several health charities (along with the British Heart Foundation, the Alzheimer's Society and Parkinson's UK) targeted by the animal rights organisation Animal Aid in a publicity campaign involving a series of advertisements in British newspapers urging members of the public to stop giving donations to organizations that fund medical research involving animal experiments.[26][27]