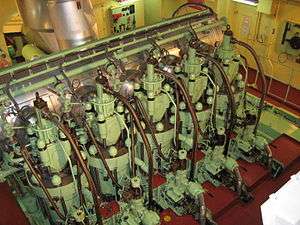 Cat diesels in rescueboat of Eire

The first marine craft to utilize inboard motors were steam engines going back to 1805 and the Clermont and the Charlotte Dundas. Harbour tugs, and small steam launches had inboard steam engines. In the 1880s the naphtha engine made its appearance and a few boat engines appeared. They were dangerous and difficult to run.

The gasoline (petrol) engine pioneer Gottlieb Daimler and Maybach built a four-cycle boat engine and tested it in 1887 on the Neckar River. Sintz in America built several commercially available engines from 1893. About 1895 the inboard oil engine emerged for small boats. From this, hundreds of small boat engine manufactures set up shop: Bolinder, Gray Marine Engine, Kermath, Union Iron Works, Caille, Palmer, Red Wing, St. Lawrence, and Buda; Sulzer, B and W, Gardner, and Ailsa Craig to mention a few. Two-stroke engines were popular for many years, however, the parallel development of the auto engine, with their many cylinders, became a natural transposition. Chrysler, Ford, Packard, and Hudson also made marine engines. 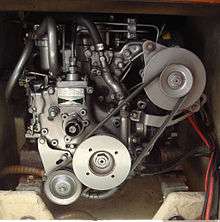 Inboard motors may be of several types, suitable for the size of craft they are fitted to. Boats can use one cylinder to v12 engines, depending if they are used for racing or trolling.

For pleasure craft, such as sailboats and speedboats, diesel, gasoline and electric[1] engines are used. Many inboard motors are derivatives of automobile engines, known as marine automobile engines. The advent of the stern drive propulsion leg improved design so that auto engines could easily power boats.

For larger craft, including ships (where outboard propulsion would in any case not be suitable) the propulsion system may include many types, such as diesel, gas turbine, or even fossil-fuel or nuclear-generated steam. Some early models used coal for steam-driven ships. 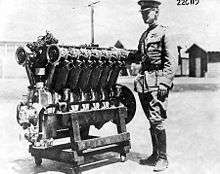 Major Henry H. Arnold with the first Liberty engine. Aircraft engines were later used in boats. Hap Arnold went on to command all US Airforces in WWII.

Some inboard motors are freshwater cooled, while others have a raw water cooling system where water from the lake, river or sea is pumped by the engine to cool it.

However, as seawater is corrosive, and can damage engine blocks and cylinder heads, some seagoing craft have engines which are indirectly cooled via a heat exchanger. Other engines, notably small single and twin cylinder diesels specifically designed for marine use, use raw seawater for cooling and zinc sacrificial anodes are employed to protect the internal metal castings.