Jákup Pauli Gregoriussen (born April 24, 1932 in Tórshavn, Faroe Islands) is the leading architect of the Faroe Islands. He is also a graphic artist and author of publications about the Faroese church. 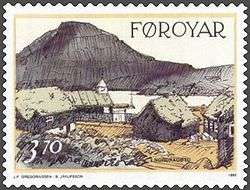 One of Gregoriussen's Faroese stamps (1992): The old wooden church in Gøta was built in 1833; at its 100th anniversary it was regarded as the oldest of its kind in the country. But the inhabitants of Hvalvík knew better, because such a building had already been built there in 1829. This and other stories are told in his book Gomlu trækirkjurnar (1995).

Jákup Pauli was born in 1932 to the fashion designer Liffa Gregoriussen (née Arge) and the sailor Magnus Gregoriussen. He was educated at the architectural school of the Royal Danish Academy of Art in Copenhagen.

Among his best-known buildings are the Listasavn Føroya (1970) and its extension to become the National Art Museum in 1993. As a graphic artist, he designed stamps for the Postverk Føroya and illustrated books. His main themes are views of towns and villages, not only in the Faroes but also from his travels, including, amongst others, Russia, Poland, Rome, and Egypt. 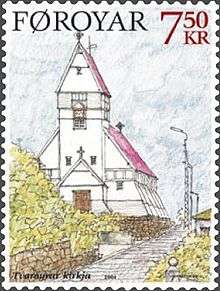 Church of Tvøroyri on Suðuroy

The stamps he drew for the Postverk Føroya are representative of Gregoriussen's graphical artwork.

For the books where Gregoriussen was not the author, but only contributed the illustrations, the name of the author is given.