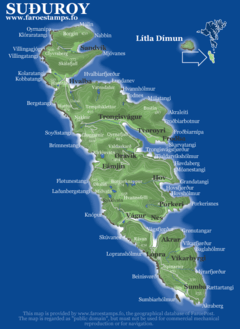 Suðuroy (literally South Island, Danish: Suderø) is the southernmost of the Faroe Islands. The island covers 163.7 square kilometres (63.2 sq mi). In 2012 there were 4,678 inhabitants, but there has been a gradual decline in the population numbers ever since the 1950s. In 2005 the population had been 5,036. Suðuroy region comprises this island and Lítla Dímun.

One ancient settlement, Víkarbyrgi was abandoned late in the 1990s. Another settlement, Akraberg was abandoned around 1350 because of the black death; the people who lived there at that time came from Friesland, and legend has it that people in Hørg (in Sumba) can trace their ancestry back to this settlement, which was situated on the southernmost point of the island.

Two more settlements were started in the early and mid-20th century: Botni, north west of Vágur, and Tjaldavík, in a bay south east of Øravík. Both sites have been abandoned again.

The highest point of Suðuroy is the mountain Gluggarnir (610 metres or 2,001 feet),[1] but the most famous peak is definitely the mountain of Beinisvørð northwest of the village of Sumba. The Beinisvørð and its scenery have been praised by the local poet Poul F. Joensen (1898–1970), as well as other Faroese poets. Suðuroy is the island which has the most islets and skerries. Suðuroy and the islets and skerries near the island number 263, including the island itself.[2] Suðuroy is also the only island of the 18 islands of the Faroes which has coalmines, one of which is still active. It is located in Hvalba, near the tunnel. Other coalmines were in Rangabotnur in Trongisvágur (on the south side of Trongisvágsfjørður), and in Fámjin.

There is one ferry which connects Suðuroy with the rest of the islands, MS Smyril operates two to three times daily between Tórshavn and Suðuroy, the ferry port in Suðuroy is located in Krambatangi on the south side of the fjord Trongisvágsfjørður. The journey takes two hours. There are two bus lines in Suðuroy, line 701 goes between Fámjin and Sandvík (the northern line) and line 700 operates between Tvøroyri and Sumba (the southern line).

From Tvøroyri there is an attractive walk across the mountains to a valley called Hvannhagi. There is a view over the valley and to Lítla Dímun and Stóra Dímun and the sea from above the valley. No roads lead to this valley. 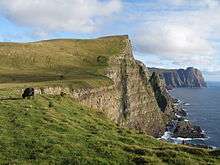 Vágseiði is a place with 200-metre-high (660 ft) cliffs towards south, but the road is down by the sea, the scerries are called Heltnarnar and a cliff on Vágseiði is called Múlatangi.

Eggjarvegur on the south side of the fjord, Vágsfjørður, leads up to Eggjarnar, 200 m (660 ft) on a vertical cliff with a view towards Beinisvørð in the south and to Vágseiði in the north. On Eggjarnar, visitors can find two concrete bunkers which were view points during the World War II. There is also an abandoned former Loran-C station, as it closed down in the mid-1970s.

South of Eggjarnar is the isthmus of Lopra, Lopranseiði, which is around 50 metres (160 ft) above sea level. An islet called Lopranshólmur is just a few meters from the cliffs of Lopranseiði. The cliff Beinisvørð is south of Lopranseiði, i between are some scerries, where the Dutch ship SS Westerbeek went shipwreck in 1742. Eighty-four men were on board, three died when the ship crashed, one fell down while trying to climb the cliff, but eighty men survived. They had to climb up the vertical cliff in order to survive, they found a place on the cliff where they could stand, they climbed from the ship to the cliff by the broken mast.

Fámjin is surrounded by some of the highest mountains of Suðuroy

Fámjin is one of two villages which are located on the west coast of Suðuroy, Sumba is the other one. All the other villages are located on the east coast. Fámjin is a has a special reef in the middle of the bay, which close the bay at low tide, except for a sailing channel made by men in order for fishing boats to be able to go fishing. The small fishing harbour is inside this reef. There is a lake just above the village, called Kirkjuvatn, the path starts near the church. Another attraction in Fámjin are the cliffs and gorge west of the village, called Prestgjógv (Priest Gorge). The main attraction of Fámjin however is the original Faroese flag, Merkið, which is hanging inside of the church. It was made in 1919, by some Faroese students who studied in Copenhagen. One of them was Jens Oliver Lisberg from Fámjin. The flag was not recognized as the official flag of the Faroe Islands until World War II, when the Faroes were occupied by the British, and Denmark by Germany, and the islands needed their own flag. Since then, the Merkið has been the official flag of the Faroe Islands. Inside the church of Fámjin is also the Fámjin stone, a Runestone with runic inscriptions.

Jóansøka - The Midsummer Festival of Suðuroy

Tvøroyri and Vágur take turns in hosting an annual civic-festival called Jóansøka. It can be described as a smaller version of the Ólavsøka held in Tórshavn. It runs in late June, in the last weekend of June, the rowing competition is always on Saturday of the Jóansøka weekend. 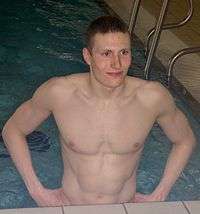 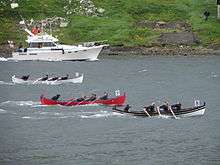 The oldest sports club in the Faroe Islands, the football club Tvøroyrar Bóltfelag (TB) was founded in Tvøroyri on May 13, 1892, and is thereby the 9th oldest football club in the Danish Kingdom. There were three other football clubs in Suðuroy: Vágs Bóltfelag, (VB), Royn from Hvalba and the football club from Sumba, but VB Vágur and Sumba merged in 2005 to VB/Sumba (a similar merger under the name Sumba/VB had been attempted in the 1995 season but it lasted only this one season). On January 1, 2010 a new football club has been founded in Suðuroy, it is called FC Suðuroy and currently consists of the prior VB/Sumba.

TB Tvøroyri currently (2013) competes in the best Faroese football division; FC Suðuroy plays in the second best division. Both TB Tvøroyri and VB Vágur have won the Faroese National Championship (TB seven times, the last being in 1987, and VB once in the year 2000); but since the success is lacking in recent years, there is a growing debate about merging the four teams into one, (VB and Sumba have, as mentioned above, already joined forces since 2005). Royn Hvalba is playing in 3rd division in 2013.

Suðuroy has recently had good results in international swimming competitions. The two swimming clubs in Suðuroy "Vágs Svimjifelag" and "Tvøroyrar Svimjifelag" joined forces 6 September 2007 and founded Susvim, which is for the whole island. A young man from Vágur has had the best results until now. Pál Joensen won triple gold in the 2008 European Junior Swimming Championships on the short course in the men's 400 M, 800 M and 1500 M Freestyle. Two years later he won silver in the Men's 1500 M Freestyle at the 2010 European Aquatics Championships.[4] Other swimmers from Susvim have also had good results in Faroe Islands and in Denmark and other countries and at the Island Games competitions.