James Harrison Coburn III[1] (August 31, 1928 – November 18, 2002) was an American actor. He was featured in more than 70 films, largely in action roles, and made 100 television appearances during his 45-year career,[2][3] ultimately winning an Academy Award in 1997 for his supporting role as Glen Whitehouse in Affliction.[4]

A capable, rough-hewn leading man, his toothy grin and lanky body made him a perfect tough guy in numerous leading and supporting roles in westerns and action films,[5] such as The Magnificent Seven, Hell Is for Heroes, The Great Escape, Charade, Our Man Flint, In Like Flint, Duck, You Sucker!, and Cross of Iron. Coburn provided the voice of Henry Waternoose in the Pixar film Monsters, Inc.[6]

During the late 1960s and early 1970s Coburn cultivated an image synonymous with "cool",[7] and along with such contemporaries as Lee Marvin, Steve McQueen, and Charles Bronson became one of the prominent "tough-guy" actors of his day.

Coburn was born on August 31, 1928 in Laurel, Nebraska, the son of James Harrison Coburn, Jr. and Mylet Coburn; his father was of Scots-Irish ancestry and his mother was an immigrant from Sweden. The elder Coburn had a garage business that was destroyed by the Great Depression.[8] Coburn himself was raised in Compton, California, where he attended Compton Junior College. In 1950, he enlisted in the United States Army, in which he served as a truck driver and an occasional disc jockey on an Army radio station in Texas. Coburn also narrated Army training films in Mainz, Germany.[9] Coburn attended Los Angeles City College,[10] where he studied acting alongside Jeff Corey and Stella Adler, and later made his stage debut at the La Jolla Playhouse in Herman Melville's Billy Budd.[11] Coburn was selected for a Remington Products razor commercial in which he was able to shave off 11 days of beard growth in less than 60 seconds,[12] while joking that he had more teeth to show on camera than the other 12 candidates for the part.[13]

Coburn's film debut came in 1959 as the sidekick of Pernell Roberts in the Randolph Scott western Ride Lonesome.[14] Coburn also appeared in dozens of television roles including, with Roberts, several episodes of NBC's Bonanza. Coburn appeared twice each on two other NBC westerns Tales of Wells Fargo with Dale Robertson, one episode in the role of Butch Cassidy, and The Restless Gun with John Payne in "The Pawn" and "The Way Back", the latter segment alongside Bonanza's Dan Blocker.[15] During the 1960 to 1961 season, Coburn co-starred with Ralph Taeger and Joi Lansing in the NBC adventure/drama series, Klondike, set in the Alaskan gold rush town of Skagway. When Klondike was cancelled, Taeger and Coburn were regrouped as detectives in Mexico in NBC's equally short-lived Acapulco. Coburn also made two guest appearances on CBS's Perry Mason, both times as the murder victim in "The Case of the Envious Editor" and "The Case of the Angry Astronaut." In 1962, he portrayed the role of Col. Briscoe in the episode "Hostage Child" on CBS's Rawhide. 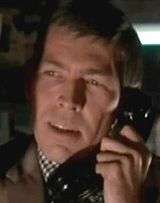 Coburn became well known in the 1960s and the 1970s for his tough-guy roles in numerous action and western films. He first appeared with Yul Brynner, Steve McQueen and Charles Bronson in the John Sturges film, The Magnificent Seven, and with Steve McQueen and Charles Bronson in The Great Escape, another Sturges film. Coburn played the part of a villainous Texan in the successful Charade (1963). He was then cast as a glib naval officer in Paddy Chayefsky's The Americanization of Emily. Coburn was signed to a seven-year contract with 20th Century Fox.[16] His performance as a one-armed Indian tracker in Major Dundee (1965) gained him much notice.

In 1966, Coburn became a genuine star following the release of the James Bond parody film Our Man Flint. The following year, he was voted the twelfth biggest star in Hollywood.[17]

In 1971, Coburn starred in the Zapata Western Duck, You Sucker!, with Rod Steiger and directed by Sergio Leone, as an Irish explosives expert and revolutionary who has fled to Mexico during the time of the Mexican Revolution in the early 20th century. Coburn teamed with director Sam Peckinpah for the 1973 film Pat Garrett and Billy the Kid, in which he played Pat Garrett. The two had worked together in 1965 on Major Dundee.

Peckinpah and Coburn turned next to Cross of Iron, a critically acclaimed war epic that performed poorly in the United States but was a huge hit in Europe. Peckinpah and Coburn remained close friends until Peckinpah's death in 1984. In 1973, Coburn was among the featured celebrities dressed in prison gear on the cover of the album Band on the Run made by Paul McCartney and his band Wings. Coburn returned to television in 1978 to star in a three-part mini-series version of a Dashiell Hammett detective novel, The Dain Curse, tailoring his character to bear a physical resemblance to the author. During that same year as a spokesman for the Joseph Schlitz Brewing Company, he was paid $500,000 to promote its new product in television advertisements by saying only two words: "Schlitz. Light."[19] In Japan he was so approved a masculine presence that he became an icon for its leading cigarette brand. He also supported himself in later years by exporting rare automobiles to Japan.[20] He was deeply interested in Zen and Tibetan Buddhism, and collected sacred Buddhist artwork.[21] He narrated a film about the 16th Karmapa called "The Lion's Roar".[22]

Because of his severe rheumatoid arthritis, Coburn appeared in very few films during the 1980s, yet continued working until his death in 2002. This disease had left Coburn's body deformed and in pain. "You start to turn to stone," he told ABCNEWS in an April 1999 interview. See, my hand is twisted now because tendons have shortened." For 20 years he tried a host of conventional and unconventional treatments, but nothing worked. "There was so much pain that … every time I stood up, I would break into a sweat," he recalled. Then, at age 68, Coburn tried something called MSM, methylsulfonylmethane, a sulfur compound available at most health food stores. The result, he said, was nothing short of miraculous. "You take this stuff and it starts right away," said Coburn. "Everyone I've given it to has had a positive response." MSM did not cure Coburn's arthritis, but it did relieve his pain, allowing him to move more freely and resume his career. [23] [24]

He spent much of his life writing songs with British singer-songwriter Lynsey de Paul and working on television series, such as Darkroom. Coburn returned to film in the 1990s and appeared in supporting roles in Young Guns II, Hudson Hawk, Sister Act 2: Back in the Habit, Maverick, Eraser, The Nutty Professor, Affliction, and Payback. Coburn's performance in Affliction eventually earned him an Academy Award for Best Supporting Actor. In addition, he provided the voice of Henry J. Waternoose III in Disney/Pixar's Monsters, Inc. 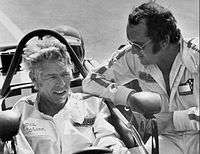 Coburn's interest in fast cars began with his father's garage business and continued throughout his life, as he exported rare cars to Japan.[10] Coburn was credited with having introduced Steve McQueen to Ferraris, and in the early 1960s owned a Ferrari 250 GT Lusso and a Ferrari 250 GT Spyder California SWB. His Spyder was the thirteenth of just fifty-six built. Coburn imported the pre-owned car in 1964, shortly after completing The Great Escape. [25] The car was restored and sold for $10,894,400 to English broadcaster Chris Evans, setting a new world record for the highest price ever paid for an automobile at auction.[26]

Cal Spyder #2377 was repainted several times during Coburn's ownership; it has been black, silver and possibly burgundy. He kept the car at his Beverly Hills-area home, where it was often serviced by Max Balchowsky, who also worked on the suspension and frame modifications on those Mustang GTs used in the filming of McQueen’s Bullitt. Coburn sold the Spyder in 1987 after twenty-four years of ownership. Over time he also owned the above-noted Lusso, a Ferrari Daytona, at least one Ferrari 308 and a 1967 Ferrari 412P sports racer.[27]

Coburn died of a heart attack on November 18, 2002 while listening to music at his Beverly Hills home. He was survived by his second wife, Paula (née Murad), son James IV and a stepdaughter. Coburn was cremated, his ashes were interred in Westwood Village Memorial Park Cemetery and marked by a stone bench inscribed with his name. At the time of his death, Coburn was the voice of the "Like a Rock" Chevrolet television ad campaign.

In The New Biographical Dictionary of Film, critic David Thomson states that "Coburn is a modern rarity: an actor who projects lazy, humorous sexuality. It is the lack of neurosis, an impression of an amiable monkey, that makes him seem rather dated: a more perceptive Clark Gable, perhaps, or even a loping Midwest Cary Grant. He has made a variety of flawed, pleasurable films, the merits of which invariably depend on his laconic presence. Increasingly, he was the best thing in his movies, smiling privately, seeming to suggest that he was in contact with some profound source of amusement".[28] Film critic Pauline Kael remarked on Coburn's unusual characteristics, stating that "he looked like the child of the liaison between Lt. Pinkerton and Madame Butterfly".[29] George Hickenlooper, who directed Coburn in The Man from Elysian Fields called him "the masculine male".[30] Andy García called him "the personification of class, the hippest of the hip", and Paul Schrader noted "he was of that 50's generation. He had that part hipster, part cool-cat aura about him. He was one of those kind of men who were formed by the Rat Pack kind of style."[31]