The Japanese bush warbler (Horornis diphone), known in Japanese as uguisu (ウグイス), is an Asian passerine bird more often heard than seen. Its distinctive breeding call can be heard throughout much of Japan from the start of spring.

The bird is drab-coloured and secretive. It is normally only seen in spring before there is foliage in the trees. In winter the call is a low chirping. The Japanese bush warbler tends to remain deep in the shadow of foliage during the day.

The Japanese bush warbler is olive brown above and tending toward dusky colors below. It has pale eyebrows. It has a beak that curves up making it look like it is smiling. The bird is typically 15.5 centimetres (6.1 in) in length.[2]

In summer it ranges from low hills to high mountains, preferring bamboo thickets and black pine trees. In winter it seeks cover at lower elevations.[2]

The propensity of the Japanese bush warbler to sing has led to the birds being kept as cage birds. Robert Young records that to encourage singing the cages of kept birds were covered with a wooden box with a small paper window that allowed only subdued light in.[3] Along with the return of the barn swallow the bush warbler's call is viewed by Japanese as a herald of springtime.

It is one of the favorite motifs of Japanese poetry, featured in many poems including those in Man'yōshū or Kokin Wakashū. In haiku and renga, uguisu is one of the kigo which signify the early spring. In poetry the bird is associated with the ume blossom, and appears with ume on hanafuda playing cards. There is also a popular Japanese sweet named Uguisu-boru (Uguisu Balls) which consists of brown and white balls meant to resemble ume flower buds. However, the distinctive song is not usually heard until later in spring, well after the ume blossoms have faded. In haiku the bird with this song is known as sasako, and the song is called sasanaki.

The beauty of its song led to the English name Japanese Nightingale,[3][4] although the Japanese bush warbler does not sing at night as the European nightingale does.[5] This name is no longer commonly used.

An uguisu-jō (jō = woman) is a female announcer at Japanese baseball games, or a woman employed to advertise products and sales with a microphone outside retail stores. These women are employed because of their beautiful 'warbling' voices. They are also employed to make public announcements for politicians in the lead-up to elections.

In Japanese architecture there is a type of floor known as "uguisubari", which is generally translated into English as "nightingale floor". These floors have squeaking floorboards that resemble the Japanese bush warbler's low chirping, and are meant to be so designed to warn sleepers of the approach of ninja. Examples can be seen at Eikan-dō temple, Nijō Castle and Chion-in temple in Kyoto.

The nightingale's droppings contain an enzyme that has been used for a long time as a skin whitening agent and to remove fine wrinkles. It is sometimes sold as "uguisu powder". The droppings are also used to remove stains from kimono. 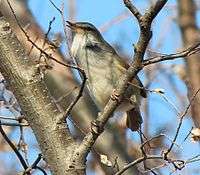