Jason King is a British television series screened in the United Kingdom during 1971 and 1972 which was produced by ITC Entertainment. Each episode was one hour in duration (including commercial breaks), and the series had a single season of 26 episodes. As well as its native UK, the series was shown internationally. The series has been released on DVD in Australia, the United States and Germany as well as its native UK.

The series featured the further adventures of the title character who had first appeared in Department S (1969). In that series he was a dilettante dandy and author of a series of adventure novels, working as part of a team of investigators. In Jason King he had left that service to concentrate on writing the adventures of Mark Caine, who closely resembled Jason King in looks, manner, style, and personality. None of the other regular characters from Department S appeared in this series.

In the course of visiting international locations as part of his research, or through being summoned by people needing assistance, King would be frequently embroiled in adventure stories featuring glamorous women, exotic locations (for the era), menacing villains, political turmoil, or espionage intrigue.

The first episode depicted King's retelling of a Mark Caine novel to a television executive, alternating between King's interpretation of events, and the television executive's version. King's version showed style and class, while the executive's version featured added suspense, more cliches, and had the women in more revealing costumes. In the footage representing both men's vision of the novel adapted for the screen, Mark Caine was portrayed by Wyngarde.

The titles of the Mark Caine books consisted of 4 short words, in the manner of some of Ian Fleming's James Bond novels. The Mark Caine title mentioned most often in the series was Index Finger Left Hand; another one was To China Yours Sincerely (parodying Fleming's From Russia With Love). 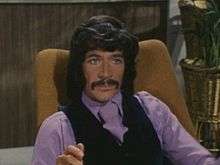 Subsequent episodes featured Wyngarde playing King trying to write his novels and being hassled by his publisher Nicola Harvester about deadlines. King, however, was usually distracted by beautiful women and his real-life adventures and was sometimes tricked by Ryland of the British Government into assisting the Government in international political matters: all of which later found their way into the adventures of the fictional Mark Caine.

The series was created by Dennis Spooner and like its predecessor was made by Lew Grade's ITC Entertainment production company (which had become successful with such series as The Saint and Danger Man), for ATV – Grade's broadcasting subsidiary of ITC.

King's choice of fashion was named by Mike Myers as an inspiration for his popular movie character Austin Powers.

An analogue of Jason King appears in the comic book series The Invisibles, written by Grant Morrison as "Mr. Six", the so-called "Last of the International Playboys", and member of "Division X"

In the X-Men comics, the character of Jason Wyngarde (aka Mastermind) was partially inspired by Jason King and Peter Wyngarde. Mastermind had first appeared in the 1960s, but took on the appearance and identity of Jason Wyngarde in the build-up to the X-Men's first confrontation with the Hellfire Club in the late 1970s. Wyngarde had played the leader of another Hellfire club in A Touch of Brimstone, an episode of the popular TV series The Avengers starring Patrick Macnee and Diana Rigg, who appeared in a leather costume that Jean Grey adopted as the Hellfire Club's Black Queen.[1]

He is also one of the inspirations (especially his clothes) for Kim Newman's psychic crime fighter and secret agent Richard Jeperson.

Wyngarde is said to have been the inspiration for the character of Fireball in the strip of the same name in D.C. Thompson's Bullet comic.

The Two Ronnies performed a sketch entitled "Jason King" with Ronnie Corbett putting on all the airs and graces of King and Ronnie Barker playing a suspect in a murder investigation from their third series in 1973.

Jason King was also the basis for Jason Bentley, played by Peter Richardson in the Comic Strip Presents episode Detectives on the Edge of a Nervous Breakdown (1993). Wyngarde, interviewed on BBC TV when this episode was originally transmitted, was flattered by the affectionate parody, but insisted that Jason King would never have been seen dead in crushed velvet!

The character appeared in Episode 1 of Series 10 of Rab C Nesbitt in which he surfaces from inside an armoured vehicle outside the house of the character of the show where he's holding a government minister hostage. On being offered a shirt by Jason King of the type he (Jason) might wear by way of appeasement Rab decides it is time to call an end to the siege and says "When Jason King says 'Jump!', well, you say 'How high?'"

In the 1972 Malaysian comedy film Laksamana Do Re Mi, the characters remark on the villain Menteri Fasola's resemblance to Jason King. Most younger Malaysians have no idea who Jason King is and do not get the 1970s cultural reference.[2]

Harry Enfield's Television Programme in 1992 also featured a sketch called 'The Playboys' which was heavily influenced by Jason King. In the spoof titles the actor portraying playboy 'Sam Moritz' was named as 'Jason Queen' (actually played by Harry Enfield).