For other uses, see Jayapura (disambiguation).

Jayapura City (Indonesian: Kota Jayapura, Dutch: Hollandia) is the provincial capital of Papua, Indonesia. It is situated on the island of New Guinea, on Yos Sudarso Bay (formerly known as Humboldt Bay). It covers an area of 935.92 km2, and borders Jayapura Regency to the west, Keerom Regency to the south, the nation of Papua New Guinea to the east, and the Pacific Ocean to the north. It had a population of 256,705 at the 2010 Census;[1] the latest official estimate (as at January 2014) is 315,872.

Jayapura is the largest city in the Indonesian part of New Guinea. It is served by Sentani Airport, located near Lake Sentani. A highway connects the city to Skow, a small town near the border with Papua New Guinea and continues beyond the border to Vanimo. The government is currently planning to build a railway from Jayapura to Sarmi. Further plans could connect Jayapura with Manokwari and Sorong. The project is planned for completion by 2030.[2]

The city comprises five districts (kecamatan), tabulated below with their populations at the 2010 Census:[1]

Jayapura is Sanskrit for "City of Victory" (jaya: "victory"; pura: "city") and was named by Suharto, who wanted to glorify his victories fighting Operation Trikora against the Netherlands. The last battle against the Dutch was fought in Jayapura from 14 August 1962 - 15 August 1962. Nowadays the Humboldt bay natives know the city as "Port Numbay".

Looking east to Yos Sudarso Bay, showing the floating village of Tobati (left) and Engros (right), just to the south of Jayapura.

The topography of Jayapura varies from valleys to hills, plateaux, and mountains up to 700 meters above sea level. Jayapura overlooks the Yos Sudarso Bay. Jayapura is about 94,000 ha in area, and is divided into 5 districts. Around 30% of the area is inhabited, with the remainder consisting of a rough terrain, swamps, and protected forest. The average temperature is 29 °C-31.8 °C. 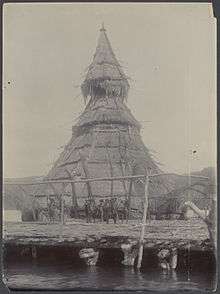 Documentation of the Siboga Expedition showing the community house of Tobati village natives of the Metu-Debi Island, current southern Jayapura.

Before its inclusion into the colonial government of the Dutch Indies, the location of present-day Jayapura was known as Numbay.[5] Before the arrival of the Dutch there was an active trade in Numbay, centered on the Island of Metui Debi and the area where the former Gereja Pengharapan ("Church of the Favor of God") stood, in Sam Ratulangi Road, being most active between 1897 and 1905. The mode of the trade was through barter for spices, cassava, salted fish and bird-of-paradise. The society of Numbay was led by an ondoafi (chief of the tribe). In the 1800s, Numbay maintained relations with the Ternate Sultanate.[5]

On September 28, 1909 a detachment of the Dutch navy under Captain F.J.P. Sachse came ashore at Humboldt Bay near the mouth of the Numbay river. Their task was the systematic exploration of northern New Guinea and the search for a natural border between the Dutch and German spheres on New Guinea. Their camp along the river was called Kloofkamp, a name still in use as the name of an ancient district of Jayapura. Forty coconut trees were cut down for the establishment of the camp. They were bought from the owners at a cost of one rijksdaalder (national dollar) per palm.

On March 7, 1910, the Dutch flag was raised and the settlement was named Hollandia. On the other side of the bay there was already a German camp, Germania-Huk (German Corner), which is now uninhabited and part of Indonesian territory. Hollandia was the capital of a district of the same name in the northeast of West New Guinea. The name Hollandia was used until 1962.

The northern part of Dutch New Guinea was occupied by Japanese forces in 1942. Allied forces drove out the Japanese after amphibious landings near Hollandia, from 21 April 1944. The area served as General Douglas MacArthur's headquarters until the conquest of the Philippines in March 1945. Over twenty U.S. bases were established and half a million US personnel moved through the area.[6]

In 1945, the Dutch made Hollandia the capital of Netherlands New Guinea. After the territory was handed over to the United Nations, on October 1, 1962, the city went by a dual Dutch/Indonesian name: Hollandia/Kota Baru (New Town). When Indonesia took control over the city on May 1, 1963, it became Kota Baru. The city was briefly renamed Sukarnapura',[7] after President Sukarno, until the end of 1968, when it acquired its present name.

Jayapura was struck by the Aitape Tsunami after the 1998 Papua New Guinea earthquake.[8]

Jayapura is the home of the Persipura, a professional football club that has produced many famous Papuan-Indonesian footballers[9] and have won the Indonesia Super League three times in the 2008–09, 2010–11 and the 2012–13 seasons. Persipura plays its home matches in the Mandala Stadium.