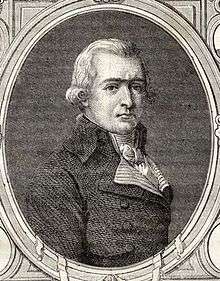 Jean-Pierre-André Amar or Jean-Baptiste-André Amar (May 11, 1755 – December 21, 1816) was a French political figure of the Revolution and Freemason.

Born in a rich family of cloth merchants in Grenoble, Amar was the son of the former Director of the Mint.[1] He became a lawyer for the local parlement in 1774. In 1786, he purchased the title of Trésorier de France for the tax region of the Dauphiné, which gave him a title in the French nobility, for 200,000 livres.[2]

In 1789, he was one of the founders of the Grenoble patriotic society, which in December of that year published the first edition of La Vedette des Alpes.[3] In 1790, Amar was elected vice-president of the Grenoble directory, and became a deputy to the National Convention for the département of Isère, and joined The Mountain, voting in favor of Louis XVI's execution during his trial.

Sent on mission with Jean-Marie-François Merlino to Ain and Isère in early 1793, he oversaw the levée en masse of 300,000 soldiers brought about by the outbreak of the French Revolutionary Wars and he made widespread arrests of "counter-revolutionaries". After the ousting of the Girondists from the Convention in late May and early June 1793, Amar joined the Committee of General Security on 13 September.[4] He was, with Marc-Guillaume Alexis Vadier, one of its most influential members. He was noted for his attacks on the Girondists and his order in October 1793 to arrest the 46 deputies who had protested against the violence of The Mountain.[5]

In November 1793 the Convention charged him, together with Fabre D'Eglantine, with investigating the Liquidation Scandal.[6] Amar's investigations uncovered the fact that Fabre himself had been deeply involved in the fraud. The arrest of Fabre on 13 January 1794 helped precipitate the power struggle between his ally Danton and Robespierre. On 16 March Amar presented his report on the Liquidation Scandal to the Convention, and on 31 March Amar was one of the Committee Members who signed the decree for the arrest of Danton.[7] However, Robespierre was sharply critical of Amar's report, which presented the scandal as purely a matter of fraud. Robespierre insisted that it was a foreign plot, demanded that the report be re-written, and used the scandal as the basis for rhetorical attacks on the foreign powers he believed were involved.[8] On 23 July 1794 Robespierre attacked Amar by name at a joint session of the Committees for his handling of the Liquidation Scandal.[9] Amar was involved in the Thermidorian Reaction from its very beginning.

Arrested himself as a former partisan of Terror (April 2, 1795),[10] he benefitted from an amnesty on October 26. Amar then opposed the establishment of the French Directory in November, and in February 1796 he presented a petition from 'Patriots of '89' urging the re-establishment of price controls on basic foods. The Directory refused to consider it.[11] He took part in the conspiracy of Gracchus Babeuf early in 1796; tried by the Court in Vendôme, he was acquitted on May 26.

He retired from public life, and lived most of his remaining years in Isère and Savoie, discovering devotional mysticism based on the works of Emanuel Swedenborg. When the Bourbon dynasty returned to power, he was not banished like other members of the Convention[12] He died in Paris.