It is the largest stadium in the UAE with more than 43,000 seats. It has developed a great history and heritage and has cemented its place in the country's history by being featured on the AED 200 banknote.

The stadium was opened in 1979[3] and has recently been renovated, with many of the facilities and amenities upgraded to ensure that it complies with international standards and can be used for a wide range of events.

The stadium hosted the 1996 AFC Asian Cup including the final, where the United Arab Emirates lost against Saudi Arabia in penalty shoot-outs. The stadium also hosted the 2007 Gulf Cup of Nations final between the United Arab Emirates and Oman. The semi finals and finals of 2009 and 2010 FIFA Club World Cup were also held at the stadium. The stadium will also be the hosting some the 2017 and 2018 FIFA Club World Cup[4] and 2019 AFC Asian Cup matches along five other stadiums.

Guided by the belief of the President His Highness Sheikh Zayed bin Sultan Al Nahyan in the role of sports toward youth and preparing them to perform their future role in building their country, directions were issued to the Town Planning Department in 1974 to build a comprehensive sports complex of high international standards in Abu Dhabi.

Zayed Sports City Stadium was the crux of the first project phase, and a 60,000 seat stadium was constructed. This phase also included perimeter fencing, utility services and an internal road network. It was completed in 1979 and the stadium was inaugurated in January 1980. The total cost of this phase was AED 550 million. 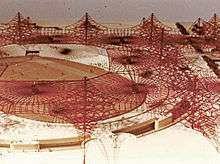 Model of a sports stadium in Abu Dhabi designed by Jörn-Peter Schmidt-Thomsen and Conrad Roland in the 1960s, which has never been realized.

The stadium included a gull size grass pitch surrounded facilities to host athletics competitions. An electronic boards and a sound system were installed as well as a modern electronic irrigation system. The building was designed to host international sporting events and provided media personnel with sufficient facilities to cover and broadcast tournaments via satellites.[5]

The external design of the stadium features iconic arches which are showcased in the venue’s logo as well as on the AED 200 banknote.

Throughout the years, the stadium has undergone significant renovations to ensure that it can accommodate the high-quality international events it was designed for. Hospitality areas, including the Royal Box interior and exterior, VIP seating and media seating were created throughout the years. Two scoreboards at either end zone were added in 2003. Renovations such as these have reduced the capacity to 43,791 public seats.

The stadium is a traditional, open-air stadium that is defined on its exterior by iconic arches. Within the stadium is a full-size football pitch and a wide concrete apron surrounds it. There are 42,355 general entry seats on two levels plus 1,436 hospitality seats and 277 media seats. There is also a royal box with indoor and outdoor viewing areas and six media / hospitality sky boxes. On the concourses are concession kiosks, toilets and first aid facilities.

Back of house areas include space for media, hospitality, players, referees and storage. There are also several offices located in the stadium.

Three LED scoreboards are present in the venue as well as a sound system for spectators. The venue is fully lit to the standard required for HDTV broadcasts.

Surrounding the stadium is a pre-event plaza, then a series of fountains. Beyond this is the ring road, parking lots, training pitches and the rest of the Zayed Sports City facilities.[6]

Zayed Sports City Stadium has hosted hundreds of events, large and small, in its history. Some of these have left a mark on the history of not only the stadium, but also the on Abu Dhabi, the UAE and the GCC.