Jozef Maria Laurens Theo "Jo" Cals (18 July 1914 – 30 December 1971) was a Dutch politician of the defunct Catholic People's Party (KVP), now merged into the Christian Democratic Appeal (CDA). He served as Prime Minister of the Netherlands from 14 April 1965 until 22 November 1966.

After his premiership, Cals semi-retired from active politics and served as a civil servant leading several governmental commissions.[2] On 5 December 1966 he was granted the honorary title of Minister of State, which he held until his death. 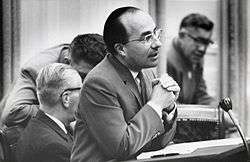 Jo Cals as Minister of Education, Arts and Sciences during a meeting of the House of Representatives in 1961. 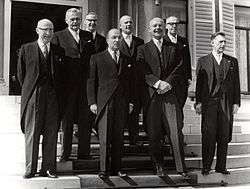 Jo Cals at the inauguration of his cabinet in 1965.

Jozef Maria Laurens Theo Cals was born in Roermond on 18 July 1914. After completing his secondary education in his home town, he studied for the priesthood in Rolduc. In 1935, however, he interrupted his theological training to study law at the Radboud University Nijmegen, after graduating in 1940 he practised law in that same city up until 1950, in the meantime also teaching economics at his old secondary school in Roermond.

In 1945 Cals became leader of the Catholic People's Party in the municipal council of Nijmegen until 1946. He was elected as a Member of the House of Representatives in 1948. From 15 March 1950 to 2 September 1952 he was State Secretary for Education, Arts and Sciences, serving from 15 March 1950 until 2 September 1952 in the Drees-Van Schaik and Drees I cabinets. He became Minister of Education, Arts and Sciences serving from 2 September 1952 until 24 July 1963 in the cabinets Drees II and III, Beel II and De Quay, he helped pass the Mammoetwet, a law that transformed secondary education. In the debate, he spoke for 6 hours and 50 minutes, setting a record. In 1963, however, he returned to the House of Representatives. Alongside his duties there, he was a member of the board of governors of the University of Groningen, chairman of the Arts Council and a member of the Press Council.

In the aftermath of the collapse of the Marijnen cabinet, Cals became Prime Minister of the Netherlands on 14 April 1965, a premiership lasting until 22 November 1966, when his Cals cabinet was suddenly brought down in an attack on its budget, known as the "Night of Schmelzer".

Cals was in 1930, just after the foundation as a separate Scouting organisation, one of the first members of De Katholieke Verkenners (The Catholic Scouts). He went to the 4th World Scout Jamboree in Gödöllo, Hungary in 1933. After the liberation of the southern part of the Netherlands in 1944 he was one of the main forces in rebuilding Catholic Scouting as a separate Scouting movement in the Netherlands. During his second term as Minister of Education, Arts and Sciences, the State Secretary for Education, Arts and Sciences was his former Scout Master René Höppener.

Between 1968 and 1970, Cals was in charge of the Dutch entry to the Expo '70 in Japan. From 1967 he was chairman of the National Advisory Committee on the amendment of the Constitution.

Cals was a hard worker but this was at the expense of his health, he died from an unspecified neurological disease in the MCH Westeinde hospital in The Hague on 30 December 1971 at the age of 57.[3]