Radboud University Nijmegen (abbreviated as RU, Dutch: Radboud Universiteit Nijmegen, formerly Katholieke Universiteit Nijmegen) is a public university with a strong focus on research located in Nijmegen, the Netherlands. It was established on 17 October 1923 and is situated in the oldest city of the Netherlands. The RU has seven faculties and enrolls over 19,900 students. It was internationally ranked 156th by the QS World University Rankings.[5] 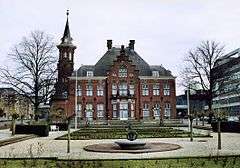 Heyendaal castle (now serving as the Faculty Club of the university) is of old the center of Heyendaal estate, where later on most Radboud University buildings have been established.

The first Nijmegen University was founded in 1655 and terminated around 1680. The Radboud University Nijmegen was established in 1923 as the Katholieke Universiteit Nijmegen (Catholic University of Nijmegen) and started out with 27 professors and 189 students. It was founded because the Roman Catholic community wanted its own university. At the time, Roman Catholics in the Netherlands were disadvantaged and occupied almost no higher posts in government. After fierce competition with the cities of Den Bosch, Tilburg, The Hague, and Maastricht, Nijmegen was chosen to house the university. The subsequent Second World War hit the university hard. Many prominent members were lost, among them professors Robert Regout and Titus Brandsma. They were deported to Dachau concentration camp. In 1943, rector Hermesdorf refused to cooperate with the Germans. On 22 February 1944, the university lost many buildings in a bombardment. Classes resumed in March 1945. Since then, student numbers rose steadily from 3,000 in 1960 to 15,000 in 1980.

In 2004, the university changed its name to Radboud University Nijmegen, after Saint Radboud of Utrecht, a bishop who lived around 900.[6]

The university's medical department is linked to the Radboud University Medical Center, a large teaching hospital located on the Heyendaal campus along with the other university buildings such as the Huygensgebouw which contains the Natural Sciences. The Erasmus Tower and the Erasmusgebouw which contain the Faculty of Arts are situated at the south end of the campus next to the sports centre (USC). Recent building projects included new on-campus residence halls, the sports centre and several science buildings. The new Grotiusgebouw is recently built and will offer more room to the Faculty of Law. The university campus is located next to Heyendaal train station. Frequent shuttle buses connect the university to Nijmegen Central Station and the city centre.

Radboud University is noted for its green campus, often listed among the most attractive in the Netherlands.[7] 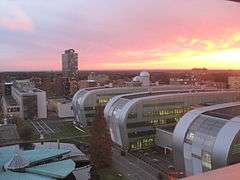 Radboud University has seven faculties and enrols over 19.900 students in 112 study programs (37 bachelor's and 75 master's programs).[8]

All English-taught Master’s programmes are research-based programmes. They are taught within the Faculties of Arts, Law, Social Sciences, Medical Sciences, Sciences and Philosophy, Theology and Religious Studies, besides the Interfaculty Research school and the Nijmegen School of Management.[9]

(Master's in italic are specialisations)

The QS World University Rankings ranked the university 177th in the world in 2015.[10] The university scored 45th in a 2012 ranking of European research universities.[nb 1]

The coat of arms was designed at the time of the founding of the university by the goldsmith workshop of the Brom family in Utrecht. The lower part is the coat of arms of the Catholic Church in the Netherlands. The dove is the symbol of the Holy Spirit. The shield is surmounted by the crown of Charlemagne. Underneath is the motto "In Dei Nomine Feliciter."[19] 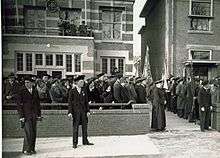 O'42 (after its address Oranjesingel 42) of old has played a significant role in the history of the Radboud University, especially of the social and administrative aspects of studying there.