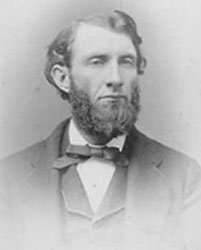 John William Burgess (August 26, 1844 – January 13, 1931) was a pioneering American political scientist. He spent most of his career at Columbia University and is regarded as having been "the most influential political scientist of the period.[1]

Burgess was born in Tennessee and fought for the Union in the American Civil War. He studied history at Amherst College, graduating in 1867, then at the universities of Göttingen, Leipzig, and Berlin for a number of years, where he studied under distinguished German scholars of the time: the historian Johann Gustav Droysen, the economist Wilhelm Roscher, the historian Theodor Mommsen, whose linking history with law strongly influenced Burgess's own approach, and Rudolf von Gneist. He was much influenced by the training in research methods characteristic of German universities of the time. He sought to import these methods of research and scholarship, first to Amherst (unsuccessfully) and later to Columbia. He maintained a lifelong interest in German-American relations.

In 1876, Burgess was appointed to a professorship in the Law School of what later became Columbia University, a post he held until his 1912 retirement. While at Columbia, Burgess taught constitutional law but more importantly, was instrumental in founding the discipline of political science in the USA. In 1886, he founded the Political Science Quarterly. He was instrumental in establishing the Faculty of Political Science, the first major institutionalized program in the United States granting the degree of Doctor of Philosophy. These endeavors have led to his being widely regarded as one of the founders of modern political science.

Burgess was a strong influence on the Dunning School of Reconstruction. Burgess "agreed with the scholarly consensus that blacks were inferior,"[2] and wrote that "black skin means membership in a race of men which has never of itself succeeded in subjecting passion to reason, has never, therefore, created any civilization of any kind."[3]

For years, he was memorialized on the Columbia campus with the designation of the "Burgess-Carpenter Classics Library" within Butler Library. Nicholas Murray Butler credited the teachings of Burgess along with Alexander Hamilton for the philosophical basis of his Republican principles.[4]

According to Leon Epstein, Burgess was a leading academic figure in the last decades of the nineteenth century, but some of his influence was considered negative (due to his advocation of formalism as it applied to politics and governance) and he caused somewhat of an intellectual rebellion at Columbia. Leon Epstein, 1986. Political Parties in the American Mold. University of Wisconsin Press.