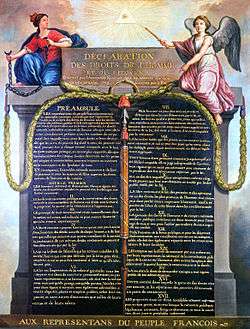 Constitutional law is the body of law which defines the relationship of different entities within a state, namely, the executive, the legislature, and the judiciary.

Not all nation states have codified constitutions, though all such states have a jus commune, or law of the land, that may consist of a variety of imperative and consensual rules. These may include customary law, conventions, statutory law, judge-made law, or international rules and norms. Constitutional law deals with the fundamental principles by which the government exercises its authority. In some instances, these principles grant specific powers to the government, such as the power to tax and spend for the welfare of the population. Other times, constitutional principles act to place limits on what the government can do, such as prohibiting the arrest of an individual without sufficient cause. In most nations, including the United States, constitutional law is based on the text of a document ratified at the time the nation came into being. Some constitutions rely heavily on unwritten rules known as constitutional conventions; their status within constitutional law varies, and the terms of conventions are in some cases strongly contested.[1]

Constitutional laws may often be considered second order rule making or rules about making rules to exercise power. It governs the relationships between the judiciary, the legislature and the executive with the bodies under its authority. One of the key tasks of constitutions within this context is to indicate hierarchies and relationships of power. For example, in a unitary state, the constitution will vest ultimate authority in one central administration and legislature, and judiciary, though there is often a delegation of power or authority to local or municipal authorities. When a constitution establishes a federal state, it will identify the several levels of government coexisting with exclusive or shared areas of jurisdiction over lawmaking, application and enforcement.

Human rights or civil liberties form a crucial part of a country's constitution and govern the rights of the individual against the state. Most jurisdictions, like the United States and France, have a codified constitution, with a bill of rights. A recent example is the Charter of Fundamental Rights of the European Union which was intended to be included in the Treaty establishing a Constitution for Europe, that failed to be ratified. Perhaps the most important example is the Universal Declaration of Human Rights under the UN Charter. These are intended to ensure basic political, social and economic standards that a nation state, or intergovernmental body is obliged to provide to its citizens but many do include its governments.

Some countries like the United Kingdom have no entrenched document setting out fundamental rights; in those jurisdictions the constitution is composed of statute, case law and convention. A case named Entick v. Carrington[2] is a constitutional principle deriving from the common law. John Entick's house was searched and ransacked by Sherriff Carrington. Carrington argued that a warrant from a Government minister, the Earl of Halifax was valid authority, even though there was no statutory provision or court order for it. The court, led by Lord Camden stated that,

"The great end, for which men entered into society, was to secure their property. That right is preserved sacred and incommunicable in all instances, where it has not been taken away or abridged by some public law for the good of the whole. By the laws of England, every invasion of private property, be it ever so minute, is a trespass... If no excuse can be found or produced, the silence of the books is an authority against the defendant, and the plaintiff must have judgment."[3]

The commonwealth and the civil law jurisdictions do not share the same constitutional law underpinnings.

Another main function of constitutions may be to describe the procedure by which parliaments may legislate. For instance, special majorities may be required to alter the constitution. In bicameral legislatures, there may be a process laid out for second or third readings of bills before a new law can enter into force. Alternatively, there may further be requirements for maximum terms that a government can keep power before holding an election.

Constitutional law is a major focus of legal studies and research. For example, most law students in the United States are required to take a class in Constitutional Law during their first year, and several law journals are devoted to the discussion of constitutional issues.

The rule of law

The doctrine of the rule of law dictates that government must be conducted according to law. This was first established by British legal theorist A. V. Dicey.

Dicey identified three essential elements of the British Constitution which were indicative of the rule of law:

Dicey’s rule of law formula consists of three classic tenets. The first is that the regular law is supreme over arbitrary and discretionary powers. "[N]o man is punishable ... except for a distinct breach of the law established in the ordinary legal manner before the ordinary courts of the land."[6]

The separation of powers

The Separation of Powers is often regarded as a second limb functioning alongside the Rule of Law to curb the powers of the Government. In most modern nation states, power is divided and vested into three branches of government: The Executive, the Legislature and the Judiciary. The first and the second are harmonized in traditional Westminster forms of government. [7]