He was a son of Ralph Montagu, 1st Duke of Montagu, by his first wife Elizabeth Wriothesley. His maternal grandparents were Thomas Wriothesley, 4th Earl of Southampton and Lady Elizabeth Leigh.[1]

On 22 June 1722, George I appointed him governor of the islands of Saint Lucia and Saint Vincent in the West Indies. He in turn appointed Nathaniel Uring, a merchant sea captain and adventurer, as deputy-governor. Uring went to the islands with a group of seven ships, and established settlement at Petit Carenage. Unable to get enough support from British warships, he and the new colonists were quickly run off by the French.[3]

In 1739, the country's first home for abandoned children, the Foundling Hospital was created in London. Montagu was a supporter of this effort and was one of the charity's founding governors. He also financed the education of two notable Black British figures of the age, Ignatius Sancho and Francis Williams, sending the latter to Cambridge University.[2]

In 1745, he raised a cavalry regiment known as Montagu's Carabineers, which, however, was disbanded after the Battle of Culloden.[1]

He was a notorious practical joker, his mother-in-law writing of him that "All his talents lie in things only natural in boys of fifteen years old, and he is about two and fifty; to get people into his garden and wet them with squirts, and to invite people to his country houses and put things in beds to make them itch, and twenty such pretty fancies as these."[4]

He is said to have once dunked the political philosopher Montesquieu in a tub of cold water as a joke.[5]

The duke's country place, Boughton House, Northamptonshire, was laid out by him as a miniature Versailles, and now belonging to the Buccleuch family. After his death, his town residence, Montagu House, Bloomsbury, on the present site of the British Museum, received and for many years held the national collections, which under the name of the British Museum were first opened to the public in 1759.[1] 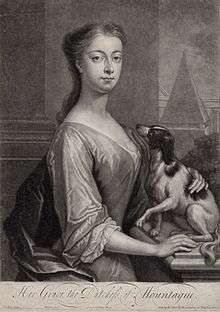 Engraving by John Simon of Mary Montagu, Duchess of Montagu.

Montagu and his wife Lady Mary Churchill were parents to five children:[6]

As none of Montagu's sons survived him, his titles became extinct upon his death in 1749. His estates were inherited by his daughter Mary, whose husband, George Brudenell, 4th Earl of Cardigan assumed the name and arms of Montagu, and in 1766 was created 1st Duke of Montagu (second creation). In 1790 this second creation dukedom of Montagu also became extinct; his only son, who had been created Baron Montagu of Boughton, having predeceased him. His daughter Elizabeth married Henry Scott, 3rd Duke of Buccleuch, 5th Duke of Queensberry who thus acquired all the unentailed property of the Dukes of Montagu.[7]

This article is issued from Wikipedia - version of the 1/29/2016. The text is available under the Creative Commons Attribution/Share Alike but additional terms may apply for the media files.