Jonathan Charles Lucroy (born June 13, 1986) is an American professional baseball catcher for the Texas Rangers of Major League Baseball (MLB). He previously played for the Milwaukee Brewers. In 2014, Lucroy was an MLB All-Star and won the Fielding Bible Award.

Lucroy attended Umatilla High School in Umatilla, Florida. He attended the University of Louisiana at Lafayette for three years, and became one of the most successful players in Ragin' Cajuns history. Over his career, he set the school record in doubles (54), runs batted in (184), and total bases (414) as well as recording the second most career hits (241) in just three seasons.[1] His individual accolades include being named a Louisville Slugger Freshman All-American (2005), All-Sun Belt Conference (2005, 2007), Sun Belt Conference All-Tournament Team (2006), Sun Belt Conference Academic Honor Roll (2006). Lucroy led the Ragin' Cajuns to two NCAA Regional appearances (2005, 2007) in his freshman and junior seasons respectively.[2]

Lucroy was drafted by Milwaukee in the 3rd round of the 2007 amateur entry draft, 101st overall. He made his professional debut in 2007 with the Rookie league Helena Brewers. He went on to be named a Post-Season All-Star, while also earning Baseball America Rookie All-Star honors. In 2008, he split the season between the Class A West Virginia Power and Class A-Advanced Brevard County Manatees. He was named a Mid-Season All-Star during his time with West Virginia. Lucroy spent the entire 2009 season with the Double-A Huntsville Stars. For the third season in a row, he earned all-star minor league honors when he was named a Mid-Season All-Star in the Southern League. He began the 2010 season with Huntsville, and was later promoted to the Triple-A Nashville Sounds.

On May 21, 2010, Lucroy was called up to Milwaukee and made his major league debut that day against the Minnesota Twins in the first ever interleague game at Target Field. He recorded his first major league hit in his first at-bat against Nick Blackburn. He became the team's everyday starter at catcher for the second half of the season, and hit .253 over that time. In 2010, which was Lucroy's rookie season, he only had one passed ball in 655 innings. He was unhappy with his performance at the plate during his first season in the majors, and vowed to improve in that area. Despite his displeasure with his performance, coaches with the team were vocal about the difficulties facing a rookie catcher and commended Lucroy for his performance.[4] 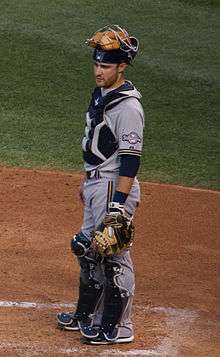 Lucroy catching for the Milwaukee Brewers in 2011

Lucroy missed the first ten games of the 2011 season with a broken right pinky finger. When he returned, he again was the team's everyday starter at catcher, entering his first full season in the majors.

On May 28, 2011, in a game against the San Francisco Giants at Miller Park, Lucroy successfully executed a walk-off suicide squeeze, batting in Ryan Braun. He finished the 2011 regular season batting .265 with 12 home runs and 59 RBIs.[5]

Prior to the 2012 season, Lucroy and the Brewers agreed to a five-year extension with a club option for a sixth year. The deal guarantees Lucroy at least $11 million, and can be worth as much as $13 million.[6] In May 2012, Lucroy broke his hand when a suitcase fell on it, and he went onto the disabled list.[7]

On August 30, 2012, Lucroy hit a grand slam and drove in seven runs for the Brewers in their loss to the Chicago Cubs, 12–11, at Wrigley Field. Lucroy turned out to be the first catcher to have two games in a single season with 7 or more RBI since Major League Baseball began officially tracking the RBI statistic in 1920 (he first did it on May 20 against the Minnesota Twins). In addition, Lucroy became the first Brewer to collect a pair of seven-RBI games in team history.[8]

Despite spending a significant amount of time on the DL in 2012, Lucroy had something of a breakout season for the Brewers. He became a player capable of getting clutch hits with runners in scoring position, and his power has become more and more noticeable. He hit 12 home runs in 2012, the same number as in 2011, but he did it in over 100 fewer at bats (316). He also managed 58 RBIs, and career averages in the following statistics—batting average of .320, OBP of .368, SLG of .531, and an OPS of .881.

His breakout season was made even more impressive by the increased defensive presence behind the plate. He has long been known as a capable-to-above-average defending catcher, but his 2012 season proved that he has been one of the best defensive catchers in the game.

In 2013, Lucroy had a strong season, taking over the three spot in the lineup after Ryan Braun was suspended for steroid use. He also made his major league debut at first base, even though he had never played there before. He played first whenever Wily Peralta pitched, as Martin Maldonado became Peralta's personal catcher. Whenever Lucroy needed a day off, he often played first base instead of sitting out so that his bat could stay in the lineup. He finished the 2013 season strong, batting .280 and having 18 home runs, a career high.

On September 27, 2014, Lucroy hit his 46th double as a catcher, surpassing Iván Rodríguez's previous high of 45.[9] In the final game of the regular season, Lucroy had a batting average of .299, and needed at least two hits for a chance to finish the season at or over .300. After going hitless in his first two at-bats, Lucroy got singles in his last two at-bats, which got his batting average to .301, at which point he was pulled from the game to protect his average. 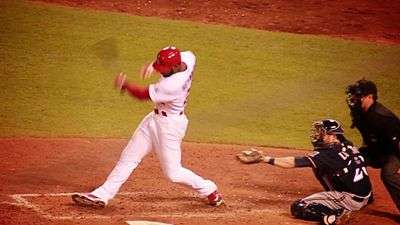 Lucroy catching a foul ball against the St. Louis Cardinals in 2015

Lucroy finished the 2014 season with a .301 average, 13 home runs, 69 RBI's, and a National League-leading 53 doubles. He also showed a great eye at the plate, walking 66 times while striking out only 71 times. He finished 4th in National League MVP voting.

On July 30, 2016 the Brewers agreed to trade Lucroy to the Cleveland Indians, but he exercised his no-trade clause, costing himself a chance to play in the 2016 World Series. [10] and vetoing the trade.[11] On August 1, the Brewers traded Lucroy and Jeremy Jeffress to the Texas Rangers for Lewis Brinson, Luis Ortiz and a player to be named later.[12]

Lucroy was born in Eustis, Florida, and raised in Umatilla, Florida. He has two brothers. One, Matthew, is an EMT/FF. The other, David, played college baseball for East Carolina University and was drafted by the Brewers.[14] His cousin Jeremy Lucroy also played baseball for the Ragin' Cajuns.

Lucroy is a Christian.[15] He Is married to Sarah, with whom he has one daughter.[16]