The Sun Belt Conference is a collegiate athletic conference that has been affiliated with the NCAA's Division I since 1976. Originally a non-football conference, the Sun Belt began sponsoring football in 2001. Its football teams participate in the Division I Football Bowl Subdivision (FBS). The 12 member institutions of the Sun Belt are distributed primarily across the southern United States.

The conference did not sponsor football until 2001, when the league added former Big West Conference members New Mexico State University and the University of North Texas and former Ohio Valley Conference member (an FBS Independent on football) Middle Tennessee State University as full members (all 3 of them joined a year earlier for all sports in the 2000-01 school year) and added FBS Independent University of Louisiana at Monroe and Big West member University of Idaho as "football-only" members. These new members gave the Sun Belt seven football playing members in their first season, as Arkansas State and Louisiana–Lafayette were already full members which sponsored football. Another Big West school, Utah State University, was added as a "football-only" member in 2003, then departed in 2005 with Idaho and New Mexico State for the Western Athletic Conference (WAC).

Longtime Sun Belt member Western Kentucky joined the Sun Belt's football conference in 2009 after its Board of Regents voted to upgrade the school's football program to Division I FBS.[1]

On November 11, 2009, New Orleans announced they were investigating a move from Division I to the NCAA's Division III. In order to maintain athletic scholarships, UNO instead opted for entry into Division II. On April 20, 2011, UNO officially received transition approval from the NCAA Division II Membership Committee.[2] (UNO later decided to remain in Division I, and joined the Southland Conference in 2013.)

On April 9, 2012, Georgia State, one of the founding members of the Sun Belt Conference, announced that it would be returning to the conference as a full member in 2013. As part of the move, the football program began a transition from FCS to FBS in the 2012 season; it played a full Sun Belt schedule as a "transitional" FBS member in 2013, and became a full FBS member, with bowl eligibility, in 2014.[3] On May 2, 2012, Texas State University announced it would leave the WAC after just one year and join the Sun Belt in July 2013 to begin play for the 2013-14 academic year. At the press conference to announce Texas State's addition, Sun Belt Commissioner Karl Benson also hinted that more changes could be on the way for the conference.[4] On May 25, 2012, the conference announced that the University of Texas at Arlington had accepted an invitation to join the conference and would become a full member by 2013.[5]

These moves depleted the Sun Belt and made the need to expand their membership more urgent than ever, as the Sun Belt was left with ten full members and only eight members that sponsor football (the minimum number required for a conference to sponsor football at the FBS level) for the 2013 season. Appalachian State University accepted an invitation on March 27, 2013 to join the Sun Belt effective July 1, 2014.[9] Georgia Southern University accepted a similar Sun Belt invitation at the same time as Appalachian State.[10] Appalachian State and Georgia Southern both joined for all sports from the Southern Conference on July 1, 2014. Both schools have been very successful within the Football Championship Subdivision, combining to win 9 national championships since 1985. They will be upgrading to the Football Bowl Subdivision, and will be eligible for Sun Belt conference championships in 2014, but will not be postseason eligible in football until 2015.

On September 1, 2015, Coastal Carolina University accepted an invitation to join the Sun Belt Conference. The university joined in all sports except for football starting July 1, 2016, with football joining in 2017.[15]

The conference announced on March 1, 2016 that the affiliation agreement with Idaho and New Mexico State would not be extended past the 2017 season.[16] 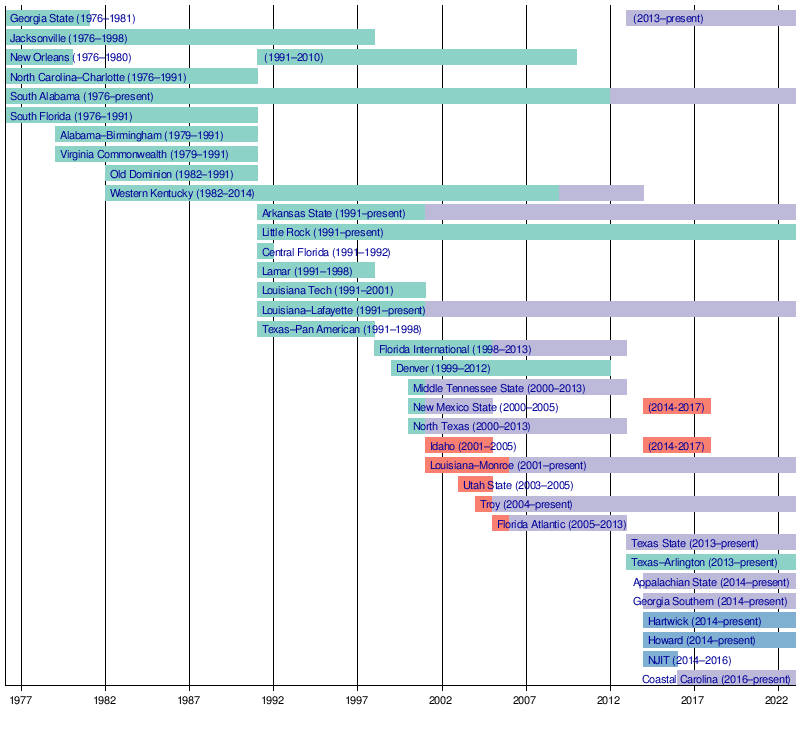 On October 12, 2011, ESPN reported that Wright Waters would retire, effective July 1, 2012.[17] On February 15, 2012, Karl Benson was hired as the new commissioner of the Sun Belt, after having been the commissioner of the Western Athletic Conference for 17 years. Waters would later move his departure date to March 15, allowing Benson to take over at that time.[3]

The following current Sun Belt members have won NCAA Division I team championships prior to joining the conference:

Starting in the 2018 NCAA Division I FBS Season, the Sun Belt Conference will host a Conference Football Championship Game.[22]