Captain Joseph Henderson (September 9, 1826 - October 7, 1890) was an early American harbor pilot who guided large vessels in and out of the New York harbor. He was a legendary figure in the 1880s, well known for being one of the oldest and wealthiest of the Sandy Hook Pilots,[1] which operated in what is now the Port of New York and New Jersey. He was recognized to all the large steamship owners as one of the most experienced and trustworthy New York pilots.

Joseph Henderson was born in Charleston, South Carolina.[2] According to the 1880 Federal Census, Henderson's father and mother were born in South Carolina. At sixteen (1842), Henderson left Charleston to find passage to New York as a cabin boy on a ship traveling to New York City. It was written in the New York Herald newspaper that "some men on South street remember him in 1845 as a pilot of some standing even then."[3] 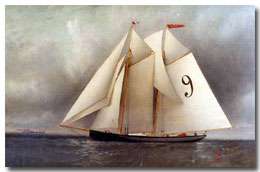 Henderson was a notable Sandy Hook pilot in the New York Harbor and along the Atlantic Coast during the American Civil War. South Street (Manhattan) is a street in New York City that was the center of the city's shipping industry. When Henderson was twenty (1846), he took out his first pilot papers with the Board of Commissioners of Pilots of the state of New York. He became adept in all branches of piloting.[5]

Henderson was listed in the 1848 Doggett's New York City directory as a seaman at 325 Front Street, New York City. He owned several pilot ships in the Sandy Hook service. By the age of twenty-one, he was captain of his own Schooner and a New York and Sandy Hook pilot. He spent over 45 years as a New York pilot and was in more boat accidents than any other pilots.

On September 13, 1853, Henderson was listed as one of the pilots and owners of the pilot boat Elwood Walter, No. 7, belonging to the Merchant Pilot Association.[6] The pilot boat was named after the president of the Mercantile Insurance Company, and was built by Mr. Edward T. Williams, of Greenpoint, Brooklyn.[7]

On December 17, 1856, Henderson was listed a being a captain for the pilot boat, the USS G. W. Blunt (1861). It was on this ship that he was said to have fallen from the masthead. On January 21, 1857, Henderson was listed as being on the George W. Blunt, No. 11 anchored at Coney Island, hemmed in by the ice. A snowstorm was reported in Brooklyn and there were reports of shipwrecks on the cost and loss of life due to a winter storm.[8]

During the Civil War, Henderson was a pilot on the transports USS Arago (1861) and USS Fulton (1862), running from Newport News, Virginia to Port Royal, South Carolina.[9] The author, Charles Edward Russell, wrote about Henderson and the Sandy Hook men during the Civil War.

Russell said: “In 1862 he was snapped up by the Federal Government to do pilot work on the southern sounds, with which, it is said, he had some yourthful acqaintance. His work for the Government was so valuable, ingenious, and efficient that he received not only thanks but unusual reward in bankable funds. Among the valuable services performed by the Sandy Hook men in that contest was the guiding of naval vessels through the intricate channels of southern waters, conspicuously Albemarle, North Carolina and Pamlico Sound.”[10]

The William Bell was built in Greenpoint, Long Island, N. Y. in the year 1863-64 by Edward F. Williams for Joseph Henderson, William Anderson, John Van Dusen, and James Callahan.[11] On August 11, 1864, the William Bell ventured too far out to sea and was captured and burned by the Confederate raiding steamer the CSS Tallahassee.[12]

In December 1869, Henderson offered his services to the master and owners, to pilot a steam vessel Tybee out of the port of New York, but they refused to employ him. They proceeded to sea without having on board any pilot of the port. A judgment wad made in the district court of New York City in favor of Joseph Henderson for thirty-eight dollars and eighteen cents, besides costs for fees for pilotage.[13]

On October 28, 1872, Henderson of the New York pilot boat "Pet, No. 9", sighted the brig Emily. The crew came on board the pilot boat, which lay by the brig until 7 PM, at witch time the Emily capsized. It was not until the next day that the crewmembers were transferred to the steamship Italy and brought to the New York port. On November 5, 1872, Henderson spoke at a meeting of the Board of Commissioners of Pilots about how he and his pilot boat Pet, No. 9, rescued the crew of the brig Emily.[14]

On February 3, 1877, an article from the Spirit of the Times newspaper wrote about Henderson and the pilot-boat Pet. The article said "This week, in connection with a picture of the pilot-boat Pet, Captain Joseph Henderson, we give a brief sketch, the object of which is to explain how the business of these craft is conducted in the port of New York."[15]

In 1883, Henderson was called upon as an expert seaman to determine the height of the water span of the Brooklyn Bridge.[16]

On February 17, 1883, Henderson, Van Deusen, Anderson, and Callahan petitioned the United States for compensation of their loss of the pilot boat William Bell during the Civil War. Henderson had to testify to his ownership and status as a Sandy Hook pilot during to the Court of Commissioners of Alabama Claims. On June 5, 1883, Henderson was compensated for $6,170.31, as he owned 5/16 share in the William Bell.[17]

On June 16, 1885, Henderson was selected to escort the French steamer Isère, which carried the Statue of Liberty into the New York Harbor to Bedloe's Island. Pilot Boat Pet No. 9 was sighted and Pilot Henderson was taken on board. His appearance on the ship was printed in several New York newspapers.[18] People lined the docks and boats went to sea to welcome the Isère.[19]

On May 8, 1887, Henderson was mentioned as a pilot on the steamship Martello in the United States Supreme Court case regarding a collision between the American barkentine Freda A. Willey and the British steamship Martello near the Sandy Hook Lighthouse. The suit said "The Martello was at fault for an excessive rate of speed in fog and was solely responsible for the collision." It went on to say that "Henderson has been a New York and Sandy Hook pilot for nearly forty-two years." [20]

In 1888, Henderson was on board the pilot boat '"America, No. 21 during the Great Blizzard of 1888, when the vessel rode out the storm off Shinnecock Light. On November 20, 1889, Henderson was commander of the pilot boat Pet, No. 9, which was lost in the Newport, Rhode Island harbor. "She dragged her anchor near Mackerel Cove, Rhode Island and drove ashore, proving a total loss. The agile Henderson escaped with his life."[21]

On August 13, 1890, Henderson took the White Line steamer SS Teutonic (1889) to sea on her first westward race across the Atlantic with the steamship SS City of New York. The race ended in victory for the Teutonic. The race from Queenstown harbor to Sanddy Hook, took 5 days and nineteen hours.[22] On August 21, 1890, Henderson was listed again as the pilot on the liner Teutonic, which was reported as racing against the steamship City of New York.[23]

On October 4, 1890, Henderson left home in good health and sailed to Sandy Hook on board his pilot boat America, No. 21. He became ill and was brought home to New York. On October 8, Joseph Henderson died (64) at his family home in Brooklyn, New York. The Brooklyn Eagle newspaper carried a front-page article titled: "Captain Joseph Henderson Dead – An Old Pilot and a Long Resident of Brooklyn Passes Away".[26] Henderson was buried in the historic Green-Wood Cemetery. The Evening World newspaper said, “He was one of the oldest and best known of the Sandy Hook crew. The flag on the New York Sandy Hook pilots’ building, at 20 State Street, hung at half-mast this morning in respect to the memory of Capt. Joseph Henderson, one of the oldest pilots in the service, who died at his home, 633 Willoughby avenue, Brooklyn, yesterday of peritonitis.”[9] Henderson was a prominent freemason and was a member of Hill Grove Lodge No. 540 in Brooklyn, New York. Members of the lodge were summoned to attend the funeral services.

In 1929, Charles Edward Russell published the book, "From Sandy Hook to 62°", which is about the Sandy Hook Pilots including references to Henderson.[27]

In the 1932, the St. Matthew’s Church listed in their Easter Church bulletin, that a Communion Service was given in memory of "Captain Joseph Henderson".[28]