This article is about a geographical landform in New Jersey. For other uses, see Sandy Hook (disambiguation). 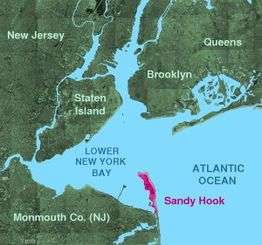 Sandy Hook is a barrier spit in Middletown Township,[3] Monmouth County, New Jersey, United States. The barrier spit, approximately 6 miles (9.7 km) in length and varying from 0.1 to 1.0 mile (0.16 to 1.61 km) wide, is located at the north end of the Jersey Shore. It encloses the southern entrance of Lower New York Bay south of New York City, protecting it from the open waters of the Atlantic Ocean to the east. The Dutch called the area "Sant Hoek", with the English "Hook" deriving from the Dutch "Hoek" (corner, angle), meaning "spit of land".[4]

Most of Sandy Hook is currently owned and managed by the National Park Service as the Sandy Hook Unit of Gateway National Recreation Area.

Geologically, Sandy Hook is a large sand spit or barrier spit, the extension of a barrier peninsula along the coast of New Jersey, separated from the mainland by the estuary of the Shrewsbury River. On its western side, the peninsula encloses Sandy Hook Bay, a triangular arm of Raritan Bay. The 2,044-acre (8.27 km2) peninsula was discovered by Henry Hudson,[5] and, historically, Sandy Hook has been a convenient anchorage for ships before proceeding into Upper New York Harbor.

Sandy Hook is part of Middletown Township, although not contiguous with the rest of the Township. Because the peninsula is a federal reservation, this technicality is essentially moot. The community of Highlands overlooks the southern part of the hook. 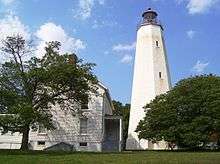 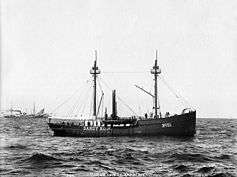 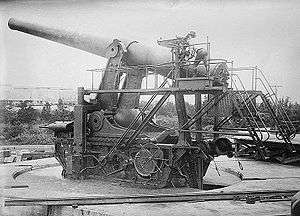 Sandy Hook is owned by the federal government. Most of it is managed by the National Park Service as the Sandy Hook Unit of Gateway National Recreation Area. The eastern shoreline consists of public beaches: North Beach, Gunnison Beach, and South Beach. The southern part of the spit consists of public beaches, fishing areas, and the SeaGull's Nest, a seafood restaurant operated by a concessionaire. The peninsula's ocean-facing beaches are considered among the finest in New Jersey and are a popular destination for recreation in summer when seasonal ferries[6] bring beachgoers. Gunnison Beach is one of the largest clothing optional beaches on the East Coast.[7][8]

There is a vocational school that was located at the tip of Sandy Hook called M.A.S.T. or The Marine Academy of Science and Technology. The school was destroyed by Hurricane Sandy in 2012, and rebuilt the subsequent year.

Sandy Hook Lighthouse is located within the fort grounds, as is the Marine Academy of Science and Technology (MAST), a magnet high school, part of the Monmouth County Vocational School District. At the entrance to Fort Hancock is Guardian Park, a plaza dominated by two Nike missiles. Some of the buildings of Fort Hancock are off-limits because their structural integrity is dubious. A controversial proposal was recently accepted to allow adaptive reuse of some of the buildings in Fort Hancock for private profit, but the developer was unable to obtain financing.

The defunct U.S. Army post Fort Hancock at the north end of the peninsula is open to the public. The Sandy Hook Proving Ground was used by for many years—beginning after the Civil War until 1919, when the facility was moved to Aberdeen, Maryland—and was later the site of a Nike missile defense installation. The Sandy Hook Nike station is one of a very few stations that are still intact. Almost all of the fort's gun batteries are off limits to the public due to their hazardous condition. The exceptions to this are Battery Potter and Battery Gunnison. Battery Potter is open frequently for tours on the weekends, as well as Battery Gunnison which is being restored by volunteers and has two M-1900 six-inch (152 mm) cannon installed; the weapons were placed there in 1976. Guided tours show visitors a Nike missile, the missile firing platforms, and a radar station with 1960s-era computers.

North of Fort Hancock on the western part of the "hook" is an active station of the United States Coast Guard. This is one of the original Life Saving Stations built in 1848 at a site "on bay side, one-half mile south of point of Hook." The site was changed several times through the years due to a change in land or at the request of the War Department, which owned the land.[9] This area is administered by the Department of Homeland Security and is off-limits to the general public. 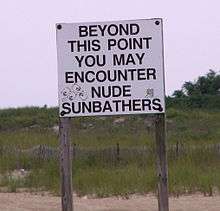 Among the many beaches on Sandy Hook, Gunnison Beach is clothing optional. 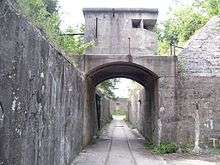 Part of a mortar battery installation near Sandy Hook Light

The beaches along the Atlantic shore of Sandy Hook—North Beach, Gunnison Beach and South Beach—feature parking lots, life guards, rest rooms and snack bars, and do not permit animals until after Labor Day. Gunnison is clothing optional.[5] In contrast the western shore includes vast acres of sand and trails without life guards or rest rooms. These stretches are favored by cyclists and kite surfers, and leashed dogs are permitted.

Accommodations near Sandy Hook include bed and breakfasts such as the Sandy Hook Cottage and Seascape Manor, as well as Grand Lady by the Sea, and Nauvoo at Sandy Hook, which are all located in Highlands. Dining options have changed dreastically since Superstorm Sandy, which destroyed the island's only eating location, the Sea Gulls' Nest Deck Restaurant. On the island itself, various food trucks can be found and nearby off-island is the landmark Bahr's Landing, Moby's and Something Fishy.[5]

Local activities include the Sandy Hook All Woman Lifeguard Tournament in July, boat rentals for fishing, parties and tours, and trails for biking, rollerblading, and walking. The Henry Hudson Trail, which stretches nine miles (14 km) from Aberdeen to Atlantic Highlands and is wheelchair accessible.[5]

The only road that connects to Sandy Hook is Route 36. A road through the peninsula branches from Route 36 at the northern end of Sea Bright. The Highlands-Sea Bright Bridge crosses the Shrewsbury River and carries the road traffic of Route 36 from Highlands in the west to Sea Bright in the east, at the entrance to Sandy Hook.