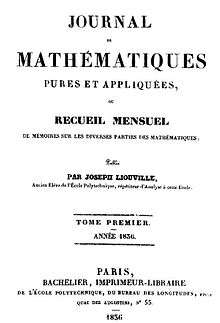 Besides his academic achievements, he was very talented in organisational matters. Liouville founded the Journal de Mathématiques Pures et Appliquées which retains its high reputation up to today, in order to promote other mathematicians' work. He was the first to read, and to recognize, the importance of the unpublished work of Évariste Galois which appeared in his journal in 1846. Liouville was also involved in politics for some time, and he became a member of the Constituting Assembly in 1848. However, after his defeat in the legislative elections in 1849, he turned away from politics.

Liouville worked in a number of different fields in mathematics, including number theory, complex analysis, differential geometry and topology, but also mathematical physics and even astronomy. He is remembered particularly for Liouville's theorem, a nowadays rather basic result in complex analysis. In number theory, he was the first to prove the existence of transcendental numbers by a construction using continued fractions (Liouville numbers). In mathematical physics, Liouville made two fundamental contributions: the Sturm–Liouville theory, which was joint work with Charles François Sturm, and is now a standard procedure to solve certain types of integral equations by developing into eigenfunctions, and the fact (also known as Liouville's theorem) that time evolution is measure preserving for a Hamiltonian system. In Hamiltonian dynamics, Liouville also introduced the notion of action-angle variables as a description of completely integrable systems. The modern formulation of this is sometimes called the Liouville-Arnold theorem, and the underlying concept of integrability is referred to as Liouville integrability.

In 1851, he was elected a foreign member of the Royal Swedish Academy of Sciences.

The crater Liouville on the Moon is named after him. So is the Liouville function, an important function in number theory.