Siméon Denis Poisson (French: [si.me.ɔ̃ də.ni pwa.sɔ̃]; 21 June 1781 – 25 April 1840), was a French mathematician, geometer, and physicist. He obtained many important results, but within the elite Académie des Sciences he also was the final leading opponent of the wave theory of light and was proven wrong on that matter by Augustin-Jean Fresnel.

Poisson was born in Pithiviers, Loiret, the son of soldier Siméon Poisson.

In 1798, he entered the École Polytechnique in Paris as first in his year, and immediately began to attract the notice of the professors of the school, who left him free to make his own decisions as to what he would study. In 1800, less than two years after his entry, he published two memoirs, one on Étienne Bézout's method of elimination, the other on the number of integrals of a finite difference equation. The latter was examined by Sylvestre-François Lacroix and Adrien-Marie Legendre, who recommended that it should be published in the Recueil des savants étrangers, an unprecedented honour for a youth of eighteen. This success at once procured entry for Poisson into scientific circles. Joseph Louis Lagrange, whose lectures on the theory of functions he attended at the École Polytechnique, recognized his talent early on, and became his friend (the Mathematics Genealogy Project lists Lagrange as his advisor, but this may be an approximation); while Pierre-Simon Laplace, in whose footsteps Poisson followed, regarded him almost as his son. The rest of his career, till his death in Sceaux near Paris, was nearly occupied by the composition and publication of his many works and in fulfilling the duties of the numerous educational positions to which he was successively appointed.

Immediately after finishing his studies at the École Polytechnique, he was appointed répétiteur (teaching assistant) there, a position which he had occupied as an amateur while still a pupil in the school; for his schoolmates had made a custom of visiting him in his room after an unusually difficult lecture to hear him repeat and explain it. He was made deputy professor (professeur suppléant) in 1802, and, in 1806 full professor succeeding Jean Baptiste Joseph Fourier, whom Napoleon had sent to Grenoble. In 1808 he became astronomer to the Bureau des Longitudes; and when the Faculté des sciences de Paris was instituted in 1809 he was appointed professor of rational mechanics (professeur de mécanique rationelle). He went on to become a member of the Institute in 1812, examiner at the military school (École Militaire) at Saint-Cyr in 1815, graduation examiner at the École Polytechnique in 1816, councillor of the university in 1820, and geometer to the Bureau des Longitudes succeeding Pierre-Simon Laplace in 1827.

In 1817, he married Nancy de Bardi and with her he had four children. His father, whose early experiences had led him to hate aristocrats, bred him in the stern creed of the First Republic. Throughout the Revolution, the Empire, and the following restoration, Poisson was not interested in politics, concentrating on mathematics. He was appointed to the dignity of baron in 1821; but he neither took out the diploma or used the title. In March 1818, he was elected a Fellow of the Royal Society,[1] in 1822 a Foreign Honorary Member of the American Academy of Arts and Sciences,[2] and in 1823 a foreign member of the Royal Swedish Academy of Sciences. The revolution of July 1830 threatened him with the loss of all his honours; but this disgrace to the government of Louis-Philippe was adroitly averted by François Jean Dominique Arago, who, while his "revocation" was being plotted by the council of ministers, procured him an invitation to dine at the Palais-Royal, where he was openly and effusively received by the citizen king, who "remembered" him. After this, of course, his degradation was impossible, and seven years later he was made a peer of France, not for political reasons, but as a representative of French science.

As a teacher of mathematics Poisson is said to have been extraordinarily successful, as might have been expected from his early promise as a répétiteur at the École Polytechnique. As a scientific worker, his productivity has rarely if ever been equalled. Notwithstanding his many official duties, he found time to publish more than three hundred works, several of them extensive treatises, and many of them memoirs dealing with the most abstruse branches of pure mathematics, applied mathematics, mathematical physics, and rational mechanics. (Arago attributed to him the quote, "Life is good for only two things: doing mathematics and teaching it."[3])

A list of Poisson's works, drawn up by himself, is given at the end of Arago's biography. All that is possible is a brief mention of the more important ones. It was in the application of mathematics to physics that his greatest services to science were performed. Perhaps the most original, and certainly the most permanent in their influence, were his memoirs on the theory of electricity and magnetism, which virtually created a new branch of mathematical physics.

Next (or in the opinion of some, first) in importance stand the memoirs on celestial mechanics, in which he proved himself a worthy successor to Pierre-Simon Laplace. The most important of these are his memoirs Sur les inégalités séculaires des moyens mouvements des planètes, Sur la variation des constantes arbitraires dans les questions de mécanique, both published in the Journal of the École Polytechnique (1809); Sur la libration de la lune, in Connaissance des temps (1821), etc.; and Sur le mouvement de la terre autour de son centre de gravité, in Mémoires de l'Académie (1827), etc. In the first of these memoirs, Poisson discusses the famous question of the stability of the planetary orbits, which had already been settled by Lagrange to the first degree of approximation for the disturbing forces. Poisson showed that the result could be extended to a second approximation, and thus made an important advance in planetary theory. The memoir is remarkable inasmuch as it roused Lagrange, after an interval of inactivity, to compose in his old age one of the greatest of his memoirs, entitled Sur la théorie des variations des éléments des planètes, et en particulier des variations des grands axes de leurs orbites. So highly did he think of Poisson's memoir that he made a copy of it with his own hand, which was found among his papers after his death. Poisson made important contributions to the theory of attraction.

His name is one of the 72 names inscribed on the Eiffel Tower. 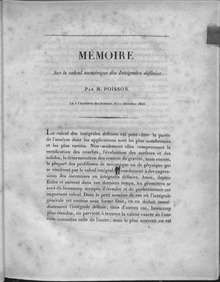 today named after him Poisson's equation or the potential theory equation, was first published in the Bulletin de la société philomatique (1813). If ρ = 0, we get Laplace's equation:

In 1812 Poisson discovered that Laplace's equation is valid only outside of a solid. A rigorous proof for masses with variable density was first given by Carl Friedrich Gauss in 1839. Both equations have their equivalents in vector algebra. Poisson's equation for the divergence of the gradient of a scalar field, φ in 3-dimensional space is:

Consider for instance Poisson's equation for surface electrical potential, Ψ as a function of the density of electric charge, ρe at a particular point:

The distribution of a charge in a fluid is unknown and we have to use the Poisson–Boltzmann equation:

which in most cases cannot be solved analytically. In polar coordinates the Poisson–Boltzmann equation is:

which also cannot be solved analytically. If a field, φ is not scalar, the Poisson equation is valid, as can be for example in 4-dimensional Minkowski space:

If ρ(x, y, z) is a continuous function and if for r→ ∞ (or if a point 'moves' to infinity) a function φ goes to 0 fast enough, a solution of Poisson's equation is the Newtonian potential of a function ρ(x, y, z):

where r is a distance between a volume element dv and a point M. The integration runs over the whole space.

Another "Poisson's integral" is the solution for the Green function for Laplace's equation with Dirichlet condition over a circular disk:

φ is a boundary condition holding on the disk's boundary.

is the distance of a point (ξ, η, ζ) from the center of a sphere,

Poisson's integral now has a form:

In pure mathematics, his most important works were his series of memoirs on definite integrals and his discussion of Fourier series, the latter paving the way for the classic researches of Peter Gustav Lejeune Dirichlet and Bernhard Riemann on the same subject; these are to be found in the Journal of the École Polytechnique from 1813 to 1823, and in the Memoirs de l'Académie for 1823. He also studied Fourier integrals. We may also mention his essay on the calculus of variations (Mem. de l'acad., 1833), and his memoirs on the probability of the mean results of observations (Connaiss. d. temps, 1827, &c). The Poisson distribution in probability theory is named after him.

In his Traité de mécanique (2 vols. 8vo, 1811 and 1833), which was written in the style of Laplace and Lagrange and was long a standard work, he showed many novelties such as an explicit usage of momenta:

which influenced the work of Hamilton and Jacobi.

Besides his many memoirs, Poisson published a number of treatises, most of which were intended to form part of a great work on mathematical physics, which he did not live to complete. Among these may be mentioned

A translation of Poisson's Treatise on Mechanics was published in London in 1842.

In 1815 Poisson studied integrations along paths in the complex plane. In 1831 he derived the Navier–Stokes equations independently of Claude-Louis Navier.

Flawed views on the wave theory of light

Poisson showed surprising hubris on the wave theory of light. He was a member of the academic "old guard" at the Académie royale des sciences de l'Institut de France, who were staunch believers in the particle theory of light and were alarmed at the wave theory of light's increasing acceptance. In 1818, the Académie set the topic of their prize as diffraction, being certain that a particle theorist would win it. Poisson, relying on intuition rather than mathematics or scientific experiment, ridiculed participant and civil engineer Augustin-Jean Fresnel when he submitted a thesis explaining diffraction derived from analysis of both the Huygens–Fresnel principle and Young's double slit experiment.[4]

Poisson studied Fresnel's theory in detail and looked for a way to prove it wrong. Poisson thought that he had found a flaw when he demonstrated that Fresnel's theory predicts an on-axis bright spot in the shadow of a circular obstacle blocking a point source of light, where the particle-theory of light predicts complete darkness. Fresnel's theory could not be true, Poisson declared, surely this result was absurd. (The Poisson spot is not easily observed in everyday situations, because most everyday sources of light are not good point sources.)

The head of the committee, Dominique-François-Jean Arago, who incidentally later became Prime Minister of France, was more open-minded than Poisson and decided to perform the experiment. He molded a 2mm metallic disk to a glass plate with wax.[5] To everyone's surprise he observed the predicted bright spot, which convinced most scientists of the wave-nature of light. Fresnel won the competition, much to Poisson's chagrin.

After that, the corpuscular theory of light was vanquished, not to be heard of again until in a very different form, the 20th century revived it as the newly developed wave-particle duality. Arago later noted that the diffraction bright spot (which later became known as both the Arago spot and the Poisson spot) had already been observed by Joseph-Nicolas Delisle[5] and Giacomo F. Maraldi[6] a century earlier.