This article is about the word "kairos". For the entrepreneurship organization, see Kairos Society. For the Christian retreat, see Kairos (retreat). For the Greek personification of opportunity, see Caerus. For other uses, see Kairos (disambiguation). 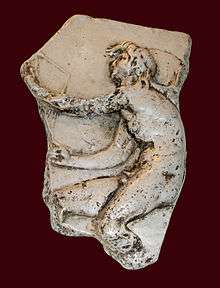 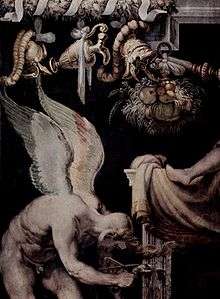 Kairos as portrayed in a 16th-century fresco by Francesco Salviati

Kairos (καιρός) is an ancient Greek word meaning the right or opportune moment (the 'supreme moment'). The ancient Greeks had two words for time: Greek: χρόνος (chronos) and kairos. While the former refers to chronological or sequential time, the latter signifies a period or season, a moment of indeterminate time in which an event of significance happens. What is happening when referring to kairos depends on who is using the word. While chronos is quantitative, kairos has a qualitative, permanent nature.[1] Kairos also means weather in modern Greek. The plural, καιροί (kairoi (ancient and modern Greek)) means the times.

In rhetoric, kairos is "a passing instant when an opening appears which must be driven through with force if success is to be achieved."[3]

Kairos was central to the Sophists, who stressed the rhetor's ability to adapt to and take advantage of changing, contingent circumstances. In Panathenaicus, Isocrates writes that educated people are those “who manage well the circumstances which they encounter day by day, and who possess a judgment which is accurate in meeting occasions as they arise and rarely misses the expedient course of action".

Kairos is also very important in Aristotle's scheme of rhetoric. Kairos is, for Aristotle, the time and space context in which the proof will be delivered. Kairos stands alongside other contextual elements of rhetoric: The Audience, which is the psychological and emotional makeup of those who will receive the proof; and To Prepon, which is the style with which the orator clothes the proof.

In Ancient Greece, "kairos" was utilized by both of the two main schools of thought in the field of rhetoric. The competing schools were that of the Sophists, and that of their opposition, led by individuals such as Aristotle and Plato. Sophism approached rhetoric as an art form. Members of the school would travel around Greece teaching citizens about the art of rhetoric and successful discourse. In his article "Toward a Sophistic Definition of Rhetoric", John Poulakos defines rhetoric from a Sophistic perspective as follows: "Rhetoric is the art which seeks to capture in opportune moments that which is appropriate and attempts to suggest that which is possible."[4] Aristotle and Plato, on the other hand, viewed Sophistic rhetoric as a tool used to manipulate others, and criticized those who taught it.

Kairos fits into the Sophistic scheme of rhetoric in conjunction with the ideas of prepon and dynaton. These two terms combined with kairos are their keys to successful rhetoric. As stated by Poulakos, Prepon deals with the notion that "what is said must conform to both audience and occasion."[5] Dynaton has to do with the idea of the possible, or what the speaker is attempting to convince the audience of. Kairos in the Sophistic context is based on the thought that speech must happen at a certain time in order for it to be most effective. If rhetoric is to be meaningful and successful, it must be presented at the right moment, or else it will not have the same impact on the members of the audience.

In his article "Critical-Rhetorical Ethnography: Rethinking the Place and Process of Rhetoric", Aaron Hess submits a definition of kairos for the present day that bridges the two classical applications. Hess addresses Poulakos’s view that, “In short, kairos dictates that what is said must be said at the right time.”[7] He also suggests that in addition to timeliness kairos considers appropriateness. According to Hess, kairos can either be understood as, "the decorum or propriety of any given moment and speech act, implying a reliance on the given or known" or as, "the opportune, spontaneous, or timely."[8] Although these two ideas of kairos might seem conflicting, Hess says that they offer a more extensive understanding of the term. Furthermore, they encourage creativity, which is necessary to adapt to unforeseen obstacles and opinions that can alter the opportune or appropriate moment, i.e. kairos. Being able to recognize the propriety of a situation while having the ability to adapt one’s rhetoric allows taking advantage of kairos to be successful. Hess’s updated definition of kairos concludes that along with taking advantage of the timeliness and appropriateness of a situation, the term also implies being knowledgeable of and involved in the environment where the situation is taking place in order to benefit fully from seizing the opportune moment.

Hess's somewhat conflicting perspective on kairos is exemplified by the disagreement between Lloyd F. Bitzer and Richard E. Vatz about the rhetorical situation. Bitzer argues that rhetorical situations exist independent of human perspective; a situation invites discourse. He discusses the feeling of a missed opportunity to speak (kairos) and the tendency to later create a speech in response to that unseized moment.[9] However, Vatz counters Bitzer's view by claiming that a situation is made rhetorical by the perception of its interpreter and the way which they choose to respond to it, whether with discourse or not. It is the rhetor's responsibility to give an event meaning through linguistic depiction.[10] Bitzer's and Vatz's perspectives add depth to Hess's ideas that kairos is concerned with both timeliness and appropriateness. On one hand, Bitzer's argument supports Hess's claim that kairos is spontaneous, and one must be able to recognize the situation as opportune in order to take advantage of it. On the other hand, Vatz's idea that the rhetor is responsible reinforces Hess's suggestion of the need to be knowledgeable and involved in the surrounding environment in order to fully profit from the situation.

In the Eastern Orthodox and Eastern Catholic churches, before the Divine Liturgy begins, the Deacon exclaims to the Priest, «Καιρός του ποιήσα τω Κυρίω'», Kairos tou poiesai to Kyrio, " ("It is time [kairos] for the Lord to act"); indicating that the time of the Liturgy is an intersection with Eternity.

In The Interpretation of History, neo-orthodox Lutheran theologian Paul Tillich made prominent use of the term. For him, the kairoi are those crises in history (see Christian existentialism) which create an opportunity for, and indeed demand, an existential decision by the human subject - the coming of Christ being the prime example (compare Karl Barth's use of Geschichte as opposed to Historie). In the Kairos Document, an example of liberation theology in South Africa under apartheid, the term kairos is used to denote "the appointed time", "the crucial time" into which the document or text is spoken.