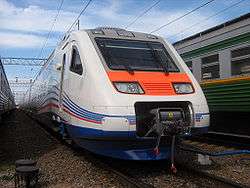 Oy Karelian Trains Ltd is a joint venture agreed on 23 November 2006 between Russian Railways (RZhD) and VR Group (Finnish Railways) to facilitate the operation of international express passenger rail services between Helsinki, Finland, and Saint Petersburg, Russia. Karelian Trains is registered in Helsinki; VR and RZhD both own 50% of the shares.[1] The services are branded as Allegro.[2]

Services were launched on 12 December 2010[3][4] using Alstom Pendolino trains ordered in September 2007.[5] Investments will also be made in infrastructure to enable higher speeds to be achieved.[3] Together, this has cut journey times between the two cities from the previous  5 1⁄2 hours to about 3 hours.[2] There are four daily train departures each direction, compared to two for the older service.[3] The daily night train Helsinki–Moscow will continue like before.[3]

During the first year of operation the service has had 280,000 passengers, far more than expected.[6]

The service between Helsinki and St. Petersburg is provided using four Alstom-built Pendolino trains similar in interior fitting and exterior appearance to the VR Class Sm3 Pendolino trains that have been operated by the VR since 1995.[5] The new trains, branded Allegro,[2] are dual voltage, capable of operating on VR's 25 kV AC and RZhD's 3 kV DC electrification systems.[5] The Allegro trains will be painted in a new livery inspired by the colours of the flags of Finland and Russia, with blue and red stripes on a white and silver background, and a blue undercarriage.[2][7]

This article is issued from Wikipedia - version of the 10/23/2015. The text is available under the Creative Commons Attribution/Share Alike but additional terms may apply for the media files.