Allegro is a high-speed train service between Helsinki, Finland, and St. Petersburg, Russia. The service started on 12 December 2010.[2][3] The aim is to reduce travel time between Helsinki and Saint Petersburg: before Allegro, the journey time was 5½ hours; currently it is 3 hours and 36 minutes[4] and there are plans to bring it down to 3 hours.[5] The name Allegro is a musical term for a quick tempo, thereby suggesting "high speed". 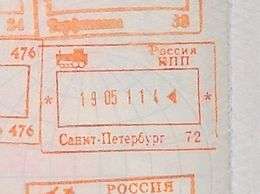 Russian passport stamp obtained while travelling on the Allegro

On board the train, each passenger is visited by Finnish passport control and customs officers, as well as their Russian counterparts. 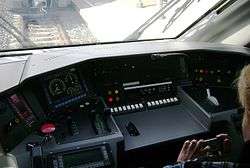 The Sm6 appears similar to VR's earlier Sm3 Pendolino series, but is based on the fourth generation[7] 'Pendolino Nuovo' or 'New Pendolino' designs and its construction differs from the Sm3 in many ways.[1]

The top speed of the train in passenger traffic is 220 km/h (140 mph) and the train can run at a speed of at least 200 km/h (120 mph) between Tikkurila and Luumäki and Vyborg and St. Petersburg after extensive rail works.[7] The aim is to reduce travel time between Helsinki and Saint Petersburg from 5½ hours to 3 hours.[5] The travel time as of 2012 was 3:36.[4]

The Sm6 is equipped to operate on both the Finnish and the Russian railway networks. The units have dual-voltage electrical equipment able to use both the Finnish 25 kV 50 Hz alternating current and the Russian 3 kV direct current electrification. The wheelsets are built to run at over 200 km/h (120 mph) speeds on both the Finnish 1,524 mm (5 ft) and the nominally slightly narrower Russian 1,520 mm (4 ft 11 27⁄32 in) gauge, and the doors are equipped with a retractable step to make boarding from both Finnish 550 mm (21.7 in) high and Russian 1,100 mm (43.3 in) high platforms easy. The units are equipped for both the Finnish and Russian railway technical systems, which differ substantially.[8]

On board the inaugural service were Finnish president Tarja Halonen and Russian prime minister Vladimir Putin.[9]