Kay Francis (January 13, 1905 – August 26, 1968) was an American stage and film actress.[1] After a brief period on Broadway in the late 1920s, she moved to film and achieved her greatest success between 1930 and 1936, when she was the number one female star at the Warner Brothers studio and the highest-paid American film actress.[2] Some of her film-related material and personal papers are available to scholars and researchers in the Wesleyan University Cinema Archives.[3]

Francis was born Katherine Edwina Gibbs in Oklahoma City, Oklahoma in 1905.[4] Her parents, Joseph Sprague Gibbs and his actress wife Katharine Clinton Francis, had been married in 1903; however, by the time their daughter was four, Joseph had left the family. Francis inherited her unusual height from her father, who stood 6 feet 4 inches, she was to become Hollywood's tallest leading lady (5 ft 9 in) in the 1930s.

While she never discouraged the assumption that her mother was the pioneering American businesswoman who established the "Katharine Gibbs" chain of vocational schools, Francis was actually raised in the hardscrabble theatrical circuit of the period. In reality, her mother had been born in Nova Scotia, Canada, and eventually became a moderately successful actress and singer under the stage name Katharine Clinton.

Young Kay was often out on the road with her mother, and attended Catholic schools when it was affordable, becoming a student at the Institute of the Holy Angels at age five.[5] After also attending Miss Fuller’s School for Young Ladies in Ossining, New York (1919) and the Cathedral School (1920), she enrolled at the Katharine Gibbs Secretarial School in New York City. At age 17, Kay became engaged to a well-to-do Pittsfield, Massachusetts man, James Dwight Francis. Their December 1922 marriage at New York's Saint Thomas Church ended in divorce.

In the spring of 1925, Francis went to Paris to get a divorce. While there, she was courted by a former Harvard athlete and member of the Boston Bar Association, Bill Gaston. Kay and Bill saw each other only on occasion; he was in Boston and Kay had decided to follow her mother’s footsteps and go on the stage in New York. She made her Broadway debut[6] as the Player Queen in a modern-dress version of Shakespeare's Hamlet in November 1925.[7] Francis claimed she got the part by “lying a lot, to the right people”. One of the “right” people was producer Stuart Walker, who hired Kay to join his Portmanteau Theatre Company, and she soon found herself commuting between Dayton, Indianapolis, and Cincinnati, playing wisecracking secretaries, saucy French floozies, walk-ons, bit parts, and heavies.

By February 1927, Francis returned to Broadway in the play Crime.[8] Sylvia Sidney, although a teenager at the time, had the lead in Crime but would later say that Kay stole the show.

After Kay's divorce from Gaston, she became engaged to a society playboy, Alan Ryan Jr. She promised Alan's family that she would not return to the stage – a promise that lasted only a few months before she was back on Broadway as an aviator in a Rachel Crothers play, Venus.[9]

Francis was to appear in only one other Broadway production, a play called Elmer the Great in 1928.[10] Written by Ring Lardner and produced by George M. Cohan, the play starred Walter Huston. He was so impressed by Francis that he encouraged her to take a screen test for the Paramount Pictures film Gentlemen of the Press (1929). Francis made this film and the Marx Brothers film The Cocoanuts (1929) at Paramount's Astoria Studios in Astoria, Queens, New York. 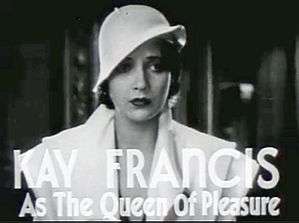 By that time, film studios had started their exodus from New York to California, and many Broadway actors had been enticed to travel west to Hollywood to make films, including Ann Harding, Aline MacMahon, Helen Twelvetrees, Barbara Stanwyck, Humphrey Bogart, and Leslie Howard. Francis, signed to a Paramount contract, also made the move, and created an immediate impression. She frequently costarred with William Powell and appeared in as many as six to eight movies a year, making a total of 21 films between 1929 and 1931.

Francis's career flourished in spite of a slight but distinctive speech impediment (she pronounced the letters "r" and "l" as "w") that gave rise to the nickname "Wavishing Kay Fwancis."

Francis' career at Paramount changed gears when Warner Bros. promised her star status at a better salary. She appeared in George Cukor's Girls About Town (1931) and Twenty-Four Hours (1931). After Francis' career skyrocketed at Warner Bros., she would return to Paramount for Ernst Lubitsch's Trouble in Paradise (1932).

In 1932, Warner Bros. persuaded both Francis and Powell to join the ranks of Warners stars, along with Ruth Chatterton. In exchange, Francis was given roles that allowed her a more sympathetic screen persona than had hitherto been the case—in her first three featured roles she had played a villainess. For example, in The False Madonna (1932), she played a jaded society woman nursing a terminally ill child who learns to appreciate the importance of hearth and home. On December 16, 1931, Francis and her co-stars opened the Paramount Theatre in Oakland, California with a gala preview screening of The False Madonna.

From 1932 through 1936, Francis was the queen of the Warners lot and increasingly her films were developed as star vehicles. By the mid-thirties, Francis was one of the highest-paid people in the United States. From the years 1930 to 1937, Francis appeared on the covers of 38 film magazines, the most for any adult performer and second only to Shirley Temple who appeared on 138 covers during that period.[11]

She had married writer-director John Meehan in New York, but soon after her arrival in Hollywood, she consummated an affair with actor and producer Kenneth MacKenna, whom she married in January 1931. When MacKenna's Hollywood career foundered, he found himself spending more time in New York, and they divorced in 1934.

She frequently played long-suffering heroines, in films such as I Found Stella Parish, Secrets of an Actress, and Comet Over Broadway, displaying to good advantage lavish wardrobes that, in some cases, were more memorable than the characters she played—a fact often emphasized by contemporary film reviewers. Francis' clotheshorse reputation often led Warners' producers to concentrate resources on lavish sets and costumes, designed to appeal to Depression-era female audiences and capitalize on her reputation as the epitome of chic, rather than on scripts.

Eventually, Francis herself became dissatisfied with these vehicles and began openly to feud with Warners, even threatening a lawsuit against them for inferior treatment. This in turn led to her demotion to programmers such as Women in the Wind (1939) and, in the same year, to the termination of her contract. 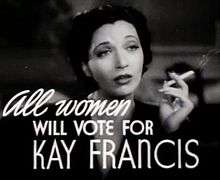 The Independent Theatre Owners Association paid for an advertisement in the Hollywood Reporter in May 1938 that included Francis, along with Greta Garbo, Joan Crawford, Fred Astaire, Mae West, Katharine Hepburn and others, on a list of stars dubbed "box office poison".[12] After her release from Warners, Francis was unable to secure another studio contract. Carole Lombard, one of the most popular stars of the late 1930s and early 1940s (and who had previously been a supporting player in Francis' 1931 film, Ladies' Man) tried to bolster Francis' career by insisting Francis be cast in In Name Only (1939). In this film, Francis had a supporting role to Lombard and Cary Grant, but recognized that the film offered her an opportunity to engage in some serious acting. After this, she moved to character and supporting parts, playing catty professional women – holding her own against Rosalind Russell in The Feminine Touch, for example – and mothers opposite rising young stars such as Deanna Durbin. Francis did have a lead role in the Bogart gangster film King of the Underworld, released in 1939.

With the start of World War II, Francis did volunteer work, including extensive war-zone touring, which was first chronicled in a book attributed to fellow volunteer Carole Landis, Four Jills in a Jeep, which became a popular 1944 film of the same name, with a cavalcade of stars and Martha Raye and Mitzi Mayfair joining Landis and Francis to fill out the complement of Jills.

Despite the success of Four Jills, the end of the war found Francis virtually unemployable in Hollywood. She signed a three-film contract with Poverty Row studio Monogram Pictures that gave her production credit as well as star billing. The results – the films Divorce, Wife Wanted, and Allotment Wives – had limited releases in 1945 and 1946. Francis spent the remainder of the 1940s on the stage, appearing with some success in State of the Union and touring in various productions of plays old and new, including one, Windy Hill, backed by former Warners colleague Ruth Chatterton. Declining health, aggravated by an accident in 1948 in which she was badly burned by a radiator, hastened her retirement from show business.

""My life? Well, I get up at a quarter to six in the morning if I'm going to wear an evening dress on camera. That sentence sounds a little ga-ga, doesn't it? But never mind, that's my life...As long as they pay me my salary, they can give me a broom and I'll sweep the stage. I don't give a damn. I want the money...When I die, I want to be cremated so that no sign of my existence is left on this earth. I can't wait to be forgotten." – From Kay Francis's private diaries, c. 1938.[13]

Francis married five times. Her diaries, preserved in an academic collection at Wesleyan University, paint a picture of a woman whose personal life was often in disarray.[13] She regularly socialized with homosexual men, one of whom, Anderson Lawler, was reportedly paid $10,000 by Warner Bros. to accompany her to Europe in 1934.[14]

In 1966, Francis was diagnosed with breast cancer and underwent a mastectomy, but the cancer had spread and proved fatal. Having no living immediate family members, Francis left more than $1,000,000 to Seeing Eye, Inc., which trained guide dogs for the blind. She died in 1968, aged 63, and her body was immediately cremated; her ashes were scattered.