Edna Mae Durbin (December 4, 1921 – c. April 20, 2013), known professionally as Deanna Durbin, was a Canadian actress and singer, who appeared in musical films in the 1930s and 1940s. With the technical skill and vocal range of a legitimate lyric soprano, she performed many styles from popular standards to operatic arias.

Durbin made her first film appearance with Judy Garland in Every Sunday (1936), and subsequently signed a contract with Universal Studios. Her success as the ideal teenaged daughter in films such as Three Smart Girls (1936) was credited with saving the studio from bankruptcy.[2] In 1938, at the age of 17, Durbin was awarded the Academy Juvenile Award.

As she matured, Durbin grew dissatisfied with the girl-next-door roles assigned to her, and attempted to portray a more womanly and sophisticated style. The film noir Christmas Holiday (1944) and the whodunit Lady on a Train (1945) were, however, not as well received as her musical comedies and romances had been. Durbin retired from acting and singing in 1949, and withdrew from public life. She married film producer-director Charles Henri David in 1950, and the couple moved to a farmhouse near Paris.

Edna Mae Durbin was born on December 4, 1921, at Grace Hospital in Winnipeg, Manitoba, the daughter of James Allen Durbin and his wife Ada (née Read), who were originally from Manchester, England. When she was an infant, her family moved from Winnipeg to Southern California, and her parents reportedly became United States citizens. At the age of one, Edna Mae was singing children's songs. By the time she was 10, her parents recognized that she had definite talent and enrolled her in voice lessons at the Ralph Thomas Academy.[3] Durbin soon became Thomas's prize pupil, and he showcased her talent at various local clubs and churches.[3]

In early 1935, Metro-Goldwyn-Mayer was planning a biographical film on the life of opera star Ernestine Schumann-Heink and was having difficulty finding an actress to play the young opera singer. MGM casting director Rufus LeMaire heard about a talented young soloist performing with the Ralph Thomas Academy and called her in for an audition. Durbin sang "Il Bacio" for the studio's vocal coach, who was stunned by her "mature soprano" voice. She sang the number again for Louis B. Mayer, who signed her to a six-month contract.[3]

Durbin made her first film appearance in the short Every Sunday (1936) with a young Judy Garland. The film helped to prove the pair, as studio executives had questioned the wisdom of casting two female singers together. Louis B. Mayer decided to keep both girls, but by the time that decision was made, Durbin's contract option had lapsed.[2]

Durbin signed a contract with Universal Studios, where she was given the professional name Deanna. She was 14 years old when she made her first feature-length film, Three Smart Girls (1936). When producer Joe Pasternak cast the film, he wanted to borrow Garland from MGM, but Garland was not available at the time. When Pasternak learned that Durbin was no longer with MGM, he cast her in the film instead. Three Smart Girls was a success and established Durbin as a star. With Pasternak producing for Universal, Durbin went on to star in a string of successful musical films, including One Hundred Men and a Girl (1937),[4] Mad About Music (1938), That Certain Age (1938), Three Smart Girls Grow Up (1939), and First Love (1939)—most of which were directed by Henry Koster.[5]

During the 1930s, Durbin continued to pursue singing projects. In 1936, she auditioned to provide the vocals for Snow White in Disney's animated film Snow White and the Seven Dwarfs, but was rejected by Walt Disney, who said the 15-year-old Durbin's voice was "too old" for the part.[6]

In late 1936, Cesar Sturani, the general music secretary of the Metropolitan Opera, offered Durbin an audition. She turned down his request because she felt she needed more singing lessons. Andrés de Segurola, who was the vocal coach working with Universal Studios—himself a former Metropolitan Opera singer—believed that Durbin was a potential opera star. De Segurola was commissioned to advise the Metropolitan Opera on her progress. Also in 1936, Durbin started a radio collaboration with Eddie Cantor which lasted until 1938, when her heavy workload for Universal forced her to quit her weekly appearances.[7]

The success of Durbin's films was reported to have saved Universal from bankruptcy.[2] In 1938, she received an Academy Juvenile Award with Mickey Rooney. Her producer, Joe Pasternak, said:

Deanna's genius had to be unfolded, but it was hers and hers alone, always has been, always will be, and no one can take credit for discovering her. You can't hide that kind of light under a bushel. You just can't, no matter how hard you try!

In the early 1940s, Durbin continued her success with It's a Date (1940), Spring Parade (1940), Nice Girl? (1941), and It Started with Eve (1941), her last film with Pasternak and director Henry Koster.[8] After Pasternak moved from Universal to MGM, Durbin was suspended between October 16, 1941 and early February 1942 for refusing to appear in They Lived Alone, which was scheduled to be directed by Koster. The project was canceled when Durbin and Universal settled their differences. In the agreement, Universal conceded to Durbin the approval of her directors, stories, and songs.[9]

Following the two sequels to her first film Three Smart Girls, Durbin issued a press release announcing that she was no longer inclined to participate in these team efforts and was now performing as a solo artist. The Three Smart Girls Join Up title was changed to Hers to Hold (1943). Joseph Cotten, who played alongside Durbin in the film, praised her integrity and character in his autobiography.[10] In 1943, Durbin took on a more sophisticated role in the World War II story of refugee children from China, The Amazing Mrs. Holliday. Additional adult roles followed, including the film noir Christmas Holiday (1944), directed by Robert Siodmak, and the whodunit Lady on a Train (1945).[8]

While these adult dramatic roles may have been more satisfying for Durbin, her fans preferred her in light musical confections such as Can't Help Singing (1944), her only Technicolor film, which featured some of the last melodies written by Jerome Kern plus lyrics by E. Y. Harburg. A musical comedy in a Western setting, this production was filmed mostly on location in southern Utah and co-starred Robert Paige.[11] 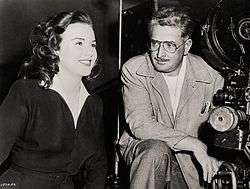 Deanna Durbin and cinematographer William H. Daniels on the set of For the Love of Mary (1948)

In 1946, Universal merged with two other companies to create Universal-International. The new regime discontinued much of Universal's familiar product and scheduled only a few musicals. She stayed on for another four pictures: I'll Be Yours (1947), Something in the Wind (1947), Up in Central Park (1948), and For the Love of Mary (1948).[8]

By 1948, however, her box-office clout began to diminish. In private life, Durbin continued to use her given name, Edna; salary figures printed annually by the Hollywood trade publications listed the actress as "Edna Mae Durbin, player". On August 22, 1948, two months after completing her final film, Universal-International announced a lawsuit which sought to collect from Durbin $87,083 in wages the studio had paid her in advance.[13] Durbin settled the complaint by agreeing to star in three more pictures, including one in Paris. The studio allowed Deanna's contract to expire on August 31, 1949, so the three films were never made.

Durbin married an assistant director, Vaughn Paul, in 1941; the couple divorced in 1943. Her second marriage, to film writer-producer-actor Felix Jackson in 1945, produced a daughter, Jessica Louise Jackson, but a divorce followed in 1949. In Paris on December 21, 1950, shortly after her 29th birthday, Durbin married Charles David, the producer-director of both French and American pictures who had guided her through Lady on a Train. Durbin and David raised two children: Jessica (from her second marriage to Jackson) and Peter (from her union with David).

Over the years, Durbin resisted numerous offers to perform again. In 1951, she was invited to play in London's West End production of Kiss Me Kate, and in the MGM film version of the same in 1953, and Sigmund Romberg's operetta The Student Prince in 1954, and was reportedly Alan Jay Lerner's first choice to portray Eliza Doolittle in the 1956 Broadway cast of My Fair Lady.

In 1983, film historian David Shipman was granted a rare interview by Durbin. In the interview, she steadfastly asserted her right to privacy and maintained it until the end of her life, declining to be profiled on websites.[17]

Durbin made it known that she did not like the Hollywood studio system. She emphasized that she never identified herself with the public image that the media created around her. She spoke of the Deanna "persona" in the third person, and considered the film character "Deanna Durbin" to be a byproduct of her youth and not her true identity.[18]

Durbin's husband of more than 48 years, Charles David, died in Paris on March 1, 1999. On April 30, 2013, a newsletter published by the Deanna Durbin Society reported that Durbin had died "in the past few days", quoting her son, Peter H. David, who thanked her admirers for respecting her privacy. No other details were given.[5] According to a family friend, Durbin died on or about April 20 in Neauphle-le-Château, France.[1][19]