Kecak (pronounced [ˈketʃaʔ], alternate spellings: Ketjak and Ketjack) is a form of Balinese dance and music drama that was developed in the 1930s in Bali, Indonesia. Since its creation, it has been performed primarily by men, with the very first women's kecak group starting in 2006.[1]

Also known as the Ramayana Monkey Chant, the piece, performed by a circle of at least 150 performers wearing checked cloth around their waists, percussively chanting "cak" and moving their hands and arms, depicts a battle from the Ramayana. The monkey-like Vanara led by Hanuman helped Prince Rama fight the evil King Ravana. Kecak has roots in sanghyang, a trance-inducing exorcism dance.[2]

Kecak was originally a trance ritual accompanied by male chorus. In the 1930s, Walter Spies, a German painter and musician, became deeply interested in the ritual while living in Bali. He adapted it as a drama, based on the Hindu Ramayana and including dance, intended for performance before Western tourist audiences.

This is an example of what James Clifford describes as part of the "modern art-culture system"[3] in which, "the West or the central power adopts, transforms, and consumes non-Western or peripheral cultural elements, while making 'art,' which was once embedded in the culture as a whole, into a separate entity."[4] Spies worked with Wayan Limbak, who popularized the dance by arranging for performances by Balinese groups touring internationally. These tours have helped make the kecak internationally known. 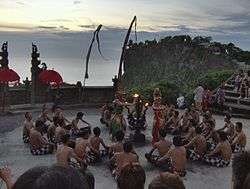 A kecak dance being performed at Uluwatu, in Bali 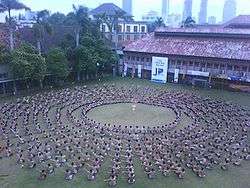 A kecak dance being performed at Kolese Kanisius, Jakarta

I Wayan Dibia, a performer, choreographer, and scholar, suggests, by contrast, that the Balinese were already developing this form when Spies arrived on the island.[5] For example, during the 1920s, the well-known dancer I Limbak had incorporated Baris movements into the cak leader role. "Spies liked this innovation," and he suggested that Limbak "devise a spectacle based on the Ramayana," accompanied by cak chorus rather than gamelan, as would have been usual.[2]