This article is about the city. For the modern country, see Sri Lanka. For other uses, see Lanka (disambiguation). 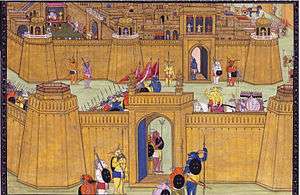 The golden abode of King Ravana

Lanka /ˈləŋkɑː/ is the name given in Hindu mythology to the island fortress capital of the legendary demon king Ravana in the epics of the Ramayana and the Mahabharata. The fortress was situated on a plateau between three mountain peaks known as the Trikuta Mountains. The ancient city of Lankapura is thought to have been burnt down by Hanuman. After its king, Ravana, was killed by Rama with the help of his brother Vibhishana, the latter was crowned king of Lankapura. The mythological site of Lankā is identified with Sri Lanka. His descendants were said to still rule the kingdom during the period of the Pandavas. According to the Mahabharata, the Pandava Sahadeva visited this kingdom during his southern military campaign for the rajasuya of Yudhishthira.

According to both the Ramayana and the Mahabharata, Lanka was originally ruled by a rakshasa named Sumali. According to Uttara Kanda, Lanka was originally built by the divine architect Vishwakarma for the gods, but was seized by the brothers, Malyavan, Sumali and Mali. The brothers ruled for years and invaded the heavens. After suffering a humiliating and disastrous defeat at the hands of Lord Vishnu, the brothers were too ashamed to return to Lanka. Kubera seized control of Lanka and established the Yaksha Kingdom and his capital was guarded by rakshasas. His half-brother Ravana, son of the sage Vishravaya and Sumali's daughter, fought with Kubera and took Lanka from him. Ravana ruled Lanka as king of the Rakshasa Kingdom. The battle in Lanka is depicted in a famous relief in the 12th-century Khmer temple of Angkor Wat. 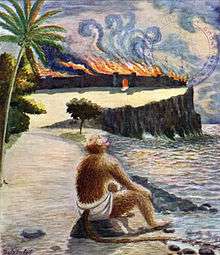 After Ravana's death, he was succeeded by his brother, Vibhishana.

The Lanka referred to in the still-extant Hindu Texts and the Ramayana (referred to as Ravana's Lanka), is considered to be a large island-country, situated in the Indian Ocean. The Ramayana clearly state that Ravana's Lanka was situated 100 Yojanas (roughly 1,300 km or 800 miles) away from mainland India.[1][2] Some scholars have interpreted the content of these texts to determine that Lanka was located at the point where the Prime-Meridian of India passes the Equator.[3][4] This island would therefore lie more than a hundred miles South-west of present-day country of Sri Lanka. The most original of all the existing versions of Valmiki's Ramayana also suggest the location of Ravana's Lanka to be in the western Indian Ocean. In fact it indicates that Lanka was in the midst of a series of large island-nations, submerged mountains, and sunken plateaus in the western part of the Indian Ocean.Valmiki's Ramayana[5]

Ravana's Lanka, and its capital Lankapuri, are described in a manner that seems superhuman even by modern-day standards. Ravana's central palace-complex (main citadel) was a massive collection of several edifices that reached over one yojana (8 miles or 12.88 kilometres) in height, one yojana in length, and half a yojana in breadth. The island had a large mountain range known as the Trikuta Mountain, atop which was situated Ravana's capital of Lanka, at the center of which in turn stood his citadel. [9][10][11]

References to Lanka in the Mahabharata

The son of Pandu, viz. Sahadeva, conquered the town of Sanjayanti and the country of the Pashandas and the Karanatakas by means of his messengers alone, and made all of them pay tributes to him. The hero brought under his subjection and exacted tributes from the Paundrayas (Pandyas?) and the Dravidas along with the Udrakeralas and the Andhras and the Talavanas, the Kalingas and the Ushtrakarnikas, and also the delightful city of Atavi and that of the Yavanas. And, He having arrived at the seashore, then dispatched with great assurance messengers unto the illustrious Vibhishana, the grandson of Pulastya and the ruler of Lanka (2:30).

Presence of the King of Lanka in Yudhishthira's Rajasuya

Lanka king is listed as present in the conclave of kings present in Pandava king Yudhishthira's Rajasuya sacrifice.

.. The Vangas and Angas and Paundras and Odras and Cholas and Dravidas and Cheras and Pandyas and Mushika and Andhakas, and the chiefs of many islands and countries on the seaboard as also of frontier states, including the rulers of the Sinhalas, the barbarous mlecchas, the natives of Lanka, and all the kings of the West by hundreds, and all the chiefs of the seacoast, and the kings of the Pahlavas and the Daradas and the various tribes of the Kiratas and Yavanas and Sakras and the Harahunas and Chinas and Tukharas and the Sindhavas and the Jagudas and the Ramathas and the Mundas and the inhabitants of the kingdom of women and the Tanganas and the Kekayas and the Malavas and the inhabitants of Kasmira ... (3:51).