Barges twice: A long cigar-shaped keelboat passing a "flatboat" on the Ohio River.

A keelboat is a riverine cargo-capable working boat, or a small- to mid-sized recreational sailing yacht. The boats in the first category have shallow structural keels, and are nearly flat-bottomed and often used leeboards if forced in open water, while modern recreational keelboats have prominent fixed fin keels, and considerable draft. The two terms may draw from cognate words with different final meaning. 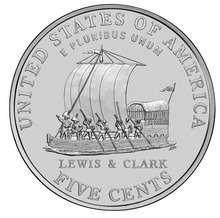 A Keel boat,[1] Keelboat,[1] or Keel-boat[2] is a type of usually long narrow cigar-shaped riverboat,[1] or unsheltered water barge which is sometimes also called a poleboat—that is built about a slight keel and is designed as a boat built for the navigation of rivers, shallow lakes, and sometimes canals that were commonly used in America including use in great numbers by settlers making their way west in the century-plus of wide-open western American frontiers.[1][2] They were also used extensively for transporting cargo to market, and for exploration and trading expeditions, for water transport was then most effective means to move bulky or heavy cargo.

Keelboats were similar to riverboats, but like other barges were unpowered and were typically controlled with oars or poles—usually the latter. Keelboats have been used for exploration, such as the Lewis and Clark Expedition, but were primarily used to transport cargo or settlers in the early 19th century. The process of moving a keelboat upriver was extremely difficult, though current dependent. Most of these keelboats were 50 to 80 feet (15 to 24 m) long and 15 feet (5 m) wide. They usually had a cabin in the middle, but were sometimes constructed with an open deck. Mike Fink is probably the most noted keelboater in history.

We stop the press to announce the arrival this morning of the steam-boat, REPUBLICAN, Toll, Master from the rapids of the Wabash. The Republican had in tow keel boats, "the Hoosier Lady" and "the Hoosier Boy," bringing freight to Lafayette, Messrs Taylor & Harter, Taylor & Li??? J. McCormick, J. B. Semans and Hunter, and for Messrs, Ewing of the Bridge at Logansport. This is the first arrival at Lafayette this year. We understand the Republican is going to try and ascend the Wabash at Logansport. If she is successful she be the first one that ever has been, and with entitlement to the premium, which we learn is been offered by General Tipton and other enterprising and worthy citizens of that first arrival. The Wabash is in steam boating condition, and we may experience several arrivals, in a few days.

The term keel was associated in Great Britain with three particular working boat types. The Norfolk Keel ancestor of the Norfolk Wherry, the Humber Keel and the Tyne Keel and their Keelmen. 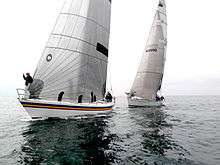 A yacht race in California

ISAF (International Sailing Federation) usage differentiates keelboats (including the 12-meter class) from generally larger yachts, despite overlap in the sizes of boats in the two classes. The Olympic Games uses keelboat to describe keeled boats with up to a three-man crew, as opposed to larger-crewed boats such as the 12-metre class.

In some countries yachts can also be differentiated from keelboats with the addition of a toilet or "head" as the term "keelboat" is in some places understood to mean a sailboat with a keel that is designed purely for recreational/racing purposes, while the term "yacht" describes a sailboat designed for overnight transport.