A flatboat is a rectangular flat-bottomed boat with [notes 1][1] square ends used to transport freight and passengers on inland waterways. The flatboat could be any size, but essentially it is large, sturdy tub with a hull that displaces water and so floats in the water. This differentiates the flatboat from the raft, which floats on the water.

A flatboat is almost always a one-way vessel, and is usually dismantled for lumber when it reaches its downstream destination.[notes 2] 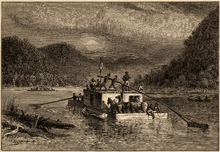 An Alfred Waud engraving showing persons traveling down a river by flatboat in the late 1800s.

The flatboat trade first began in 1781, with Pennsylvania farmer Jacob Yoder building the first flatboat at Old Redstone Fort on the Mononganhela River. Yoder shipped flour down the Mississippi River to the port of New Orleans. Other flatboats would follow this model, using the current of the river to propel them to New Orleans where their final product could be shipped overseas. Through the antebellum period, flatboats were one of the most important modes of shipping in the United States.[2]

The flatboat trade before the War of 1812 was less organized and less professional than during later times. Flatboats were generally built and piloted by the farmers whose crops they carried. They were limited to 20 feet (or approximately 6 meters) in width in order to successfully navigate the river but could range from 20 to 100 feet (or approximately 6 to 30 meters) in length. Flatboats could be built by unskilled farmers with limited tools and training making them an ideal mode of transport for isolated farmers living in the Old Northwest and the Upper South. Farmers could make the journey down the river after the harvest. The boats themselves were usually salvaged for lumber at New Orleans because they could not easily make the journey upriver. A boatman's return journey up the river was long and usually arduous. Passage on a (human-powered) keelboat was expensive and took weeks to make the journey up the Mississippi. Returning to northern reaches on foot required about three months.[3]

A flatboat itself was a serious investment for a Midwestern farmer. One generally cost about $75 to construct in 1800 (which was equivalent to $1,047.50 in 2015), but could carry up to $3,000 worth of goods.[4] These flatboats could typically be salvaged for around $16 in New Orleans, recouping some of the initial investment.[5] Flatboats carried a variety of goods to New Orleans including agricultural products like corn, wheat, potatoes, flour, hay, tobacco, cotton, and whiskey. Livestock such as chickens, cows, and pigs also made their way down the Mississippi in flatboats. Indiana native May Espey Warren recalled seeing a flatboat loaded with thousands of chickens headed down the Mississippi as a young girl. Other raw materials from the Old Northwest, like lumber and iron were also sent down the Mississippi to be sold in New Orleans.[6]

Many American cities along the river network of the Mississippi boomed due to the opportunities that the flatboat trade presented. New Orleans was the final destination for most flatboats headed down the Mississippi, and it was there that most of the goods were shipped on the oceans. Cincinnati, another major American trading city, first built itself on the flatboat trade. Its large sawmills produced most of the heavy lumber sent down on flatboats and it also became a large hub for the pork trade. Other cities, like Memphis, Tennessee and Brownsville, Pennsylvania became hubs for outfitting and supplying flatboat traders.[6]

The flatboat trade also led to a series of cultural and regional exchange between the North and the South. Many Northern flatboatmen had not seen the Southern United States before and rural farmers of the time generally did not travel. Flatboatmen brought tales of antebellum mansions lining the Mississippi and of the Cajun culture of lower Louisiana. They also brought back exotic foods such as bananas and animals such as parrots.[3] Abraham Lincoln served as a flatboatman twice in 1828 and 1831. It was on this journey that he first witnessed slavery and in New Orleans he also saw a slave auction firsthand. Lincoln would later recall these journeys as essential in shaping his personal views on slavery and the slave trade.[7]

The invention of the steamboat greatly reduced the costs of flatboat journeys and caused the trade to boom through the antebellum period. The steamboat, introduced to the Mississippi in the 1810s, greatly reduced the time of the return journey for flatboat crews. After reaching New Orleans, many flatboat crews scuttled their craft and bought passage on steamboats upriver. What had once been a three-month hike for many flatboaters, now took only days. These reduced labor costs saw flatboat labor costs plummet and profits boom. In some cases, steamboats would also drag flatboats bringing cargo upriver allowing flatboat operators to profit on the return journey as well. The utilization of steamboats caused the flatboat industry to increase from 598 arrivals in New Orleans in 1814 to 2,792 in 1847.[8]

The steamboat also changed the nature of flatboat crews, making them more professional and more skilled. Steamboats allowed flatboat crews to make multiple journeys per year meaning that a crew could earn a living wage simply by flatboating. These crews were known as "agent boatmen" as opposed to the earlier "dealer boatmen" or "peddler boatmen" for whom flatboating was only a seasonal job. This change ended up benefitting the flatboat industry significantly because it seriously reduced wreckages and lost cargo. Along with river improvements, experienced flatboat crews were able to reduce cargo losses from $1,362,500 in 1822 to $381,000 in 1832.[8]

The flatboat trade stayed vibrant and lucrative throughout the antebellum period and was aided by steamboats and later railroads in returning crews upriver. However, these technologies which earlier made the flatboat trade significantly more efficient would eventually overtake the flatboat trade along the Mississippi and render flatboats obsolete. Steamboats and railroads simply carried freight much more quickly than flatboats and could bring cargo upriver as well as downriver. By 1857, only 541 flatboats reached New Orleans down from 2,792 in 1847 and even lower than the 598 flatboats that travelled down the Mississippi in 1814.[6] 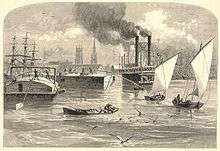 Flatboats among the river traffic at New Orleans, 1873