For other uses, see Keele (disambiguation).

Keele is a village and civil parish in northern Staffordshire, England. It is approximately three miles (5 km) west of Newcastle-under-Lyme, and is close to the village of Silverdale. It is the location of Keele University (at grid reference SJ817450) and Keele Services (grid reference SJ806440), a motorway service area on the M6.The university partly surrounds the village. 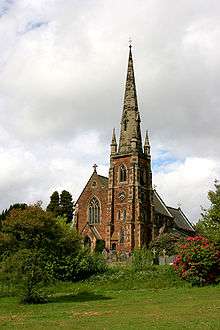 According to the 2001 census the parish had a population of 3,664,(increasing to 4,129 at the 2011 census) most of whom were students at Keele University. Some of these students are located at the Hawthorns.

It is located in the Keele ward of the borough of Newcastle-under-Lyme.

Keele is featured on the UK 'Here and Now' edition of the board game Monopoly, released in September 2007, It takes the place of Fleet Street in the traditional version.[2]