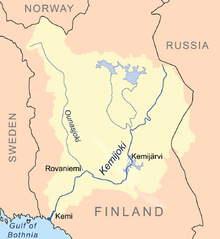 Map of the Kemijoki basin 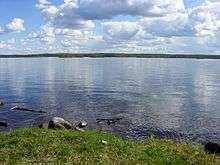 The Kemijoki about 30 kilometres (19 mi) downstream of Rovaniemi

Kemijoki (Swedish: Kemi älv, Northern Sami: Giemajohka), with its 550 km (340 mi) length, is the longest river in Finland. It runs through Kemijärvi and Rovaniemi before reaching the Gulf of Bothnia at Kemi.[1]

At Rovaniemi the Ounasjoki river merges with Kemijoki.

The first hydroelectric plant on Kemijoki was constructed in 1949 at Isohaara. A total of 15 power plants have been constructed so far. The plants are owned by Kemijoki Oy and Pohjolan Voima Oy. In 2003 the plants produced a total of 4.3 TWh, which was about 34.5% of Finland's total hydroelectric production.